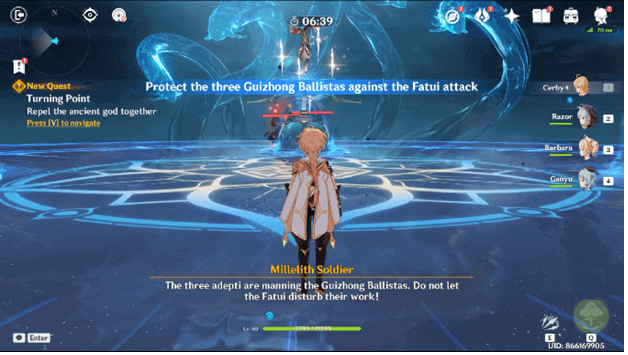 After you have previously intercepted Childe at the Golden House, the Gnosis was never in there as he attempted to get it from the corpse of Rex Lapis.

Childe has prepared his backup plan by summoning an Ancient God using their Fatui-forged Sigils of Permission.

Now faced with a common enemy along with the Qixing, Millelith, and Adepti will now face off against this great foe.

How To Get Turning Point Quest?

You will begin the Turning Point quest immediately after the last cutscene during the Heart of Glaze quest, putting you in a battle against Osial, Overlord of the Vortex. 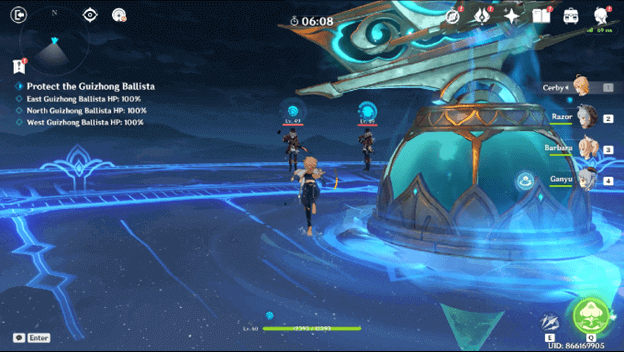 Repel the Ancient God Together

At the beginning of the battle, the Adepti will already have set up an upgraded Guizhong Ballista, but the Fatui begin to attack.

A timer starts at 6:40 minutes, which requires that you protect each Guizhong Ballista (there will be 3) and waves of Fatui will begin to spawn.

You will need to face off against the Fatui as the timer runs out and during the fight, the Adepti will begin to provide you with buffs to help you fight them.

Osial will occasionally send out projectiles which you will need to avoid during the battle, which can be done by dodging or running out of the way.

Continue fighting off the Fatui with the powers provided until the timer has run out and another cutscene will begin.

During the cutscene, the Adepti blast Osial with a powerful attack that only makes it angrier, causing it to charge up a devastating attack. 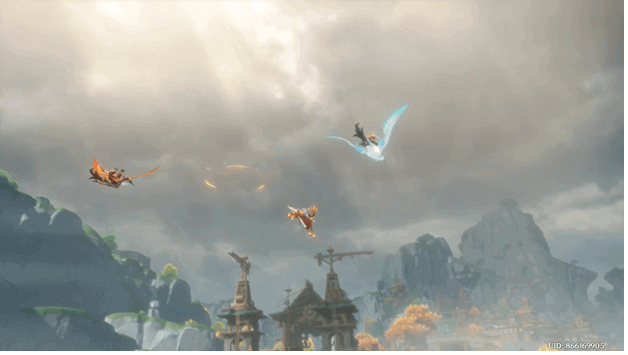 The platform you are on is destroyed but the Adepti manage those have fallen off which leaves everyone vulnerable.

Ningguang decides to sacrifice the Jade Chamber to defeat Osial, which results in you destroying it, causing its debris to fall on the ancient evil.

The end of the cutscene shows the destroyed Jade Chamber and everyone flying away safely, ending the quest afterward.

After you have completed the Turning Point quest, you will receive Adventure EXP, and Mora as well as additional rewards.

You will also unlock the achievement “Farewell, Archaic Lord”. 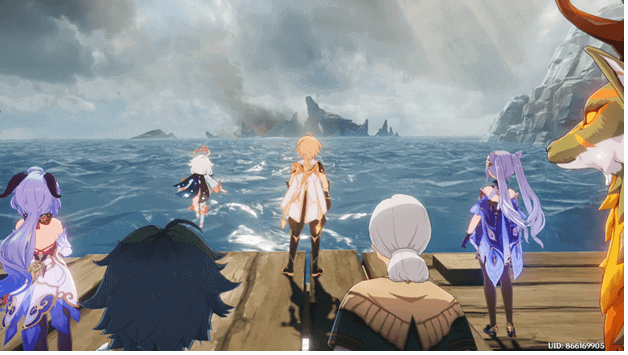 With the combined power of the Qixing, Millelith, and the Adepti, Liyue Harbor has now been saved at the cost of Ningguang’s prized Jade Chamber.

While things have come to the point where Liyue Harbor has shown its ability to protect itself, the Adepti can now focus on other things and less on the people, ending the contract.

Thanks to your help, the battle against the Overlord of the Vortex was victorious with minimal casualties and everyone in Liyue Harbor is now safe.