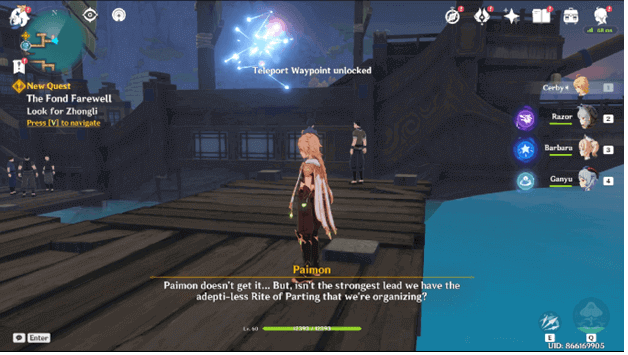 After you have previously defended the Jade Chamber with the other Adeptis and Qixing, you may now go back to Liyue Harbor and participate in the Rite of Parting.

It is time that you head back and search for Zhongli and begin the Rite of Parting for Rex Lapis, which later reveals a lot.

Things may have turned out differently than what everyone expected and finishing the Rite of Parting has a lot to play in someone’s plan.

How To Get The Fond Farewell Quest?

The Fond Farewell quest will begin after you have completed the Turning Point quests, where you fought Osial, the Overlord of the Vortex. 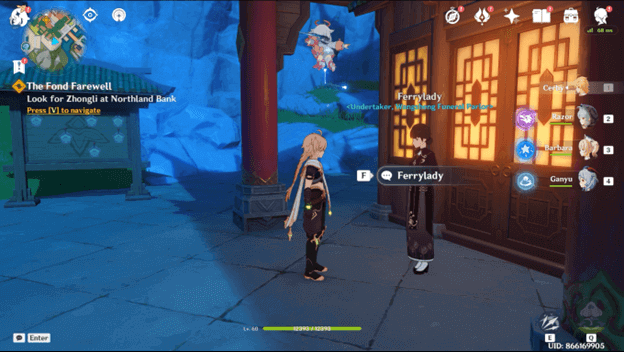 You will need to find Zhongli and your best bet is to look for him at the Wangsheng Funeral Parlor but by talking to the Ferrylady, it turns out he isn’t there.

The Ferrylady tells you that Zhongli is not around and has gone to the Northland Bank, which is where you will need to go next.

2) Look for Zhongli at the Northland Bank

A waypoint will mark the location of the Northland Bank and you will need to head over to find Zhongli and speak to him.

Enter the Northland Bank and a cutscene begins where Zhongli is having a conversation with Childe and Signora.

It appears that Zhongli had the Gnosis with him all along and for some reason, he has given it to Signora as a part of a contract.

It turns out that Zhongli was the Geo Archon after all and this appears to be his last contract, ending all other contracts. 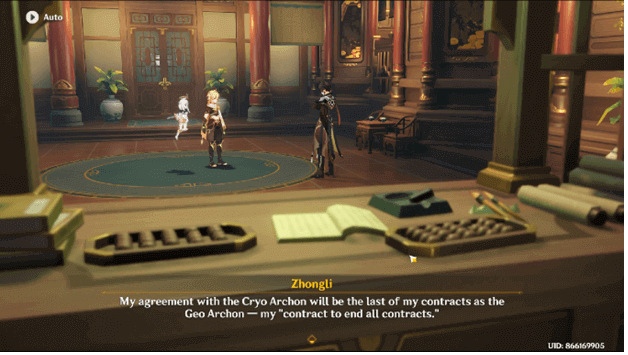 You will be leaving the Northland Bank after the cutscene and since you have prepared for it, it would be a waste if you didn’t attend.

Now you will need to go to Yujing Terrace and speak to two of the citizens who are around talking to each other.

5) Listen to the Millelith Announcement

Shortly after you listen to the group of citizens, you will need to head to the Yujing Terrace where the Millelith Sergeant will be giving an announcement.

6) Go to the Site of the Rite of Parting

After a short announcement, you will need to go upstairs where the Rite of Parting is being held and a cutscene will begin.

You will see Ningguang, Keqing, and Ganyu who lead the Rite of Parting and in return for your help, you simply ask for help putting up some missing person posters.

7) Talk to the People Taking Part in the Rite

After the cutscene, you will need to speak to 3 of the people who are taking part in the rite which can be done but walking up to them and interacting.

8) Look for Zhongli at the Scene

After you have talked to the locals, you will find Zhongli not far from the site where the Rite of Parting is and will need to talk to him.

Zhongli explains a lot of what’s been going on, and he will tell you more about one of the Gods in Inazuma and the quest comes to an end afterward.

After you have completed The Fond Farewell quest, you will receive Adventure EXP, Mora, and other additional rewards.

You will also unlock the achievement “Final Farewell’’. 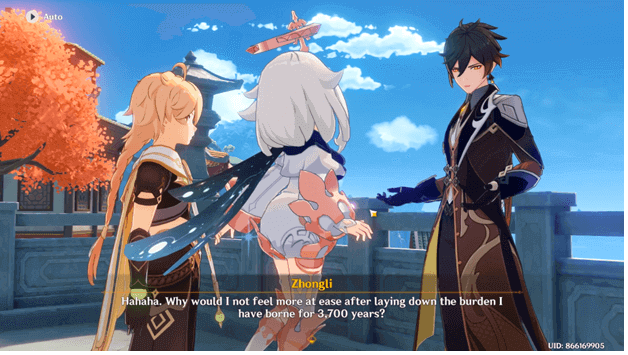 It turns out that after everything that has been going on, Zhongli was the Geo Archon and this was his way of leaving Liyue.

You will also find out about the revelations between Signora, Childe, and Zhongli that can help you on your future journey.

Zhongli also gave you an idea about the Gods that reside in Inazuma which is the Electro Archon also known as Baal, setting you off to your next destination.