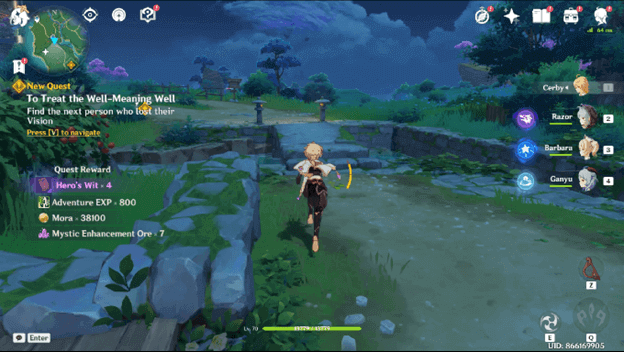 Previously you helped a man named Tejima as one of the requests from Kamisato Ayako and will now move on to the next one.

During this quest, you will be helping Kurosawa, a samurai who has nothing to do with the accusations that are being made against him.

It seems that Kurosawa lost his memories too, so you will find a way to find out if the accusations are false and if he is a bad person or not.

How To Get To Treat the Well Meaning Well Quest?

To Treat the Well Meaning Well quest will begin once you have accomplished The Meaning of Meaningless Waiting, continuing your efforts to fulfill Kamisato Ayako’s wishes. 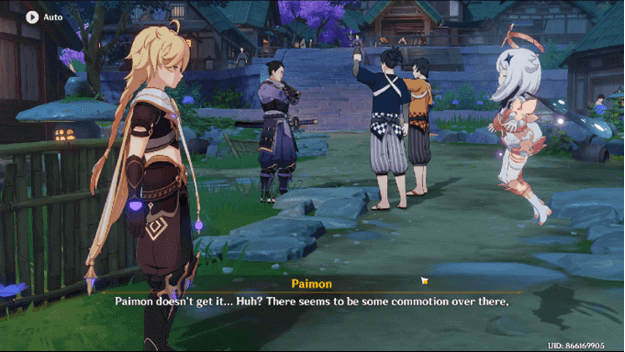 1) Find the Next Person Who Lost their Vision

You will need to head over to the marked area on your map and can get there faster by teleporting if you have unlocked a Teleport Waypoint near it.

Head over to the group of people causing a commotion to start a cutscene, which shows citizens accusing Kurosawa of withholding emergency provisions.

When the scene ends, speaks to Kurosawa, but he still claims that he doesn’t know anything about any emergency provisions.

After conversing, you will find out that he’s like Tejima, who can’t remember anything also and feels like someone owes him something.

To top off his day off, his house was robbed by the Treasure Hoarders, and you will need to find out and see if they found any of the stolen emergency provisions in his house.

Head northwest, and you will find the Treasure Hoarders standing by a tent on the beach, as you approach them, you will get a scene.

The treasure Hoarders seem pleased with their efforts and after a bit more gloating among themselves, you will need to teach them a lesson.

You will need to defeat all the Treasure Hoarders and afterward, a cutscene will begin where you interrogate them.

5) Talk to the Treasure Hoarders

You will ask them about Kurosawa’s House and the missing provisions, and they will tell you that it had nothing in it.

The only thing that they found was IOUs, it looks like they are for the general goods store owner, you will need to go to check what they are about.

Use the Teleport Waypoint to get back to Inazuma City, and head to the General Goods shop to the southwest.

Speak to Aoi and you will talk about the IOUs where she will explain to you that Kurosawa would often come and buy large quantities of food.

It seems that prices have skyrocketed and the salary he’s on can’t pay for it so that’s why he has been purchasing with IOUs.

Head back to Kurosawa and talk to him for another scene and you will ask Kurosawa where everyone has gone.

It looks like Kurosawa gave them a choice to leave or he would draw his sword, which caused them to leave him alone.

You will tell him about your encounter with the Treasure Hoarders and your conversation with Miss Aoi revealing what his true intentions were.

Kurosawa will not remember but will tell you about his past and end up understanding but is still left confused and troubled.

Paimon suggests you talk to Thoma about Kurosawa’s debt as he will certainly be able to help, and the quest comes to an end.

After you have completed the “To Treat the Well-Meaning Well” quest, you will receive Adventure EXP, Mora, and other additional rewards. 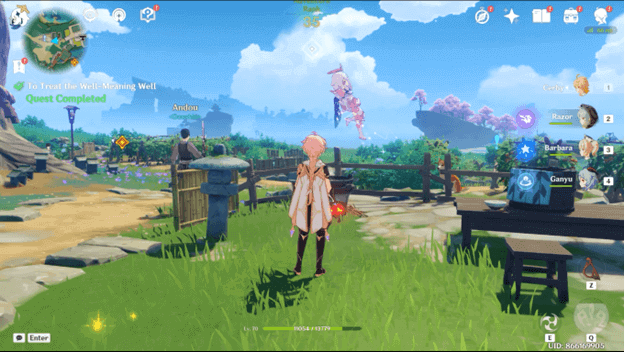 It looks like Kurosawa didn’t know about his past because of his lost memory when his Vision was taken, and it turns out he was a nice person after all.

Kurosawa had been purchasing provisions for the people at his own expense but ended up in debt due to the lack of funds.

Perhaps sometime later things will be cleared out with the help of Thoma and somehow Kurosawa may continue being the decent person he is.