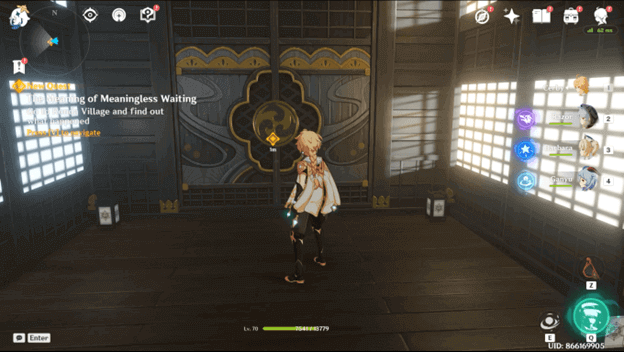 After you have previously agreed to fulfill the three wishes of Kamisato Ayako, now you’ll be going to Konda Village to see a man who had his Vision stolen.

During this quest, you will have to convince Tejima to stay in this town, because the people in this village depend on him.

It appears that you will have to rediscover his reason for being here in this village and find clues to his memory that can convince him.

How To Get The Meaning of Meaningless Waiting?

The Meaning of Meaningless Waiting quest is the first of Kamisato Ayako’s requests given to you after accepting to help her during the Three Wishes quest. 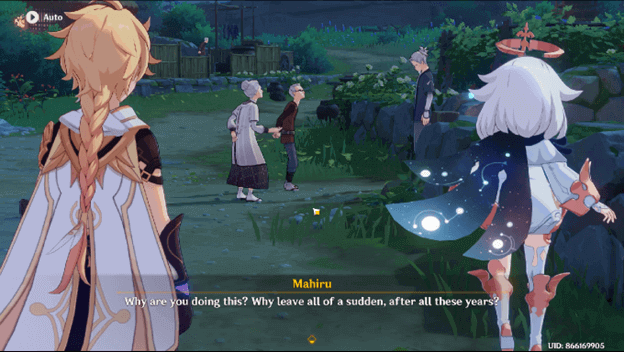 1) Go to Konda Village and Find Out What Happened

Once the quest begins you will need to exit the Yanshiro Commission Headquarters and make your way to Konda Village.

You can use a Teleport Waypoint if you have already unlocked one nearby to reach the location faster and will need to follow the waypoint.

Upon arriving a cutscene will play where an old couple is talking to Tejima, who seems to be planning to leave Konda Village.

2) Ask the Crowd for News

Speak with the old couple, who are known as Kenjirou and Mahiru to find out more about the reason for Tejima’s leaving.

The old couple will tell you about the past and how much Tejima has done for them, showing how important it is that he stays.

3) Talk to Tejima and Find Out What Happened

Once you have finished speaking with the two villagers, you will need to talk to Tejima to find out what has changed.

Tejima tells you the reason why he wants to leave the village, but some things are left out as he has lost his memory due to his Vision being taken.

4) Find the Clues to Tejima’s Memory

Head over to the nearby location marked on your map and search for clues in the area, you will find a log which is later revealed to be his diary. (it will be next to a Lavender Melon to the left)

It is later revealed that he frequently visited the nearby shrine, which gives you a clue to where to look next to find out more.

5) Go Investigate the Shrine Nearby

Head up to the shrine nearby that is marked on your map and examine the marks on the shrine, which will bring you to yet another clue. 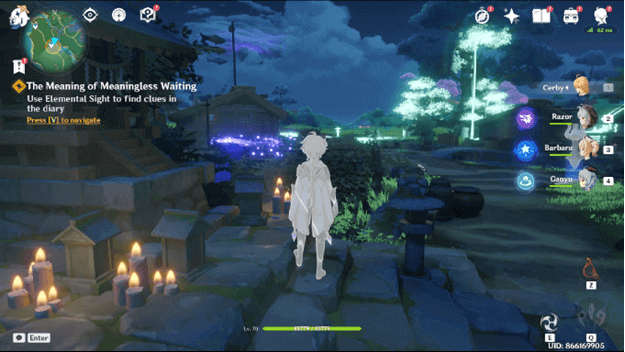 6) Use Elemental Sight to Find Clues in the Diary

You will need to use your Elemental Sight to follow the energy which will eventually lead you behind the house next to a tree with three small rocks next to it.

When you are in the place you will see the “check” and interact with it for a cutscene, Paimon will suggest you dig it up.

After you have finished digging, you will find a small box containing a letter, and it seems it is important to Tejima.

You will need to speak with Tejima once again where you will show the letter that he has buried, and this will begin to change his mind.

Eventually, after your efforts, Tejima will decide to stay and this solves the issue, which results in the quest coming to an end.

The Meaning of Meaningless Waiting Rewards

After you have completed The Meaning of Meaningless Waiting quest, you will receive Adventure EXP, Mora, and other rewards. 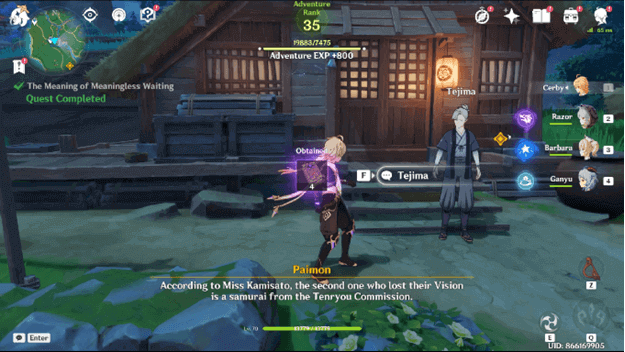 It turns out that the reason Tejima had lost his memories is the loss of his Vision but with your help, he found the reason to stay.

Since the village depended on his staying, you not only helped one person but the whole village in the process of your actions.

One of Kamisato’s three wishes was completed, and now you can head off to do the next one to gain her favor.