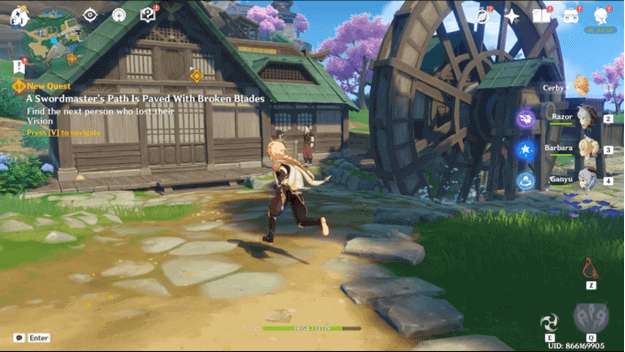 You previously fulfilled two of Kamisato Ayako’s wishes, which set you out to help Kurosawa during the second one, and are now set off to help a third person.

During this quest, you encountered an old swordmaster who has lately been having some issues along with the fact that his Vision was taken just like the others.

It seems that during this quest, you will find that things are more troubling than the previous people that you have helped.

How To Get A Swordmaster’s Path Is Paved With Broken Blades?

A Swordmaster’s Path Is Paved With Broken Blade quest will begin once you have completed To Treat the Well-Meaning Well quest.

A Swordmaster’s Path Is Paved With Broken Blades Quest Objectives 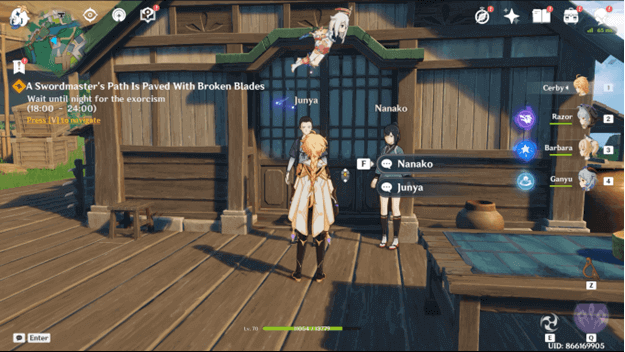 1) Find the Next Person Who Lost their Vision

The third request from Kamisato Ayako brings you to yet another visionless person and this one has a more severe problem than the others.

You will need to head towards the waypoint marking where his dojo is and upon arriving, a cutscene will begin where his students explain what is happening.

It turns out, he is believed to be possessed and you have decided to watch his exorcism to see what goes on and find out what the problem is.

You will need to wait until night by adjusting the time in using the Paimon Menu and talking to Junya again for another cutscene.

Talk to Junya once the time is between the specified range and she will tell you that his sensei is whispering out names of men he defeated in the past.

He also mentions his senior named Anzai who defeated him in a duel, and while Junya fetches some water, you spot someone skulking near the house who runs away.

You will need to find the traces of the suspicious person and can do this easily by following each waypoint marking where you need to reach.

5) Talk to the Suspicious Person

Once you have reached all the waypoints, head over to the person marked by your waypoint to speak with him.

He will explain why he is lurking around, which is because he heard the rumors of what happened to his old rival.

6) Return to the Exorcism Site

Head back down the ramp, and to the dojo for a scene, and it will be found out that he is not possessed after all and may have just lost his mind.

She suggests heading to the Grand Narukami Shrine and speaking to Lady Yae as she has taken an interest in the case.

The Grand Narukami Shrine can be found in the northern part of Narukami Island and you can teleport there if you have the Teleport Waypoint unlocked.

Head behind the building for a scene where Nanako will ask Lady Yae if the sensei is possessed, and Lady Yae will say that he is indeed not possessed.

Anzai appears and speaks to Domon, which later on results in his sanity being returned in some way, solving the issue and completing the quest.

A Swordmaster’s Path Is Paved With Broken Blades Rewards

After completing A Swordmaster’s Path Is Paved With Broken Blades quest, you will receive Adventure EXP, Mora, and additional rewards. 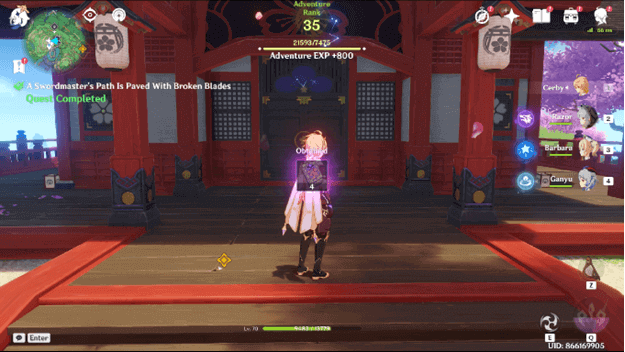 It appears that Domon was not possessed by an evil spirit, and he’s suffering from a spiritual collapse due to the loss of his Vision.

What seems to have been a conflict filled with guilt and insanity has ended with a calmer ending, which means Domon’s students can continue their training.

As you have accomplished the three wishes of Kamisato Ayako, you will now report back to her to continue with your goal.