A Donation Chest (Vendor) has been set up in the Last City and Guardians can now put their treasure to good use by providing help for the Eliksni Quarter.

Throughout the event, the Donation Chest can be accessed for players to get several rewards by donating Captain’s Coins.

You can obtain Captain’s Coins in several ways and these will come in handy later when you exchange them to get rewards for your efforts.

Where to Get Captain’s Coin?

You can obtain Captain’s Coins almost anywhere during the event by doing a lot of activities as you play through the game.

While there are certain ways to get Captain’s Coin on regular bases, some methods may get you larger amounts to maximize how much you can obtain.

How to Get Captain’s Coin?

Captain’s Coins may be obtained as long as the Donation Chest is present in the Last City and by doing various activities.

Below are the way how you can farm Captain’s Coin: 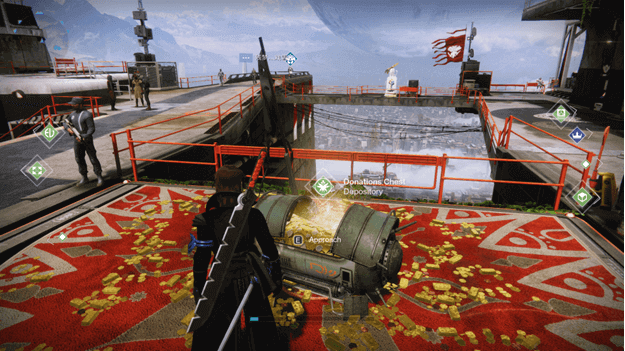 You can use Captain’s Coins at the Donation Chest and will be able to donate them to get rewards depending on how much you use.

Donating Treasure, which comes from Captain’s Coins as well as other Destination Materials will provide you with points that can be seen showing how much treasure you have donated.

You can see the total amount of treasure you have donated when accessing the Donation Chest and upon reaching a certain amount, certain rewards can be claimed.

The rewards can be obtained multiple times as long as you keep donating treasure and if you have Captain’s Coins, these can be used to make a certain purchase.

Captain’s Coins can be traded from an Eliksni Quarter Gift Box, which requires 1,000 each and can be obtained as many times as you like during the event.

Opening an Eliksni Quarter Gift Box can give you a Deepsight Resonance Weapon, Eververse Engrams, Blight Dust, or Glimmer.

A lot of rewards can be obtained by simply obtaining as many Captain’s Coins as you can, which can easily be done by playing the game regularly.

You can also farm Captain’s Coins by doing the activities mentioned above if you want to maximize the rewards you can get during the event.

Some of the best rewards you can obtain are Enhancement Prisms, Ascendant Shards as well as the other items from the Eliksni Quarter Gift Boxes.