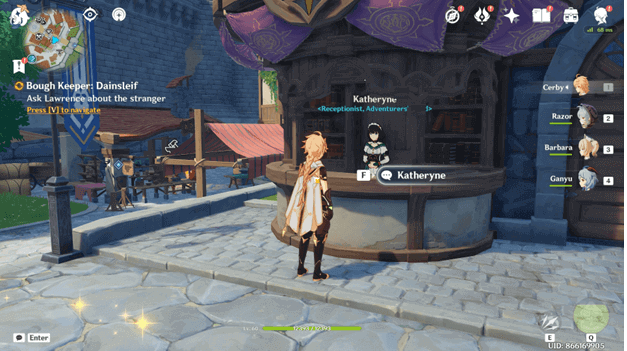 Bough Keeper: Dainsleif is a prelude quest to Chapter I Act 4 and has you searching to find someone who can help you on your adventures as you search for your lost sibling.

Although your search for a new stranger in town may seem to have been a quick task, a quick exchange of worlds leads to a bigger adventure.

Later on, you will find out more about the stranger and they seem to be very odd in a sort of manner which may have a bigger role later on.

You will get the Bough Keeper: Dainsleif quest once you have completed Chapter 1: Act 3 – A New Star Approaches.

1) Talk to Katheryne in Mondstadt

Use a Teleport Waypoint to go to Mondstadt where you will need to speak to Katheryne, who has something to tell you about a stranger who arrived at the city.

2) Ask Lawrence About the Stranger

After you talk to Katheryne, head to the front of Mondstadt near the bridge where Lawrence is located and speak to him.

During a quick dialogue, he will mention that he saw the stranger speaking to Wagner the blacksmith in town who might know something.

3) Ask Wagner About the Stranger

Head over to Wagner, who can be found by turning left as you enter from the front of Mondstadt, and you can find him by looking at the waypoint.

Speak to Wagner and he will tell you that you might be able to find the stranger drinking at Angel’s Share, which will be your next destination.

4) Ask Charles About the Stranger

Make your way to Angel’s Share and go inside where you will need to speak with Charles, who tells you that the stranger has pre-ordered some wine and may arrive soon.

Head up on the tavern’s second floor, and you will see a table and chair on your right side where you will need to sit.

As you sit down, a cutscene will play where Charles welcomes the stranger which will now allow you to approach him. 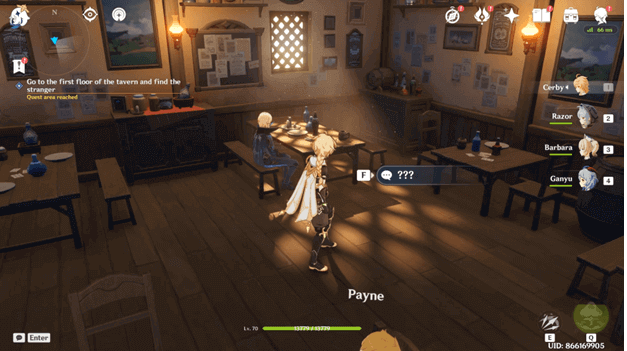 After the cutscene, head down to the first floor and speak to the stranger who is sitting alone by the corner to begin a dialogue with him.

During the dialogue, the stranger who is later known as Dainsleif will offer to join you for 500 Mora if you answer 3 of his questions.

No matter which answer you choose, the outcome will be the same and he will still join you after the dialogue has finished.

7) Go to the Temple of the Falcon

Dainsleif will tell you that he has a lead that leads to the Temple of the Falcon where the Abyss Order has activity before the dialogue ends.

After the dialogue, head over to the Temple of the Falcon, which you should be able to teleport to get there faster.

Speak with Dainsleif, who will be waiting out in front of the Temple of the Falcon, and a quick dialogue will begin before you can enter a new domain.

8) Enter the Temple of the Falcon

Once you are at the Temple of the Falcon, interact with it to view the domain menu and start the Abyssal Traces domain. 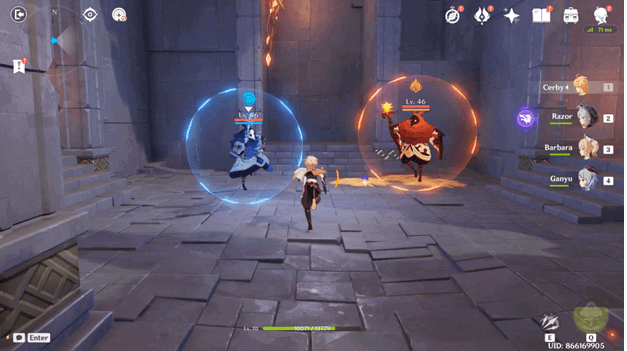 Head towards the waypoint marking your destination within the domain and you will eventually need to clear a room with Hilichurls inside.

Once the Hilichurls have been defeated, you will be able to interact with a mechanism that will open a nearby door.

The next room will have more Hilichurls and an Abyss Mage that you will need to defeat, which opens the next area.

Proceed to make your way toward the next waypoint and glide up a wind current and you will find two Abyss Mages in the next area.

Fight both to unlock the door nearby and afterward, a cutscene will begin where you will speak with Dainsleif.

Dainslief seems to be disappointed that there were just a few Abyss Mages, and it seems he was waiting for a more powerful enemy to appear, known as an Abyss Herald.

He tells you that the traces he’s following show that their next appearance may be within Wolvendom, which is where you will need to go next.

11) Leave the Temple of the Falcon

After the cutscene, you will now need to leave the Temple of the Falcon but don’t forget to open the Precious Chest before leaving.

You will need to head over to Wolvendom after leaving the domain and teleporting to the nearest Teleport Waypoint will save you some time.

Dainleif’s location will be marked on the map, and you will need to speak with him, where he tells you that the Abyss Order has left marks behind that need to be searched for. 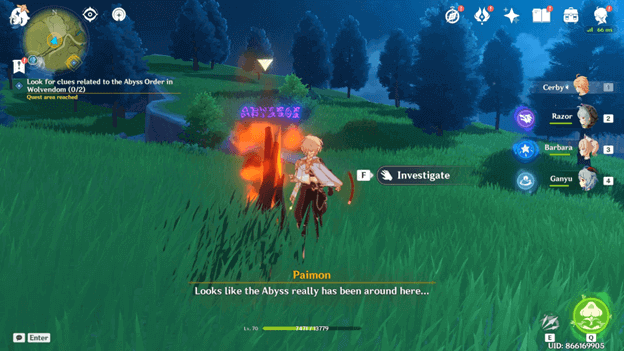 There will be two locations nearby marked on your map and you will need to search for the traces of the Abyss order at each of them.

You will find the markings that have purple glyphs and will need to interact with them to proceed, which causes enemies to appear.

Defeat the enemies near the markings and interact with them before you can head back to meet with Dainsleif nearby.

Dainsleif will be nearby and marked by a waypoint, he will mention that there is still one more place to go as you speak to him, which is in the Stromterror’s Lair.

Teleport to the Stormterror’s Lair and go across the bridge to meet with Dainsleif, which will begin a cutscene.

Dainsleif recalls his past when he first knew about the dragon and tells you to go deeper into the Stormterror’s Lair.

16) Go Deeper into the Stormterror’s Lair

An area will be marked on your map which you will need to head over to and there will be a group of Hilichurls and an Abyss Mage near the Light Actuator that you need to defeat.

17) Defeat All the Opponents

You will need to defeat all the enemies in the area and afterward more will appear, which you will also have to clear out.

After you have defeated all the enemies, a cutscene will begin where you discuss not being able to find the Abyss Herald.

As you’re talking, you notice something familiar and Dainslief will tell you to search at the top of a nearby cliff for what you have sensed.

There will be a nearby wind current that takes you to the top of the cliff where Dainsleif is waiting for you to speak with him.

Another cutscene begins where Dainsleif asks if you still sense the feeling nearby and if you will continue searching the area. 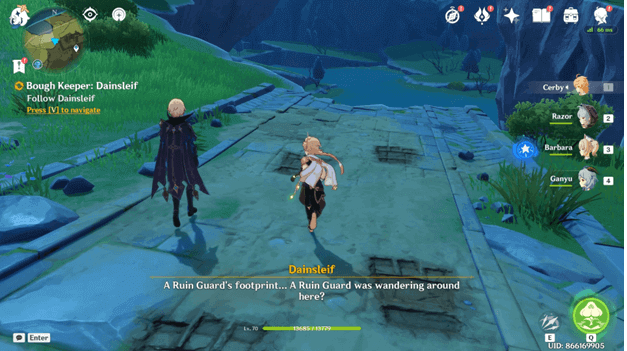 You will need to follow Dainsleif after the cutscene and there will be Ruin Guard tracks that lead to a Dandelion.

21) Go and Examine the Dandelion

Examine the Dandelion that Dainsleif is standing next to, which will begin a cutscene again which brings a flashback.

You will remember a battle that occurred, and the memory seems to have some connection to your sibling.

After the cutscene, a dialogue with Dainsleif begins where you talk for a bit and afterward, the quest will come to an end.

After you have completed the Bough Keeper: Dainsleif quest, you will receive Adventure EXP, and Mora as well as additional rewards.

You will also unlock the achievement “Gates of Destiny”. 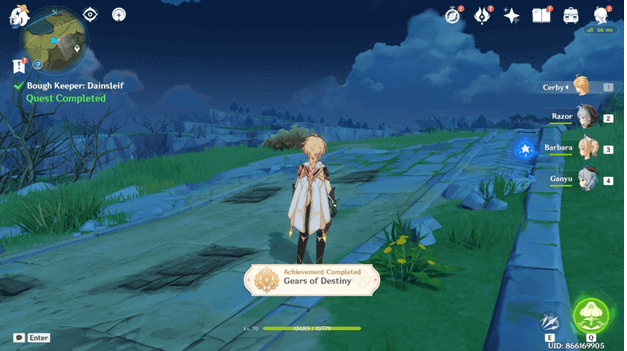 The search for the strange led you to meet someone who was quite knowledgeable about everything that has been happening.

It turns out they know even more as they seem to have witnessed things that have happened before your time in Teyvat.

Dainsleif will have taken his leave for now, but he is now officially on your team (while not exactly a character you own yet) and will be joining you as you venture into the future.