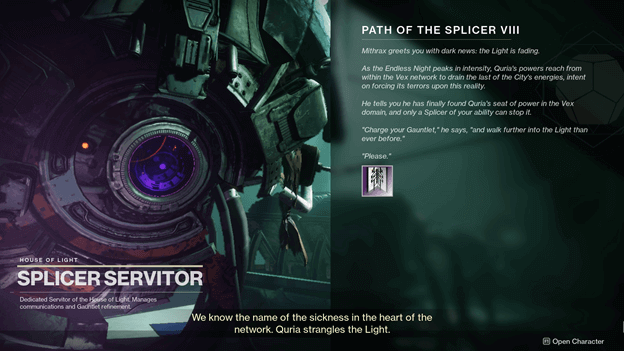 Path of the Splicer VIII is the final chapter of the fight against Quria and it is now time that you attempt to make the pursuit of her within the Vex network.

The Endless Night is intensifying and it is now or never that you face against this Quria before her power becomes too great.

Mithrax tells you that he has finally found Quria’s seat of power and it is time for only a Splicer of your ability, can defeat her. 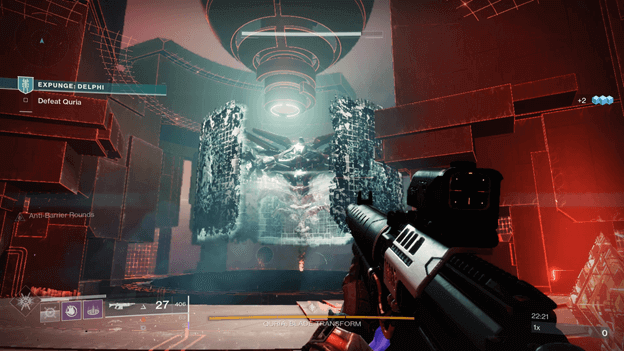 During this quest, you will face Quria, who Mithrax has discovered is the one to blame for the Endless Night.

Quria is the final boss in the Path of the Splicer questline and by farm probably the hardest one to kill due to multiple processes and the stronger enemies.

Before heading into the Vex network, you will need to make sure you have a Key Code, which requires you to obtain at least 50 Ether to craft.

Use Ether To Craft Key Code

Craft at least one Key Code to enter the current Override mission so that you can open the Conflux Chest at the end of the mission.

Participate in one Override mission and use a Key Code to open the Conflux Chest after defeating the boss at the end.

After completing an Override mission, you will need to complete the Expunge: Tartarus (Corrupted) mission which can be found on Europa.

Once you have completed the Expunge: Tartarus (Corrupted) mission, you will need to face Quria in the Expunge: Delphi mission and defeat her.

Return to Tower to Speak with Ikora Rey

Head back to the Tower after defeating Quria and speak with Ikora Ray to proceed with the quest.

Go to the Eliksni Wing and Receive Message from Lakshmi-2

You will need to receive a message from Lakshmi-2 by heading over to the H.E.L.M. after speaking with Ikora Rey.

Speak with Mithrax through Splicer Servitor

Once you have received the message from Lakshmi-2, head over to Mithrax and speak with him through the Splicer Servitor.

Path of the Splicer VIII Rewards

This quest concludes the Path of the Splicer story and in the end, you will be rewarded with Decrypted Data and an Umbral Engram.

Although things are not fixed right away after the defeat of Quria, Mithrax believes that in due time, there will be peace and harmony.