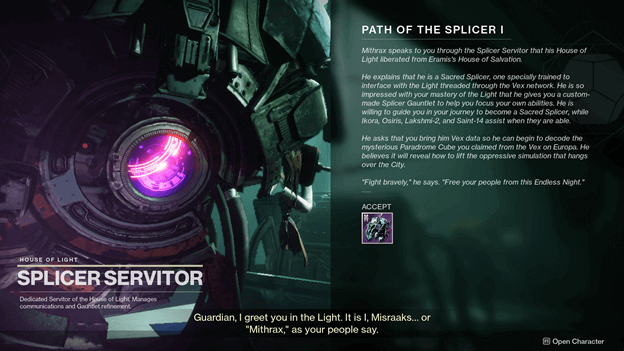 At the start of the quest, you will already obtain the Splicer Gauntlet, which will be used later on with your activities regarding splicing Vex networks and more.

If you are wondering how to get Path of the Splicer I, you simply need to head over to H.E.L.M. and will need to speak with Mithrax, who has taken over a Splicer Servitor.

The City has been brought into permanent darkness and it is up to you to figure out how you can put a stop to what is going on.

Your first step will be to craft a Key Code which can be done by heading to the quest tab and checking the details of your Splicer Gauntlet.

Creating the Key Code will require Ether, which is obtained by killing enemies but you should have some as you first start.

Your next task will be to complete an Override mission which can be done by selecting the mission from your map of H.E.L.M.

You will then be teaming up with other players to complete the mission and will have to use the Key Code to open a Conflux Chest at the end.

Without a Key Code, the Conflux Chest cannot be opened, so make sure you craft one before heading over to the mission or simply craft it whilst inside.

Head over to Ikora Ray to debrief and discuss what the next step will be regarding the situation and the Eliksni that have moved nearby.

Head back to H.E.L.M. and follow the waypoint which leads to a hologram projector that you will need to interact with.

You will start getting a transmission from Lakshmi-2, revealing insight about it taking a look into the future, and later on leading to the decision to alter the future.

After receiving the transmission, head back to Mithrax (Splicer Servitor) and speak with him to learn more about what was discovered from the Vex data.

Once you have spoken with Mithrax, you will need to upgrade your Splicer Gauntlet to complete the quest.

To upgrade your Splicer Gauntlet, simply interact with it via selecting it from the Splicer Servitor’s screen.

This serves as a basic tutorial about Override missions and how to use your Splicer Gauntlet for later on when continuing with the Season of the Splicer content.

Characters share a single Splicer Gauntlet, making completions with one character the same with another, saving time from repeating.

As you will be doing your first Override mission, it’s best you gear up first and prepare for a tougher battle before starting.

Destiny 2: How to Open Eververse Engrams