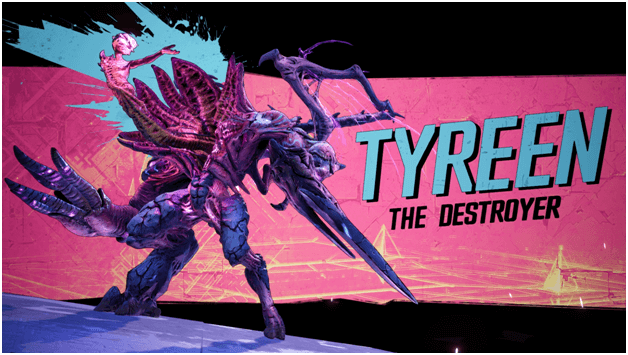 Tyreen The Destroyer is known to be the final boss in the Borderlands 3 and serves as the last enemy you face before the story ends.

It is the combination of Tyreen Calypso after she has absorbed the destroyer, causing them to become one and making her an abomination. 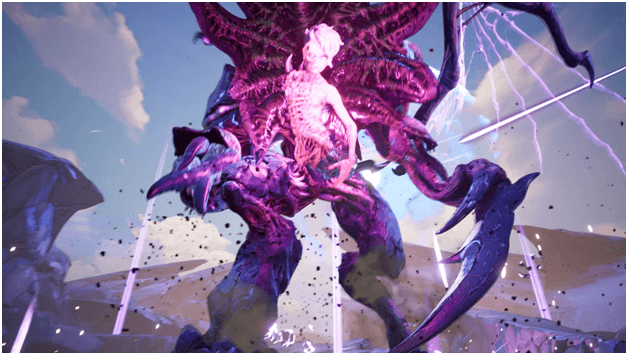 As you journey towards the end of Borderlands 3, you will finally confront Tyreen Calypso during the Divine Retribution mission which is located in The Destroyer’s Rift  but at this point she will already have absorbed The Destroyer and is now a stronger and deadlier foe that you must vanquish in order to prevent catastrophic events from occurring. 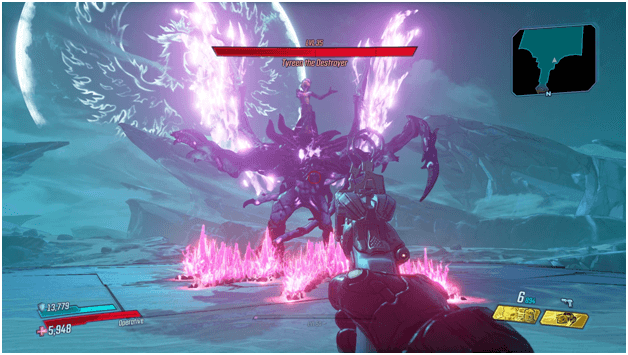 Tyreen The Destroyer may seem like a very strong boss but this doesn’t mean she is difficult to kill as she follows only does a simple set of attacks and has an easy to remember way of defeating her.

Most of the time you will be able to shoot The Destroyer’s body which Tyreen has assimilated with but at times your attacks will be immune, forcing you to target her weak spot on her back when she rests. 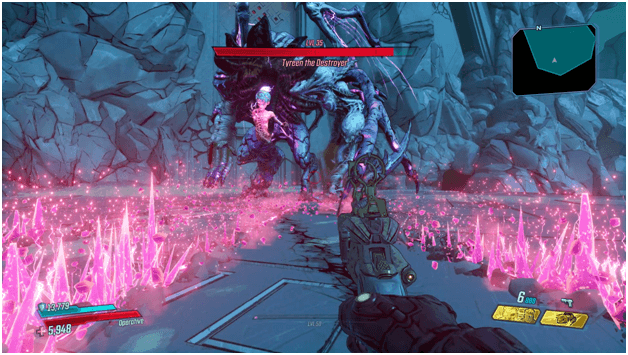 She will regularly use different attacks which may be either area of effect attacks, direct attacks or attacks that are easy to dodge.

Whenever she does an attack, you can easily see how to evade it and some of her attacks can even be endured if you have the right gear. 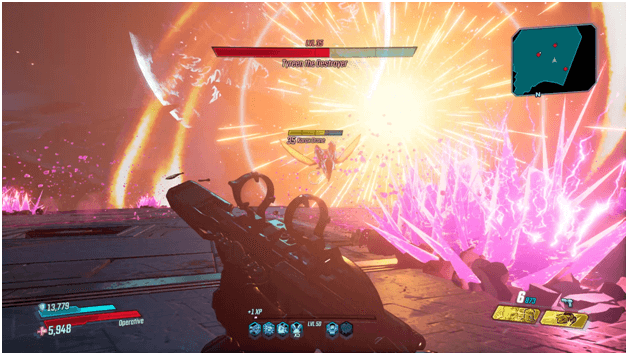 During the fight, there will be Korax Drones which you can take out when there are too many or save for when you need to revive yourself via second wind. 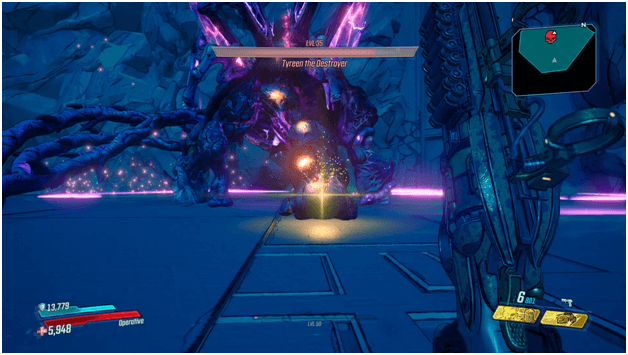 Whenever Tyreen The Destroyer sustains a large amount of damage, basically her health bar going into different fractions of itself, she will bow down and attempt to take a quick rest which will give you an opportunity to strike. 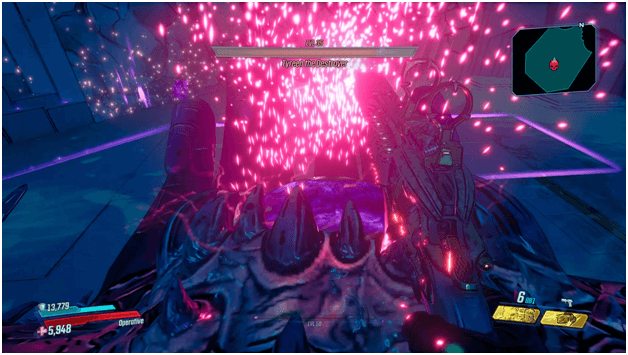 You can climb up her back and will notice a glowing area on it which you can shoot in order to deal a large amount of damage and even force herself out of The Destroyer’s body for a period of time. 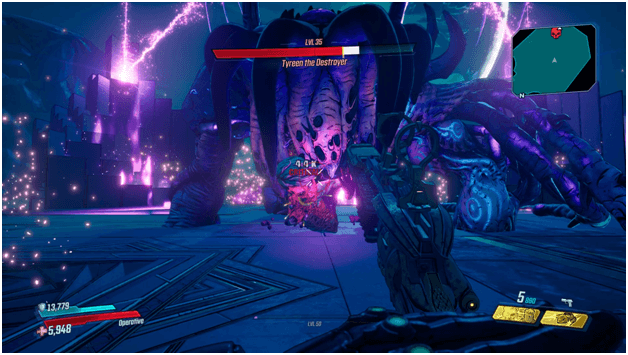 When you shoot the part of her back which is vulnerable while she is resting, her true self will be forced out and you can take an advantage of this in order to deal damage to her. 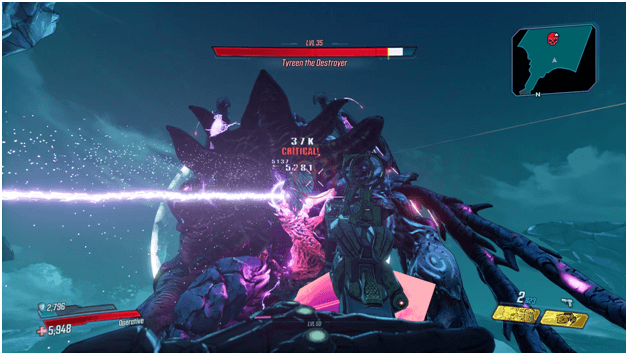 Occasionally, Tyreen will exit The Destroyer’s body in order to either taunt you or to attack you which gives an opening to hit her.

She will take critical damage if you hit her head while she is out of The Destroyer’s body, granting a higher amount of damage and giving you the opportunity of killing her easily. 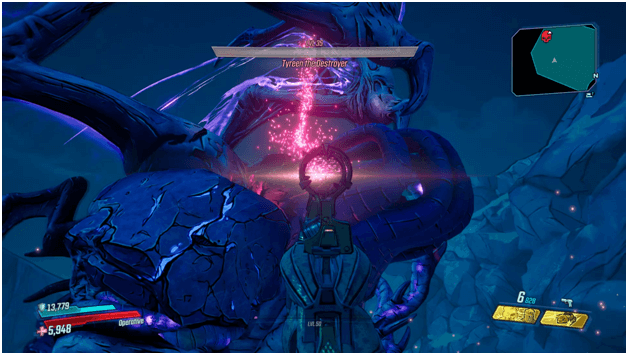 When Tyreen is resting, usually from getting her health reduced at a certain point, the glowing part on her back becomes vulnerable and will deal a critical hit.

Aside form trying to get up on her back when it is open, you may instead shoot it from a distance to get the same effects. 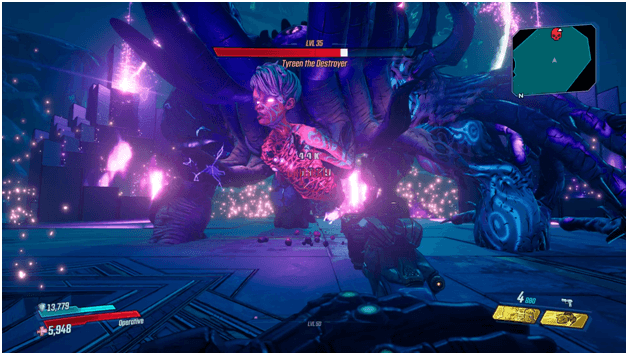 While Tyreen exits her body due to the weakness on the back taking damage, she gets ejected for a short time, allowing you to deal critical damage to her when shooting at her. 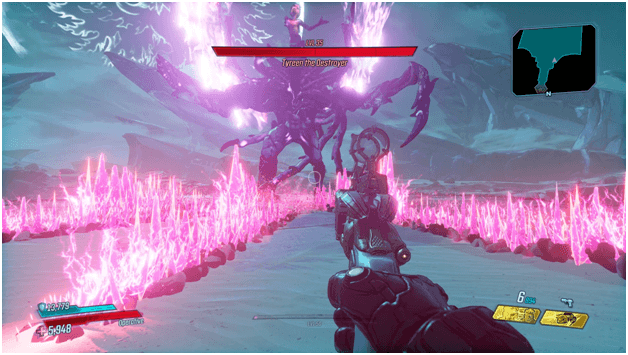 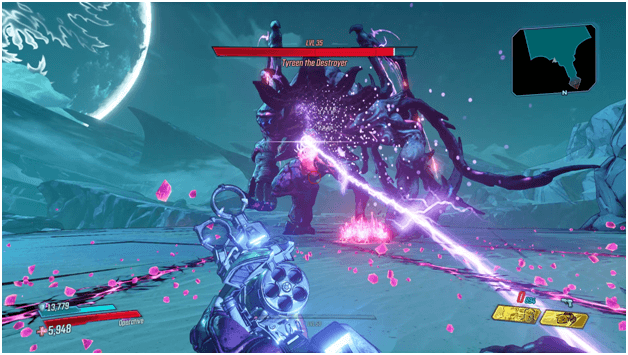 Tyreen will expose herself and shoot out a laser in an attempt to hit you to deal successive damage over time.

You can either get out of the way, make distance or take shots at her, mainly her head in order to deal a large amount of damage and eventually force her back inside. 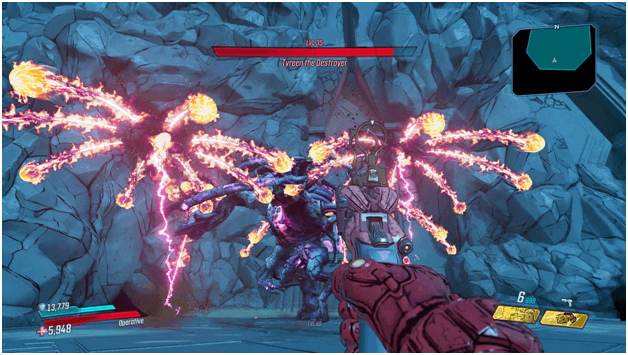 After releasing large orbs, these explode into smaller ones which deal area of effect damage in an area where they land.

To avoid this, keep your distance or move away from where the smaller orbs will land. 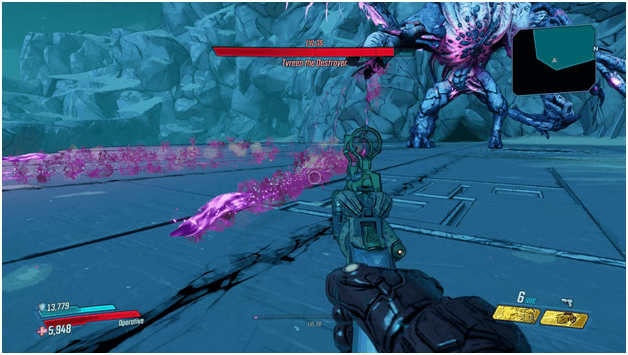 Tyreen The Destroyer will attempt to fire underground spikes to damage you which is meant to set you up for a large Eridian shard that explodes.

This is very slow and can be dodged and pretty much serves as a distraction for when she released an Eridian shard at you. 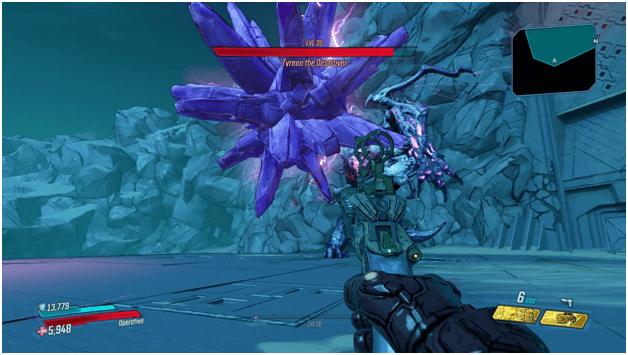 Tyreen The Destroyer will lob an Eridian Shard or bomb at you which explodes on impact in an area around where it lands.

This may be hard to dodge as it follows after another attack but can be ignored due to the low damage or simply avoided with a slide or fast movement speed. 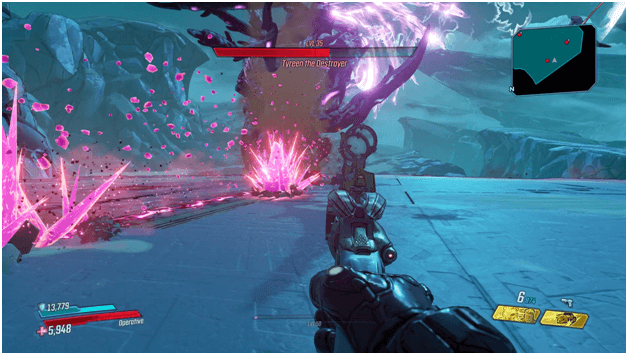 Tyreen The Destroyer will release shockwave after shockwave which move forward in a straight line in order to damage you.

This is another slow attack of hers and can be easily avoided by moving out of the way. 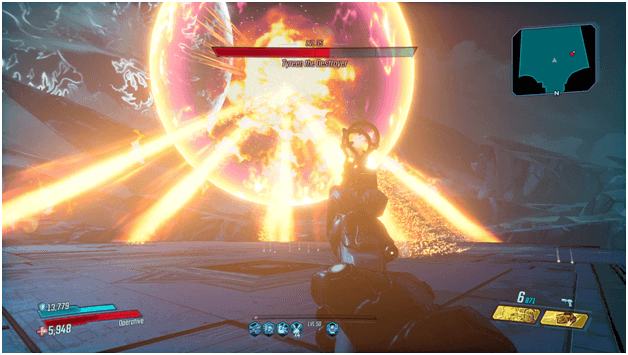 Tyreen hovers in the air, shielded and released several lasers that deal damage if you stay in their trajectory.

This may be a bit tricky to avoid as they keep moving but instead of running away, head towards her and slider or run past the lasers to stay out of her way as she will move in one direction. 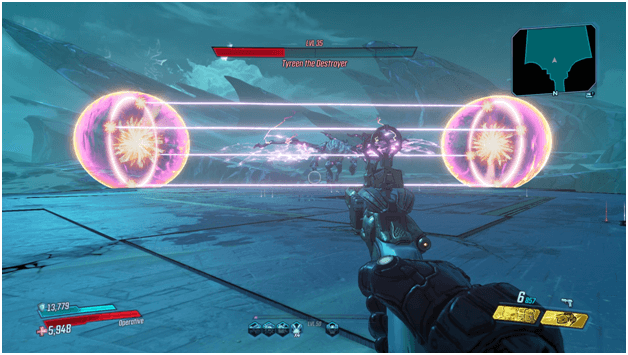 Two orbs are released and head towards your direction, forming 4 lasers that circulate which deal damage to you if you come in contact with it.

Imagine your using a jump rope, head towards the beams and simply jump over them when the time is right when they get near you. 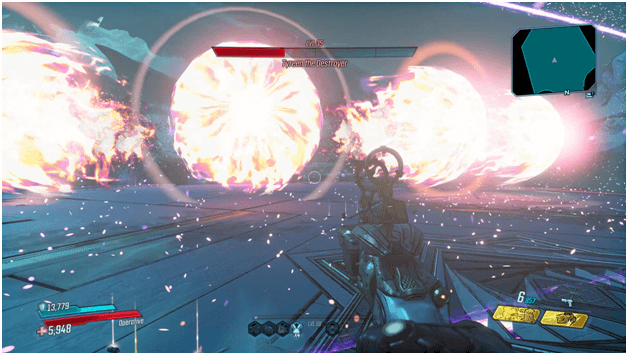 Several orbs are unleashed towards your direction in a splitting motion, heading outwards until one come in contact with you to deal damage.

To evade this, simply stay out of range and move in between two of them to avoid getting hit. 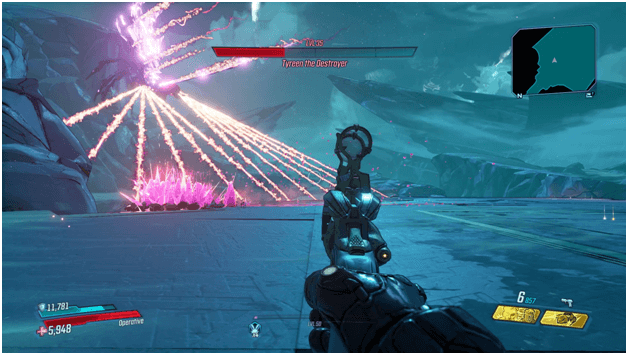 Tyreen The Destroyer will fly across the boss fight area, spreading out lasers that damage anything in their path as she moves along with them.

To dodge this, simply move out of the center of the boss fight area or move in between the lasers as Tyreen The Destroyer flies by. 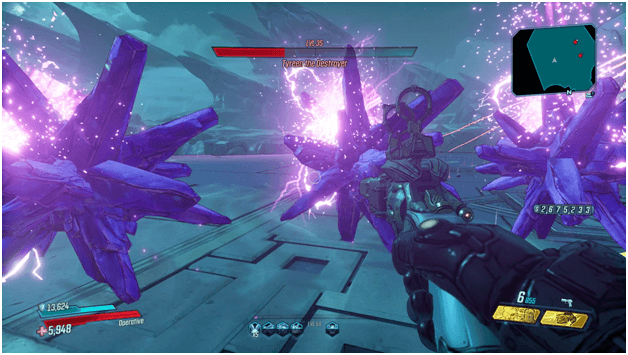 While flying across the area, usually accompanied with lasers, Eridian bombs will drop in a line and explode after a small amount of time.

To avoid taking damage, simply move away from the bombs that have been dropped by Tyreen The Destroyer. 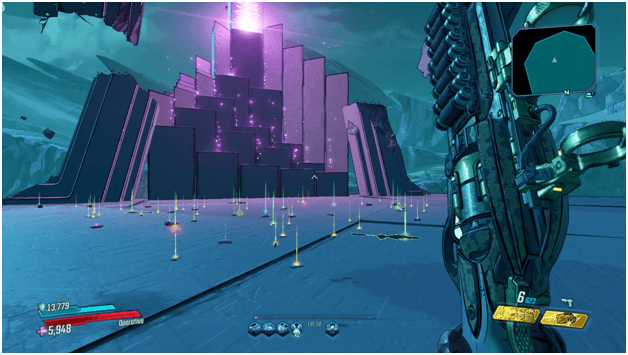 Tyreen The Destroyer will usually drop uncommon to epic gear but has a chance to drop the “King’s Call” or the “Queen’s Call” legendary pistols. 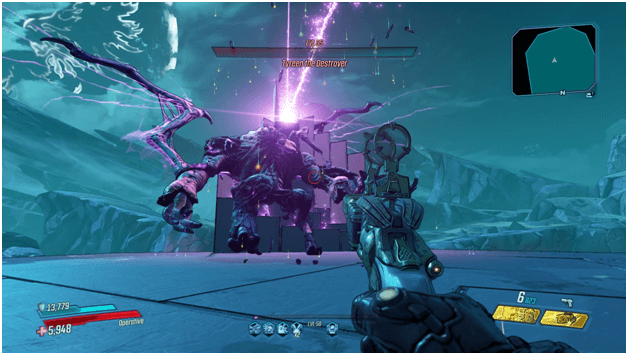