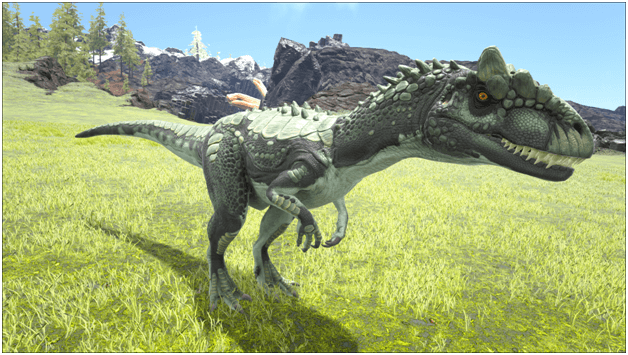 Allosaurus Therotribus is a carnivore that was seen in the late Jurassic period that has an aggressive temperament.

These creatures alone can be very deadly and to make things seem impossible to survive, when more team up, they can take down some of the largest creatures ever to walk the island.

Mostly seen roaming plains, jungles and near mountains, these creatures often travel where there are barely any objects that can block it, giving it a good view of the area and unobstructed sprinting.

Once a human or any creature smaller than the Allosaurus is detected, it will immediately go for the kill, sprinting towards its prey and showing no mercy.

Tribes who have tamed such creatures have been known to utilize them to kill creatures and humans alike due to the damage they can do in groups. 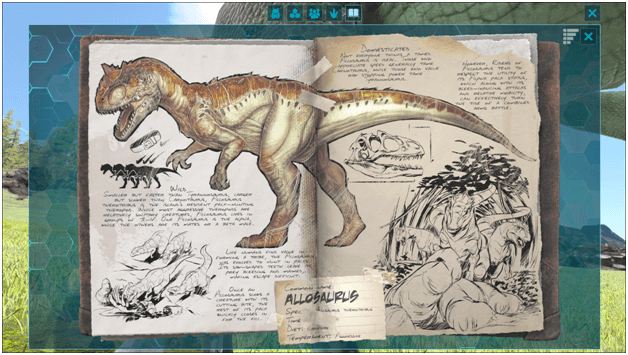 The Allosaurus has been considered as larger than a Carno but smaller than a Rex while possessing most of their positive traits with little flaws.

Allosaurus hunt well in a pack and can easily take down creatures, especially when the group work together as the alpha of the pack would maim their prey.

While an Allosaurus is already considered dangerous on its own, utilizing a group can easily change the outcome of a battle due to the efficiency of a pack fighting together. 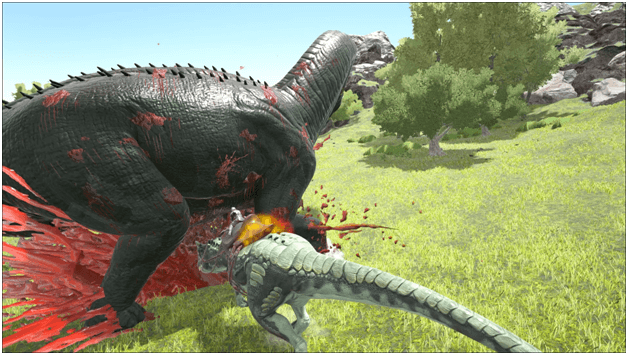 When in a group, the alpha gains the ability to use the Gore attack which causes enemies to be slowed and bleed out which causes them to take damage over time. 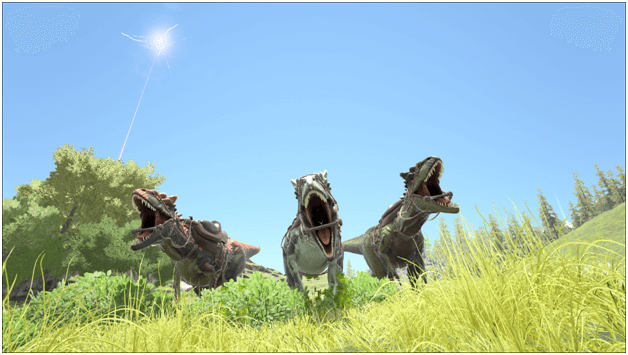 The Allosaurus alpha can roar which will cause its nearby pack members to do the same which can be a taunt to scare of other survivors. 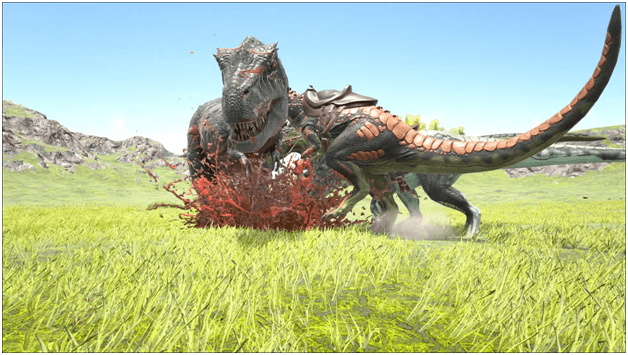 Allosaurus can fight as a pack and will gain an increased amount of damage per member that is nearby, allowing up to 3 Allosaurus to be a single pack.

Having more than 1 pack of Allosaurus will cause multiple alphas to be present, allowing other survivors to make use of the Gore ability.

Allosaurus can use the Gore ability to not only deal a large amount of damage over time but also to slow down enemies, making it hard for them to escape.

Allosaurus can deal a substantial amount of damage when fighting together and will last longer in combat due to the pack bonus from having multiple members nearby.

Along with the Gore attack that can cause bleeding, Allosaurus are capable of dealing a decent amount of damages to enemies with its normal attacks.

Allosaurus can be used to guard the inner walls of a base and will do well in killing any trespassers as well as making it hard for enemy creatures to escape.

How to Tame Allosaurus? 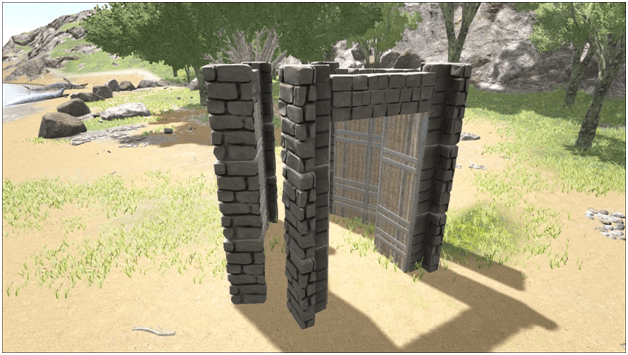 A good way to tame an Allosaurus is to use its size against it which can easily be done with a triangle gateway trap.

Create a triangle shape using gateways and place doors, leaving one open for the Allosaurus to enter. 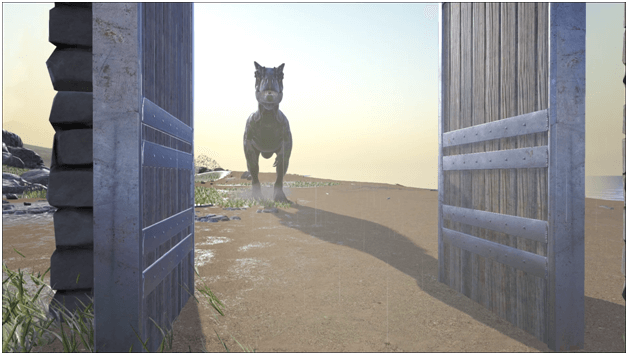 Lure the Allosaurus into the trap and walk straight through it to make it follow your trajectory as you quickly rush around to close the gate. 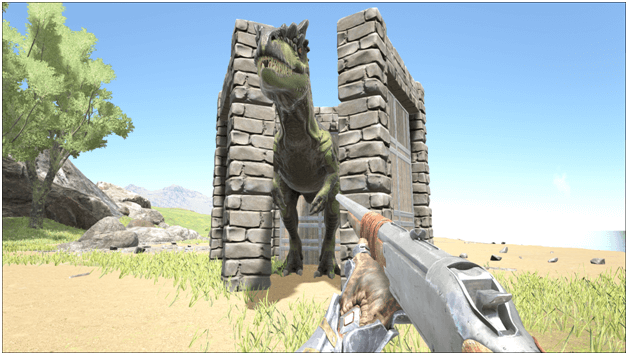 Once the Allosaurus is trapped, you and your tribe may safely knock it to easily tame it and make sure it cant escape. 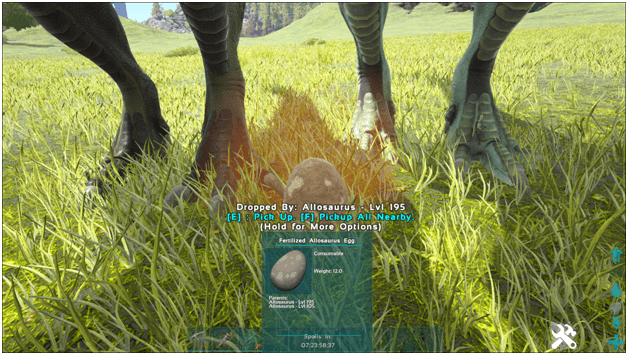 Allosaurus can breed, resulting in the female dropping a Fertilized Allosaurus Egg that is grey in color with lighter grey spots on it.

Allosaurus can usually be found in places where it can run around unobstructed such as plains and near the bases of mountains.

Maps where there are Allosaurus:

The following are spawn maps where the Allosaurus can be found 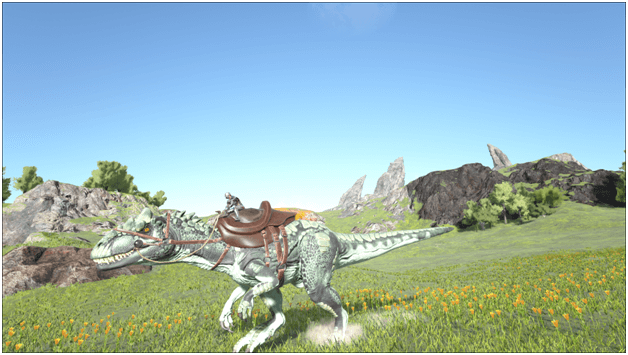 The sight of even seeing an Allosaurus on the chase is enough to scare most survivors and, in the event, that they are unable to outrun one, death surely follows.

An Allosaurus can deal a lot of damage when it is with other Allosaurus which makes them a good choice for taking down large enemies, especially with the Gore attack which maims the enemy.

While a group of Allosaurus can be hard to put together for some tribes, those who have accomplished such a task and even breed them are able dish out lots of damage to their enemies.