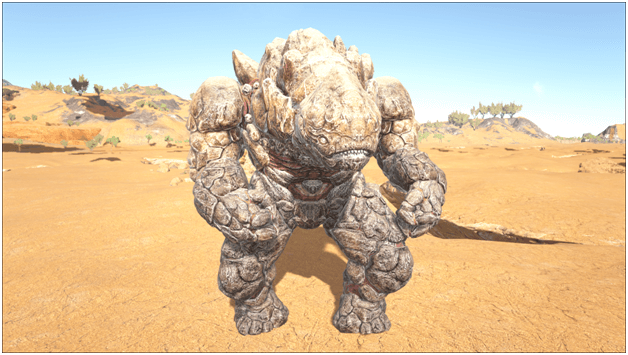 The Colossus Petram is a large stone creature from an unknown time period that feeds on minerals and has an extremely territorial temperament.

Unlike most creatures that have been found in the Ark, the Rock Elemental, also known as a Rock Golem remains a mystery to most but is said to cause destruction when survivors come across it.

Rock Elementals are usually hidden from plain sight, disguised as rocks while waiting for anything that invades its territory which it soon begins to attack.

Survivors as well as their tames may not be aware of the presence of the Rock Elemental but upon coming too close, they will be attacked instantly.

Those who have been able to tame a Rock Elemental gain the benefit of not only having a strong creature for fighting other tribes but also the means of defense when protecting bases as well as offense when raiding enemies. 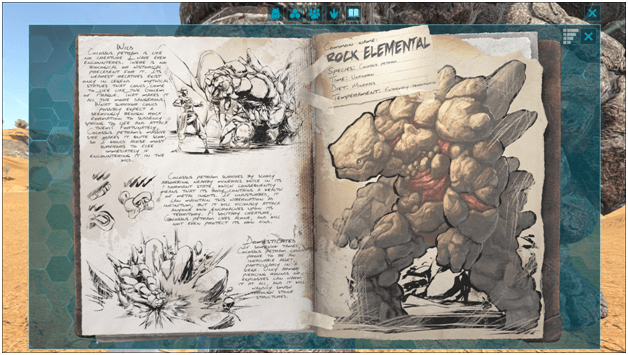 The biological origin of the Rock Elemental is unknown to everyone as there is no sign of reproduction occurring for the maintenance of this creature’s population.

Unlike most creatures that have carnivorous or herbivorous diets, the Rock Elemental gains nourishment by absorbing minerals to sustain itself.

In the event that a tribe is capable of taming a Rock Elemental, they may use it in sieges due to its ability to withstand damage and crush enemies with ease. 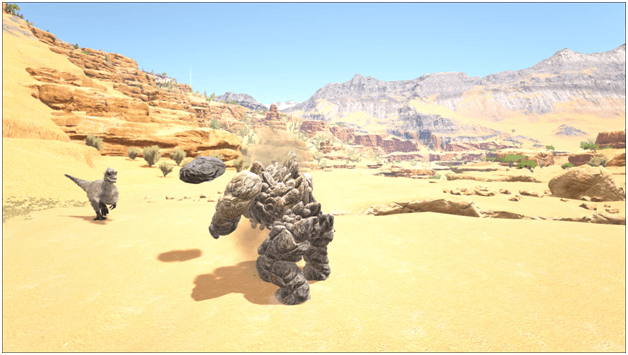 The Rock Elemental rips a boulder from under it and tosses it in a direction, damaging enemies that it collides with before shattering.

This ability can be used by the Rock Elemental if it is set to turret mode. 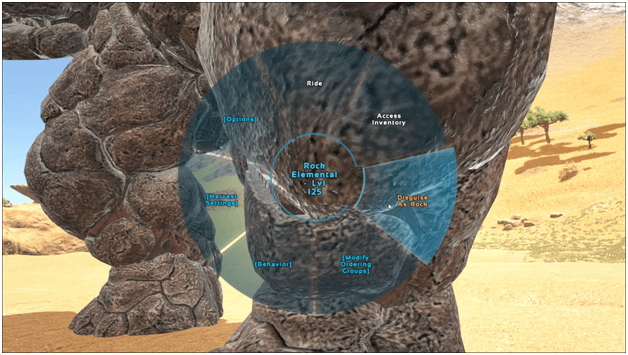 The Rock Golem may transform into a rock in order to disguise itself from sight, giving the chance for tribes to keep their possession of it to be discreet or to make  use of them in ambushes. 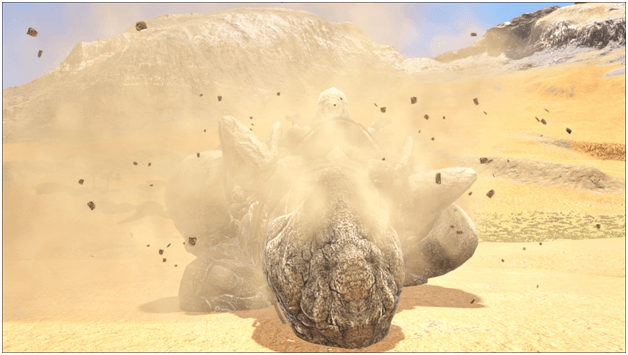 Transforming into a rock has no cooldown but it does have an animation duration which isn’t that long.

When a Rock Elemental has been set into rock form, anytime it attacks, responds to threats or is commanded to move will end up with it returning to rock formation afterwards. 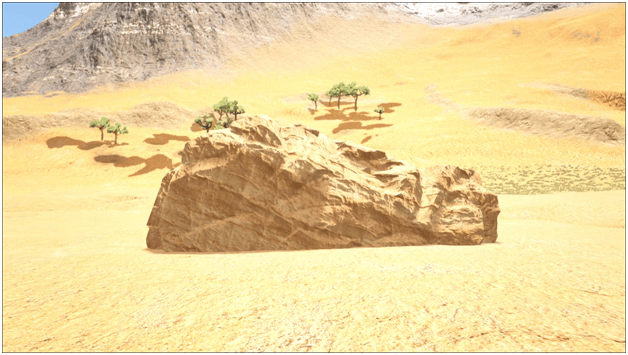 Rock Golems may still be attacked when in rock form but will defend themselves or anything else the tribe owns depending on its stance.

The Disguise As A Rock feature may be selected from the radial menu when interacting with the Rock Elemental.

Although mainly used for combat, the Rock Elemental is capable of harvesting resources from different sources such as bodes, trees and boulders or rocks

The Rock Golem can be used to defend tribes due to their durability and the damage they can deal, including massive damage from throwing boulders and the knockback dealt when it does melee attacks.

On its own, the Rock Golem already takes a 50% reduced damage from enemy creatures and can effectively stand in the frontlines during battles.

The Rock Elemental is naturally made from rock and with the addition of a saddle, it can easily soak enemy turrets.

When a survivor is mounted, moving the Rock Elemental towards an enemy base while walking backwards allows the survivor to remain safe from harm, even from turrets set to only target survivors.

This creature is very strong and can flatten enemies easily with its attacks and devastating boulder toss, making it a good all around fighter alongside other creatures.

Strangely this creature does not require any oxygen and can freely walk the bottom of the ocean, assaulting underwater creatures and assisting for the raiding of bases built in the water.

It is possible to set the Rock Elemental in turret mode so that it will defend its position by throwing boulders at enemies that come within range.

How to Tame Rock Elemental? 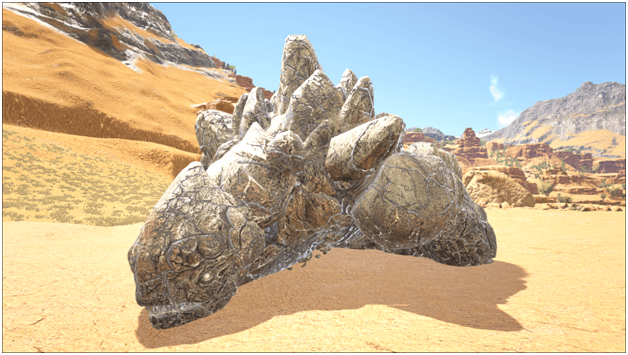 The Rock Elemental is not knocked out as easily as other creatures and can only be knocked out with headshots from projectiles such as rockets and cannonballs.

Do to the fact that it requires headshots to be knocked out, you will need to find a way to safely target its head which leads us to suggest making a trap for it.

Be sure to only hit its head or you will deal excessive damage, eventually leading to its death instead of it getting knocked out. 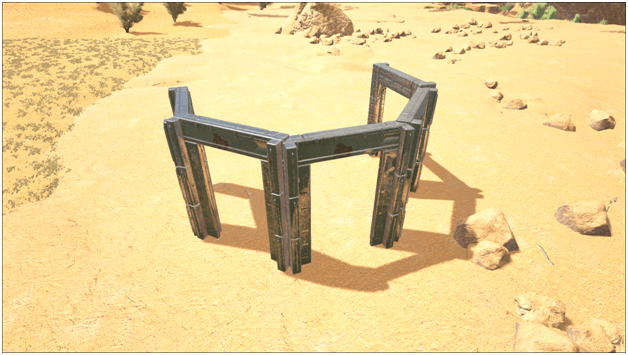 The Gateway Trap for Rock Elementals is made by creating half of a cage where the gateways are connected by snapping them to each other.

In order to trap the Rock Elemental you simply need to lead it through to the gates and head to the center acros sit where you should have a cannon set up. 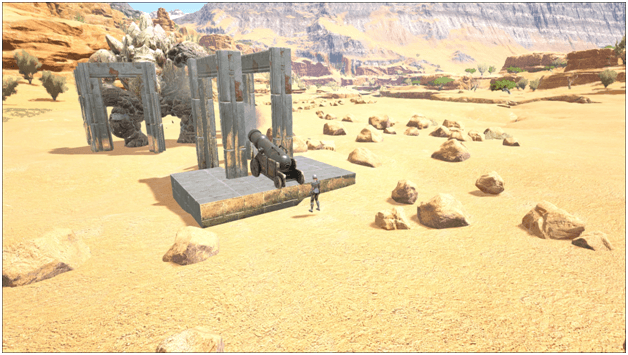 Be sure to put up structures such as pillars and ceilings or more gateways to block boulders that may be tossed by the golem.

The Rock Elemental will attempt to chase after you and will continue to walk, thinking it can get through the gateway.

Be sure not to have any wild creatures at the sides and make sure no one goes around it to even close the trap as this will get its attention and cause it to leave the trap. 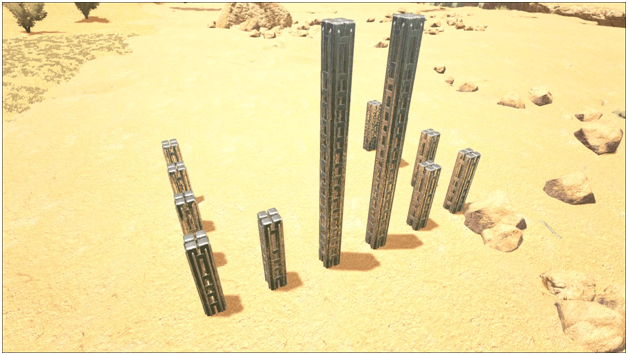 The Pillar Trap may be a bit harder to set up if you do not have the means for making it but it makes taming the Rock Elemental much easier. 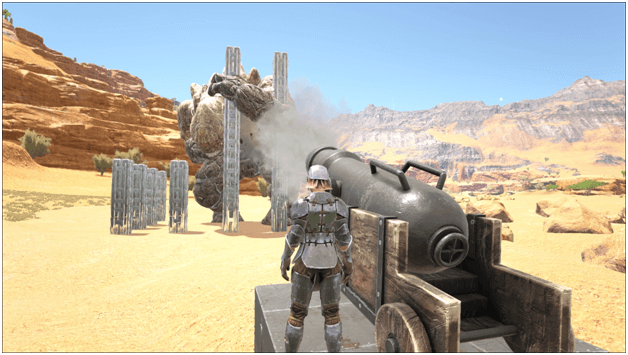 Simply set pillars up following a 4x6x4 setup where the 2 middle pillars between the longer side has pillars extending to block the golems bolder.

This will create sufficient space and make shooting the golem easier to knock out as it will attempt to attack you with boulders instead of trying to move to you.

Rock Elementals cannot be bred but they may be cloned using Tek Cloning Chambers. 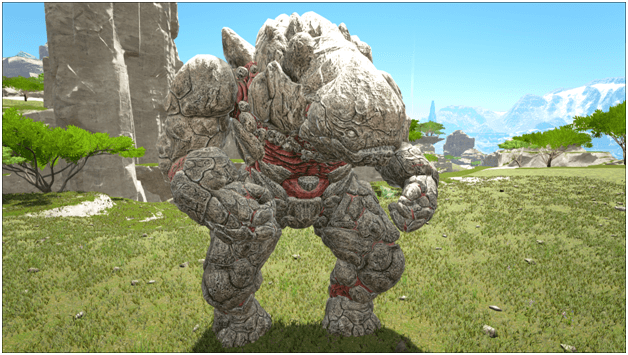 The Chalk Golem may be found in the Valguero map. 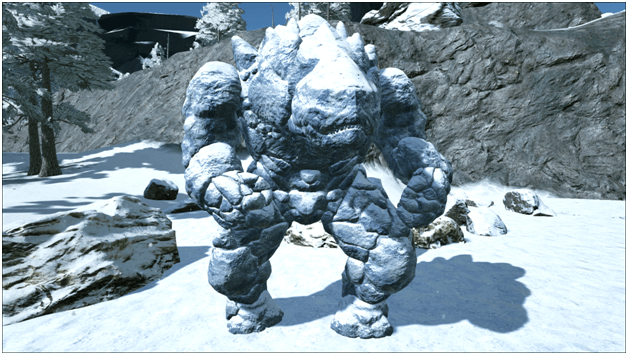 The Ice Golem may be found in the Valguero map.

Rock Elementals can usually be found in desert areas where there are usually rocks similar to its appearance.

Maps where the Rock Elemental spawns: 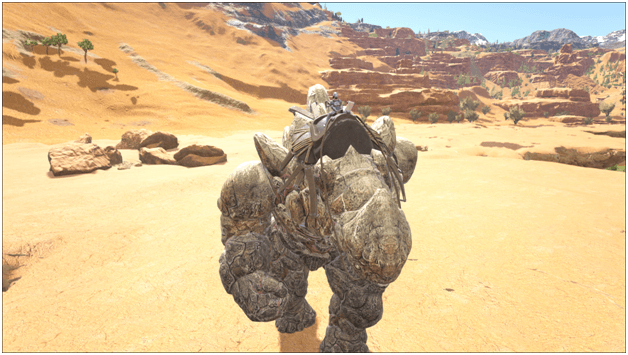 While Rock Elementals do pose a threat to anyone who comes near them, the risks taken when taming them are worth it as they become very essential for raids.

One of the most popular uses for a Rock Elemental is for draining turrets as its skin alone is hard to damage while saddles make it extra tough and as a bonus the rider can be targeted but not hit, allowing the Rock Elemental to drain turrets set on survivors only.

While the Rock Golem is mainly used for raiding, it does well during fights and with defending bases as it can deal a large amount of damage with boulders and knock enemies away.