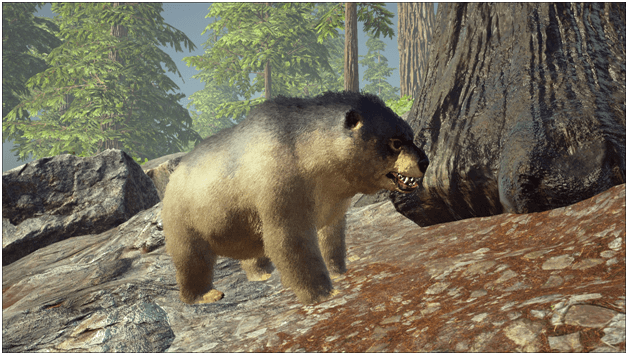 Arctodus Dirus is a territorial omnivore that existed in the mid Pleistocene to early Holocene Epoch.

A DIre Bear can easily be described as a massive bear about twice the size of modern forest bears.

Much like their modern brethren, Dire Bears are territorial and also aggressive when hunting but when observed from afar, they can occasionally be seen looking for honey and berries.

Being territorial creatures, Dire Bears will attack humans that come too close to their territory which means it would be best to not approach the Dire Bear.

Taming a powerful Dire Bear gives any tribe an advantage in a battle as they can do a lot of damage and when used to harvest, they can easily gather honey from beehives. 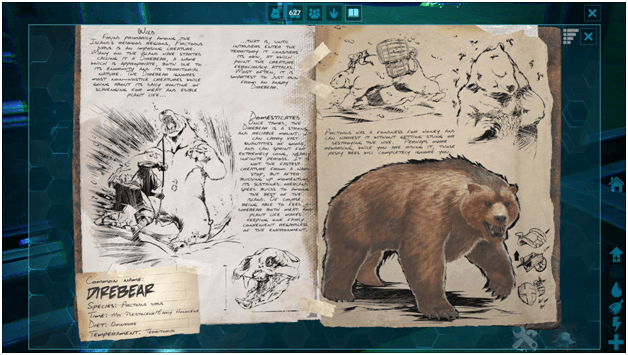 Dire Bears are common residents of the redwood forest where it can easily find honey and has large space to roam with little obstructions.

Even though it is territorial, the Dire Bear has also been observed to only attack other creatures when hungry or threatened.

Once domesticated the Dire Bear can easily protect its tribe from land creatures and also carry heavy loads for expeditions to different parts of the island.

Some tribes have used the Dire Bear’s natural ability to gather large amounts of honey safely without destroying the bee hives. 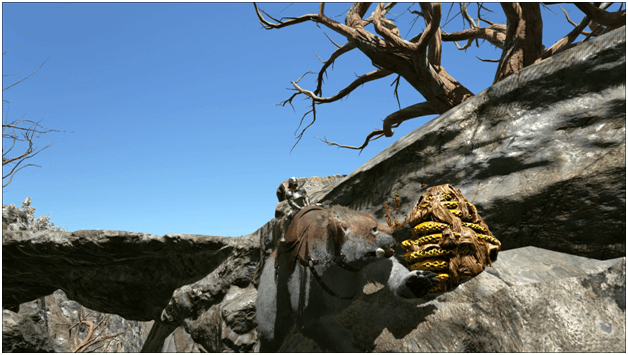 The Dire Bear can gather larger quantities of honey from beehives that are found around the island while remaining unharmed.

When harvesting from beehives, the survivor and the Dire Bear are both safe from being attacked by bees.

Able to protect anything in close proximity to it from the elements the Dire Bear provides a 35 bonus to Hypothermic and Hyperthermic protection.

Dire Bears are fast on land and can travel across long distances while keeping its rider safe and carry items in its inventory.

The Dire Bear can gather different types of resources such as Fiber, Berries ,Meat ,Chitin and Honey due to its large carry weight so It can gather a lot of these materials before needing to unload its cargo.

Dire Bear attacks have a wide reach that can hit creatures surrounding it and while chasing down enemies, it can attack and run at the same time without losing speed.

This creature can safely gather honey in large amounts which can be essential for tribes that need such a resource.

Since its damage output is larger than other creatures, the Dire Bear is considered to be a good damage dealer.

How to Tame Dire Bear? 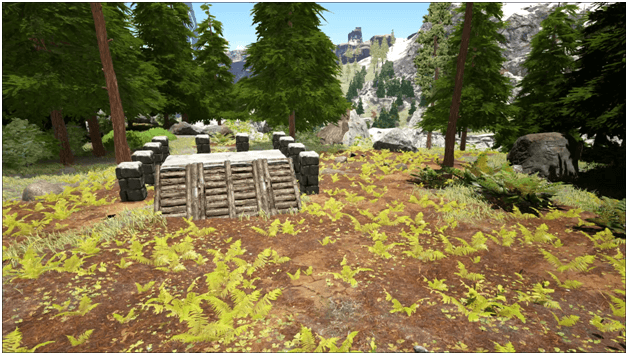 You can easily build a 4×4 stone pillar trap with ceilings and ramps at the side for the Dire Bear using pillars made of stone as it is the cheapest resource that can’t be damaged by wild creatures. 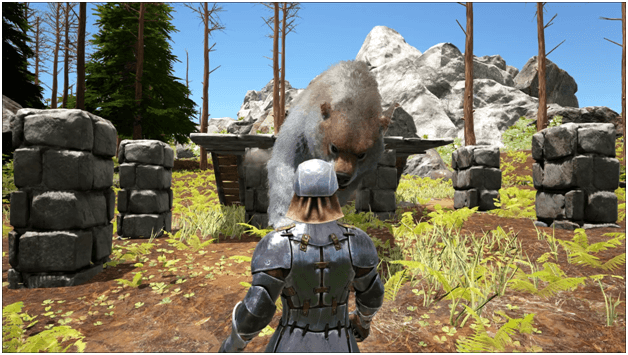 Once your trap has been created, lure the bear by walking near it or damaging it and have it follow you as you walk across the ramps, causing it to follow and end up inside the trap. 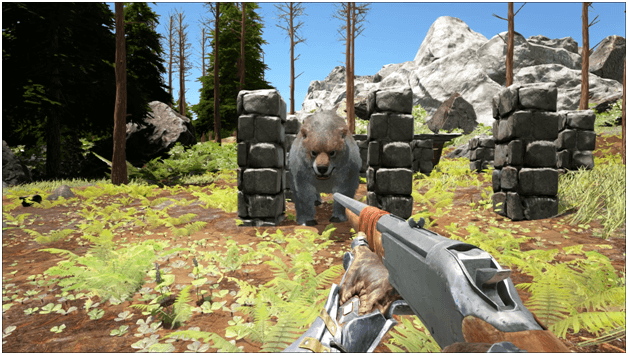 You and your tribe may begin to knock the Dire Bear out once it is trapped and tame it afterwards. 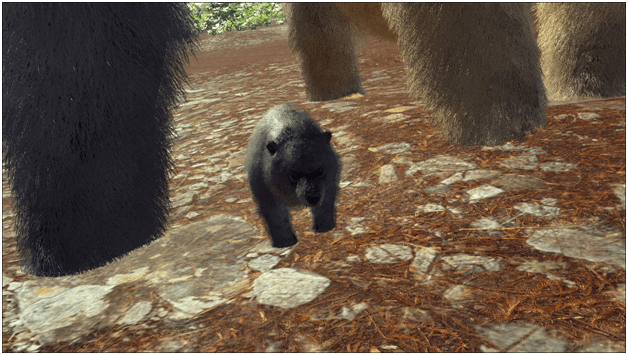 After the male and female Dire Bear mate, the female will carry a baby Dire Bear until it is time to give birth to it. 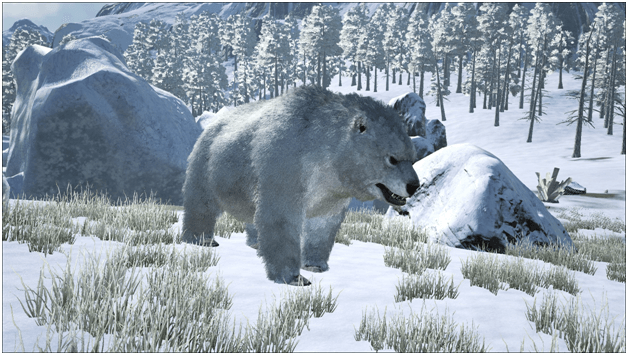 DIre Polar Bear has a chance to spawn as a replacement for other Dire Bear. Dire Polar Bear can be found on the snow covered areas of the map instead of Dire Bears. 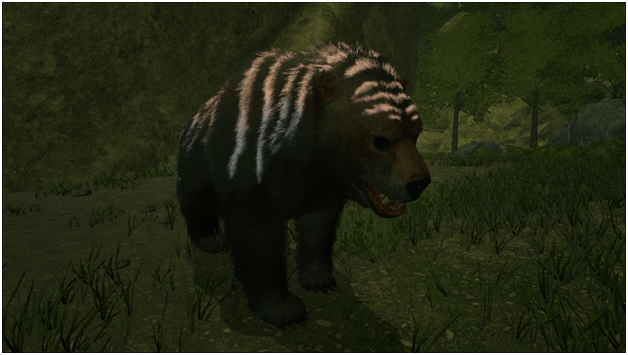 Aberrant Dire Bears spawn in the Aberration and Valguero maps.

Dire Bear are usually found in the redwood forest or jungles with a lot of trees covering the area.

Maps where there are Dire Bear: 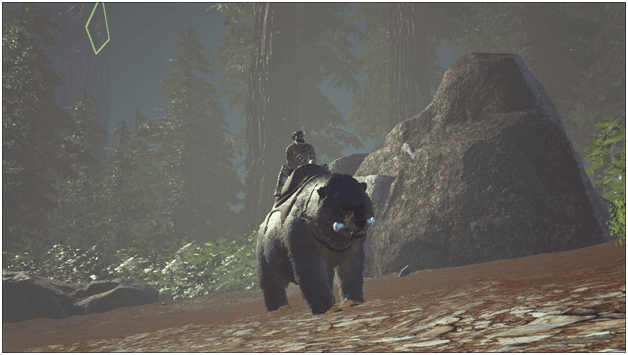 Dire Bears are powerful land creatures due to their considerable strength, speed and endurance, making it capable of toughing it out in almost any condition whether facing an attacking raiding party or as part of one on the hunt.

Common for tribes that take no prisoners, Dire Bears are usually in the hands of a bloodthirsty rider that uses the Dire Bear to chase down escaping creatures or survivors and rip them apart.

These creatures are a terrifying sight that can only be described as being chased down by a massive ball of fur with sharp claws and gnashing teeth.