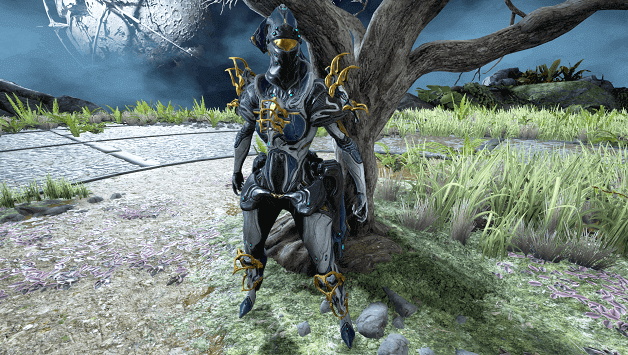 Protea  is a vigilant protector who makes use of gadgets and tactics to take on the enemies that seek to attack her and her allies.

Using an arsenal of gadgets, Protea can destroy her enemies by blowing them up with grenades or setting up artillery units.

Excellent in both offense and defense, Protea is capable of ensuring that her allies are well supplied and may even turn back time to replenish her own needs or even escape death.

How To Get Protea? 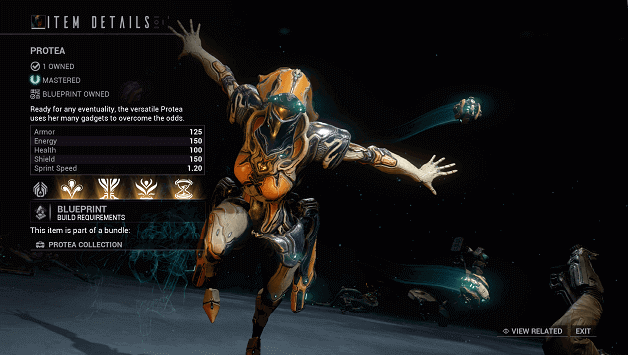 Protea can be purchased fully built for 325 Platinum or she may be obtained by completing The Deadlock Protocol and having her parts farmed in the Granum Void.

To know more about how to get platinum in Warframe check our guide. We have listed out all the possible ways to earn the platinum for free & other ways.

How To Get Protea Blueprint?

You can obtain Protea’s Blueprint after finishing The Deadlock Protocol quest, which rewards it after its completion.

The Deadlock Protocol involves the discovery of the Corpus Parvos Granum still alive after Protea had given her life to preserve him in an interdimensional realm.

During the quest, you will learn about Granum Voids and this is important later when it comes to how to farm Protea parts.

How To Get Protea Parts?

Protea’s Components can be obtained by entering and completing Granum Voids but each part has its difficulty required.

Protea Systems is the hardest to obtain and requires that you use a Zenith Granum Crown when doing a Granum Void.

Each Granum Void difficulty has an 11.11% chance to reward you with one of Protea’s parts.

The Protea farm locations that have Granum Voids are on Corpus Ship Tilesets.

After getting Protea, you may be wondering about it’s builds. In this Protea build guide, we’ve covered some of the effective builds. Do read our guide. 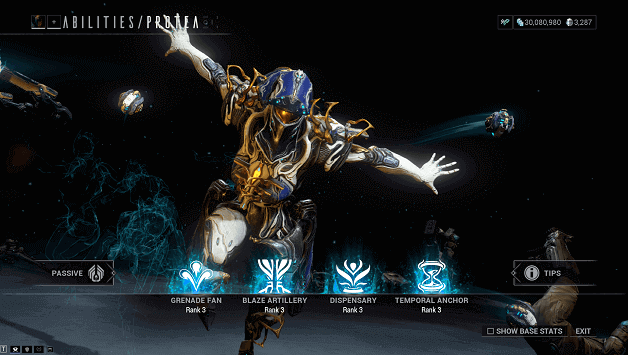 Protea is capable of dealing intense amounts of damage to enemies with her grenades or artillery units that she can deploy.

She is capable of ensuring the safety of her allies as well as making sure they can replenish their needs from time to time.

When the time calls for it, Protea can bend the very fabric of time and return to a previous state after leaving behind a Temporal Anchor.

Whenever Protea has cast 3 abilities, her next ability cast will have bonus Ability Strength, which is reset upon casting a 4th ability, and the cycle repeats. 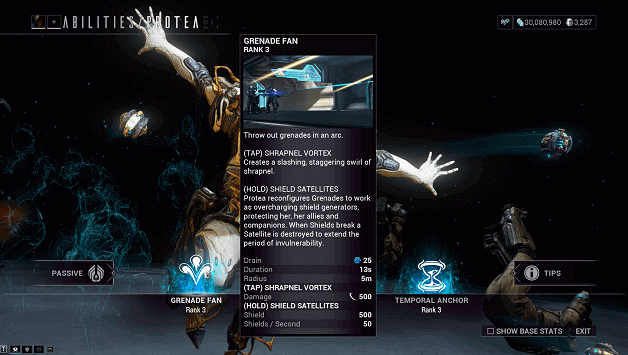 When the Grenade Fan ability is cast, Protea will throw out grenades in an arc in front of her, which will create a slashing vortex that staggers enemies.

An alternate cast with this ability by holding it down will release Shield Satellites instead, which protect Protea and her allies with overshields. (Satellites are destroyed when shields break)

This ability allows Protea to act offensively or defensively to damage enemies and pull them together or to restore ally shields to help them survive. 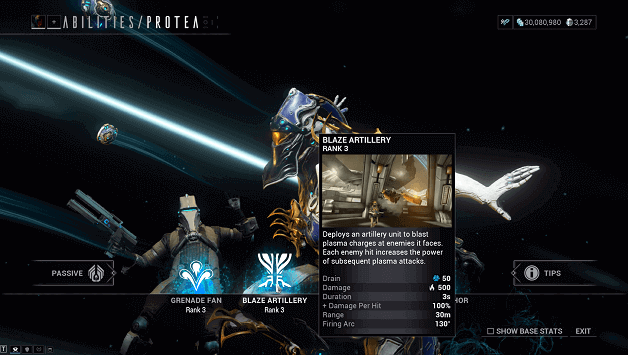 Protea deploys an artillery unit that fires plasma charges at enemies within its line of sight, dealing high amounts of heat damage.

The damage from the artillery unit increases for each enemy that is hit, making multiple shots deal more damage than the previous ones.

Blaze Artillery is great for holding off a spot or defending targets from enemies and to make things better, Protea can summon multiple units.

Each Artillery Unit deployed will have its duration, which can be increased by adding Ability Duration to your builds. 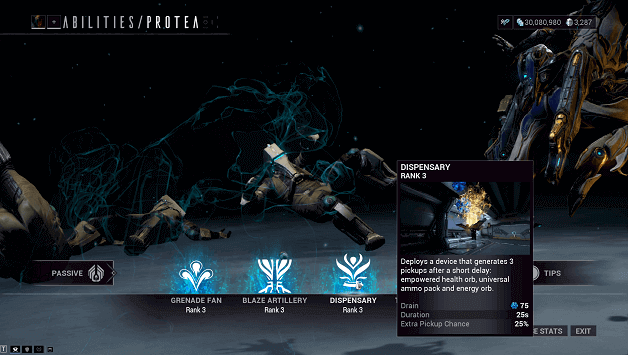 Protea deploys a device that will release 3 pickups after a short delay, which can be either empowered health orbs, universal ammunition, or energy orbs.

The pickups are chosen at random and there is a chance for an extra pickup to be released, which is based on Ability Strength.

A small cost of energy is needed to release this gadget and the exchange for multiple pickups will come in handy for you and your allies.

Augment Mod: Repair Dispensary allows you to use an alternate cast by holding this ability which will revive a Sentinel or Companion Moa of a player within 14 meters every 60 seconds.

Repair Dispensary is currently the only option for Protea Augment Mods. 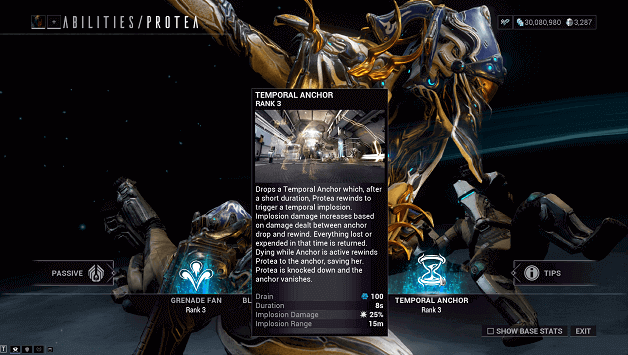 Upon casting this ability, Protea drops a Temporal Anchor, which allows her to rewind and trigger a temporal implosion.

The Implosion damages enemies in an area based on how much damage has been done between the time the Temporal Anchor was dropped until implosion.

Anything lost or used during the effects of Temporal Anchor will cause them to be replenished after the implosion and dying after dropping one will rewind and save Protea.

Temporal Implosion is great for dealing massive amounts of damage with no costs to Protea and it may come to save Protea from death in certain situations. 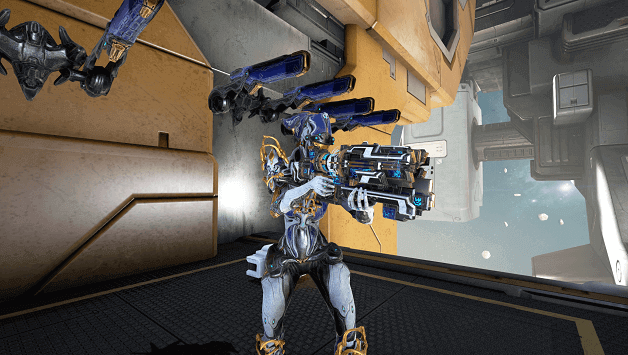 Protea is excellent when it comes to all kinds of missions due to the many gadgets that she possesses in her arsenal.

Setting up multiple Artillery Units is capable with the right modding and her Grenade Fan ability can deal a lot of damage or provide high amounts of shields.

You can be a bit reckless with Protea and get away with it since Temporal Anchor can often save her life and increase the amount of damage you can do with its implosion.

Overall Protea can do a lot with the unique abilities she has and even better when these are strategically used in battle.