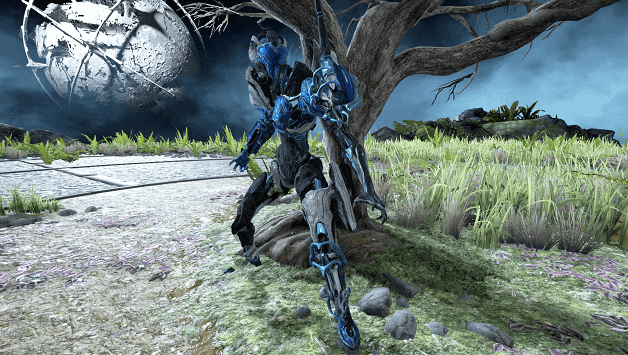 A stranger Warframe than most you would find, being what appears to be built from the remains of others lost in the past, Xaku lives again to wreak destruction upon its foes.

What is left of this Warframe from the early Entradi Void expeditions has caught and mastered the power of the Void which it now uses to terrify enemies.

Xaku is capable of harnessing the power of the Void to empower himself and to cause mayhem to all those who stand in its path.

How to Get Xaku? 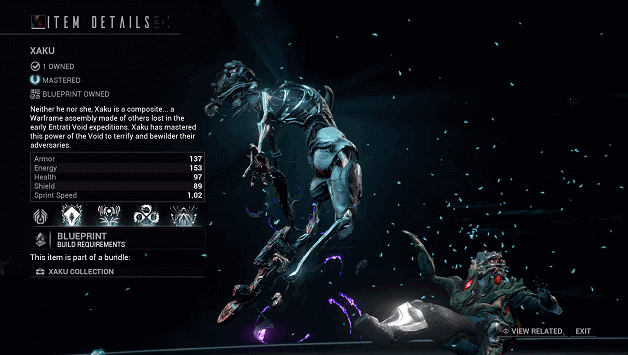 The main blueprint for Xaku is rewarded after you have completed the Heart of Deimos quest and its components are obtainable from bounties in the Cambion Drift.

Xaku can instead be purchased from the market on your orbiter to get the Warframe fully built, which costs 325 Platinum.

To know more about how to earn platinum check our guide https://progametalk.com/warframe/how-to-earn-platinum/. We have listed out all the possible ways to earn the platinum for free & other ways.

How To Get Xaku Blueprint?

Completing the Heart of Deimos quest will reward you with Xaku’s main blueprint, leaving you with the need to obtain its components to complete it.

If you need to get Xaku’s main blueprint again, it will be available from Cephalon Simaris for 50,000 Standing.

How To Get Xaku Parts?

Xaku’s parts can be obtained by doing bounties in the Cambion Drift, which you can get within the Necralisk or in the open world.

When accepting a bounty, you will be able to see which parts will be rewarded and can check the table to make sure you get a chance to get the parts you need.

You will need the Xaku Neuroptics, Chassis and Systems in order to complete building the Warframe, along with the main blueprint.

After getting Xaku, you may be wondering about it’s builds. In this Xaku build guide, we’ve covered some of the effective builds. Do read our guide. 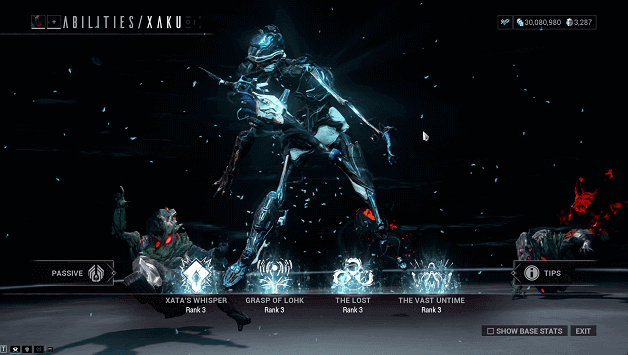 Having mastered its control of the Void, Xaku is capable of using it at will, even being able to amplify its regular weapons with its power.

Xaku can steal the weapons and turn them against its enemies causing more damage when facing several foes.

Void power allows Xaku to use lost Warframe powers, converting enemies into allies, trapping foes to take damage over time, and even unleashing a beam of destruction.

When the situation calls for it, Xaku can shed its outer pieces to create a destructive blast as it finishes off the remaining enemies.

Xaku has a 25% chance to phase through incoming weapon damage from enemies and is protected by a 25% reduction against area of effect damage.

The chance to dodge an area of effect damage reduction is increased to 75% when Xaku has The Vast Untime activated. 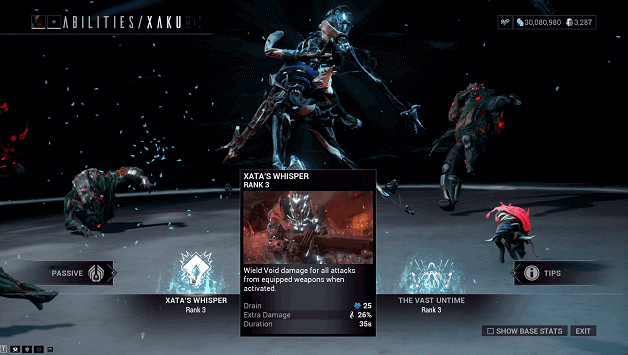 Xaku imbues its weapons with Void damage, adding extra damage to its attacks for a certain amount of time.

The extra damage is counted as an extra hit and is based on the total weapon damage of the weapon that you are using.

This is a good way to deal extra damage and can also cause the Bullet Attract status effect to occur based on the Status Chance of your weapon.

The Bullet Attract status effect creates a 5-meter field that forms where your target was hit, causing projectiles to hit the target within the field for a short amount of time. 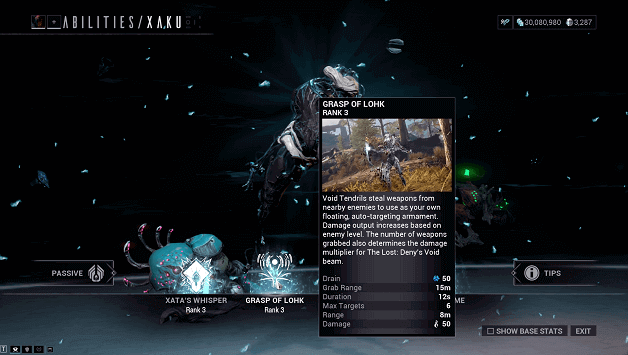 Xaku summons Void Tendrils to steal the weapons from nearby enemies and uses them to shoot those who are near him.

This removes weapons from enemies and makes copies that float around Xaku, shooting at any enemies within range and dealing more damage.

Using Grasp of Lohk forces affected enemies to use melee weapons and uses the stolen weapons against your foes.

Augment Mod: Vampiric Grasp causes Xaku to be healed when a weapon damages an enemy that is affected by The Lost: Gaze or by The Vast Untime. 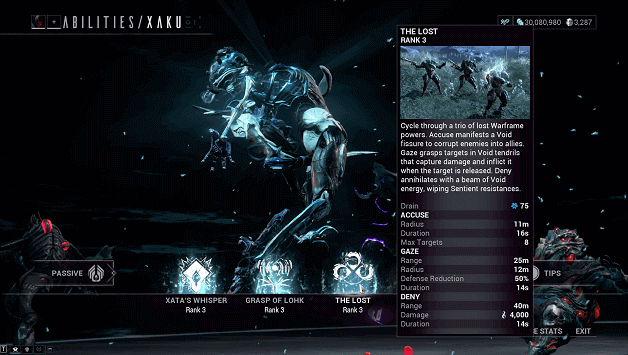 The Lost allows you to choose between 3 different abilities which are Accuse, Gaze, and Deny, which each have their effects.

Accuse creates Void fissures which corrupt your enemies and convert them into allies who will fight for you for some time.

Gaze takes hold of your enemies using Void tendrils, ensnaring them while also creating an aura that weakens enemy shields and armor.

Damage done to enemies affected by Gaze will be received once the ability is done.

Enemies that survive the Void beam are suspended in the air for a certain amount of time.

Augment Mod: The Restless Lost increases the Ability Strength for The Lost by 35%, which stacks up to 3x only to be reset when the same ability is cast twice. 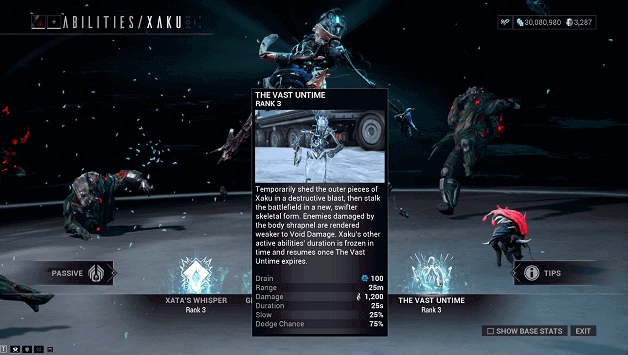 Xaku sheds its outer pieces, creating a destructive blast in an area around him as it continues in its faster skeletal form, providing him with a high chance to dodge.

During this time Xaku will also gain resistance against area of effect damage and will cause enemies around him to become slowed.

Enemies affected by the blast will become weaker to Void damage and Xaku’s other abilities will have their duration frozen until The Vast Untime ends. 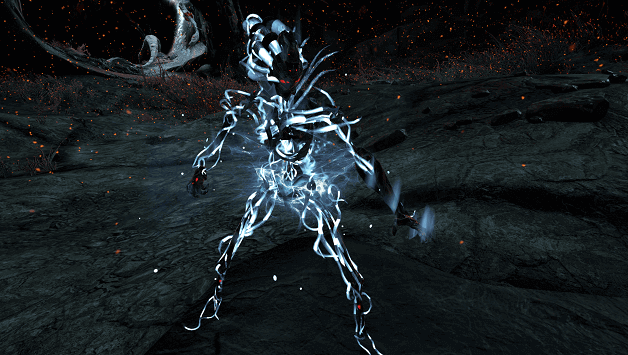 Xaku is great at taking weapons from several enemies and turning them to its side, great for clearing out the enemies and later focusing the rest of the fire on stronger ones.

Its abilities can be used together which can combine to create several strategies such as slowing enemies with The Vast Untime, taking their weapons with Grasp of Lohk.

The ability to create additional Void Damage gives Xaku quite an advantage over enemies as well as a good amount of additional damage for its main weapons.