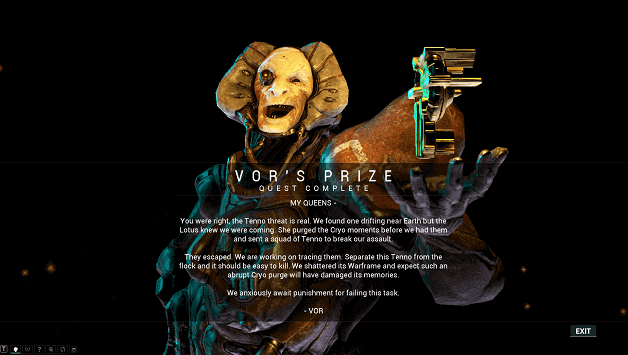 Vor’s Prize is the second quest that acts as another introductory quest for new players as they will need to start repairing their ship, also known as an Orbiter.

During the quest, Cephalon Ordis introduces itself and begins guiding the Tenno so they understand which steps they need to do to repair their Orbiter.

It is discovered that an Ascaris device has been implanted into your Warframe and you will need to disable it before it completely burrows in and takes total control over you.

How To Get Vor’s Prize Quest?

You will obtain the Vor’s Prize quest once you have completed the Awakening quest, which is the first quest and your introduction to Warframe.

After completing the Awakening you will have escaped on a damaged ship later on known as an Orbiter, which unlocks Vor’s Prize. 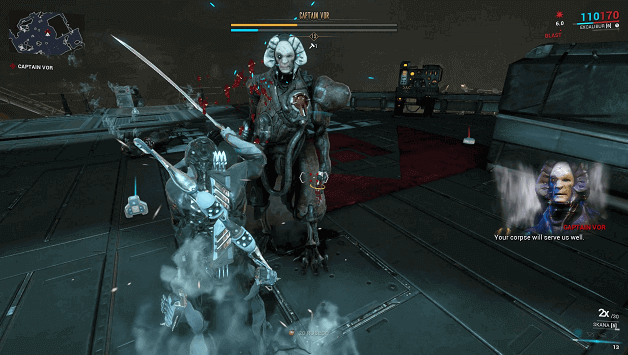 After completion of the Awakening, you (the Tenno) will find yourself aboard your Orbiter where Ordis, the ship’s Cephalon, will welcome you back and introduce itself.

Ordis, although happy to see you back, will dramatically state that it is a shadow of its former self and cannot serve you in such a condition, offering to self-destruct if you wish it.

The Lotus cuts in talking about the Grineer and their thirst for technology and prompts you to check for systems left in your Orbiter’s compartment.

At this time you will be infected by Vor’s Ascaris which is slowly taking control over your Warframe, requiring that you figure out how to get rid of it.

As you look around in your ship it will be confirmed that the ship was looted but Ordis will prompt you to reactivate the ship’s arsenals, which sadly has also been looted. (Unlocks Arsenal).

You will then be given the task to restore the ship’s comms by heading to Earth to obtain a communications segment for your ship.

The mission on Earth is a Grineer Spy mission which has only one vault, requiring that you sneak past or fight your way past enemies and extract the segment from a Grineer Vault.

Once back in your Orbiter, you will need to install the comms segment which will be at a marked location, which unlocks the Codex on your ship.

Lotus requires that you install the segment as soon as possible to analyze what Vor’s Ascaris is doing to your Warframe, realizing that it is of Corpus origin which requires investigating.

A Corpus defector named Darvo has been imprisoned on Grineer Gulag, which you will need to rescue as payment for his help in removing Vor’s Ascaris from your Warframe.

Your next mission will be a Grineer Rescue mission and you will need to make your way to the holding area and either sneak or rush your way in to break Darvo out before time is up.

After rescuing Darvo and extracting you will be back on your ship and will be able to install the mod segment, allowing you to equip your Warframe with mods. (Unlocks Mods)

Darvo will recognize the device and explain what it is, while also giving you a blueprint to craft the Ascaris Negator, a countermeasure device for Vor’s Ascaris.

In order to build the Ascaris Negator, you will first need to restore the ship’s foundry and the Lotus explains an extraction colony nearby can give you one.

The colony will be unresponsive and you will need to find the Foundry Segment within the facility which is now under the control of the Grineer.

Once back on your Orbiter with the Foundry Segment, install it in the marked location so you will be able to craft the Ascaris Negator. (Unlocks Foundry)

Ordis will explain that the Foundry is where the Tenno will be able to crafty many powerful weapons and tools but realizes that the components have also been looted.

Darvo will contact you and give you information about where you can obtain those resources, while also demanding an apology for insults from Ordis.

At the beginning of the mission, you will need to head over to each of the marked caches and open them before extracting, providing you with the resources you need.

Upon returning to your Orbiter, you will be able to craft the Ascaris Negator and once you do so, your Warframe will begin to remove Vor’s Ascaris device.

Surprisingly, the Ascaris has already burrowed deep into your Warframe, which now requires you to locate Vor in order to get to the detonator to disarm it.

The next mission will be on a Grineer ship and you will need to locate the Nav Segment which is marked by a waypoint which you must head to and obtain.

You will need to hack a console to open up the Nav Segment container and as you extract you will have the option of escaping or saving a convoy of colonists the Grineer are heading to.

It is finally time for a faceoff with Captain Vor, who holds the detonation device for the Ascaris that is causing your Warframe problems.

This will be a Grineer Assassination mission where you will fight your way past Grineer troops as you head towards Captain Vor’s location.

You will need to fight Captain Vor, dealing damage to him and waiting for his barrier to go down, which needs to be repeated before he is killed.

Back on your Orbiter the Lotus will debrief you and explain that there is more to do in the system, which also ends the quest after you read her message.

For a guide on how to defeat Captain Vor in this mission, check out our Guide on Defeating Captain Vor. 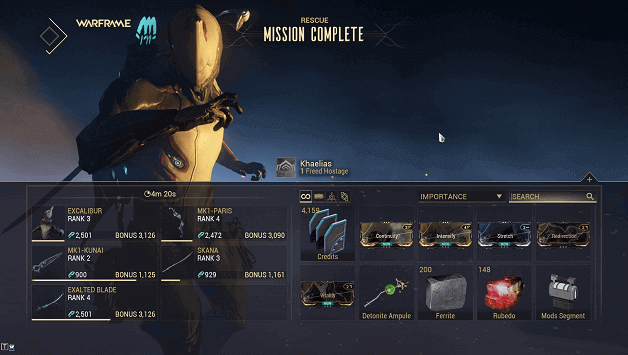 There are multiple instances where you receive rewards during the Vor’s Prize quest, which mostly consists of mods.

The following are all mods rewarded upon completing each of the missions:

The New War was one of the most anticipated updates in Warframe history and rewards the players with a lot once they finish it.

To get Caliban and other equipment from The New War update, you will need to complete this quest first and at the end, you also get the equipment from within the quest.

Some elements from The New War will permanently affect your game, mainly the Lotus’ permanent form.