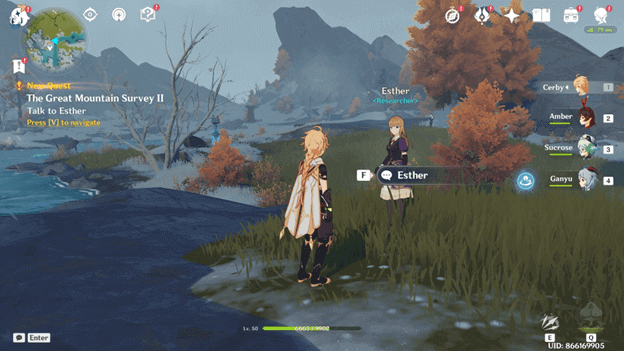 You previously helped Esther set up beacons and this seems to not have been as accurate and she mentions that it is not good enough.

Once again, Esther requires your help with her mountain surveying to properly complete her tests with the beacons.

This time, she will need you to head to the highest peak in Dragonspine to place one more beacon for proper altitude adjustment.

How To Get The Great Mountain Survey 2 Quest? 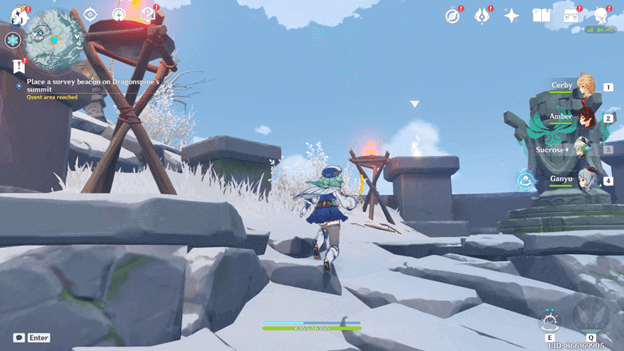 Speaking with Esther will start this quest and after she has explained the task at hand during a dialogue with her, the quest will begin.

She mentions that she needs one beacon placed at the top of the highest peak in Dragonspine, which is quite a challenge due to the cold and the need for climbing.

2) Place Beacon at The Very Top of Dragonspine Mountain

The location where the beacon needs to be placed will be marked on your map after you have spoken with Esther.

If you have recently done In The Mountains quest, this area should be familiar and you can simply use a Teleport Waypoint to get closer.

For those who have not completed In the Mountains quest, the path that goes within the mountain will still be blocked by a wind current, requiring that you climb your way there.

Climbing may take a lot of time and the risk of characters dying from the cold is likely, but this is still a doable task.

If you prefer to have an easier way to complete the quest, it is suggested that you complete In The Mountains quest first from Iris at the Dragonspine Adventure Camp.

Once you set out to place the beacon, simply climb your way to the highest part of the mountain and head towards the spot.

Investigate the marked spot and this will allow you to place the beacon before you head back to Esther to report your success. 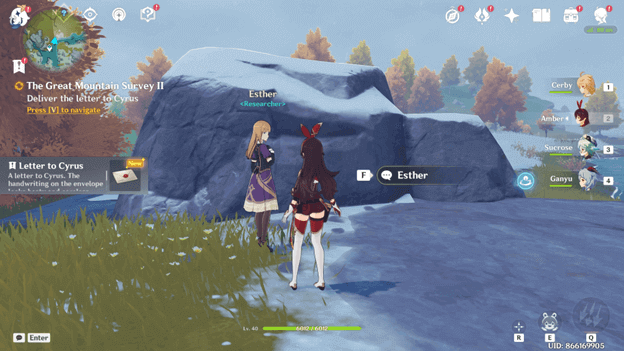 3) Report Back to Esther

Once you have placed the beacon, you can teleport back to Esther via the Teleport Waypoint near her area and speak with her.

She will hand over a letter that you will need to give to Cyrus regarding your compensation, which she asked Cyrus to handle.

4) Deliver The Letter to Cyrus

After receiving the letter, you may head back to Mondstadt City and speak to Cyrus to give him the letter you got from Esther.

Cyrus will have already prepared the reward for you, and you will receive it after the dialogue with him, ending the quest.

After you have completed The Great Mountain Survey 2 quest, you will receive Adventure EXP and Mora as well as additional rewards. 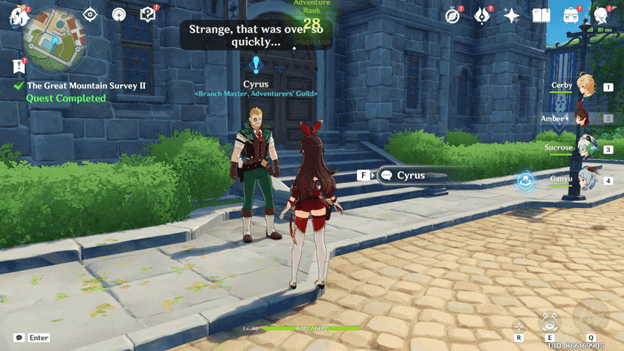 It turns out that Esther was right about the beacons you placed during a previous quest and this time you were asked to place one in an even harder-to-reach area.

Luckily, you were able to complete this successfully which will now help Esther with her mountain surveying.

While this has been a doable task for you, Esther and Cyrus do mention that no others are willing to carry out such dangerous tasks.