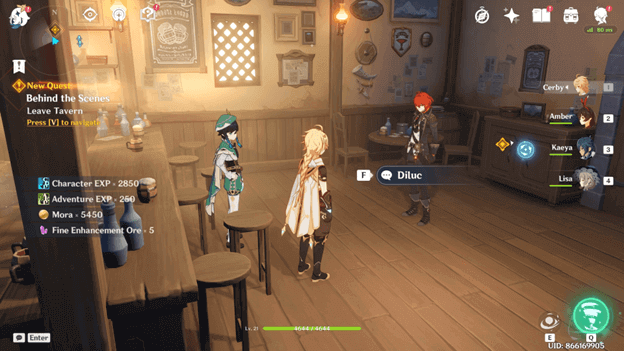 After previously escaping the guards who chased after you during the Wild Escape quest, Diluc has agreed to help you and Venti.

Since Diluc is a busy person and needs to get in touch with some contacts, you will need to meet him later on during the night.

While Diluc has not mentioned who he contacted, you will discover later on who he trusts with the upcoming tasks that lie ahead.

How To Get Behind the Scenes Quest?

Behind the Scenes quest starts after you have finished speaking with Diluc during the Wild Escape quest, where you have successfully hidden from the guards.

It was to your surprise that he did not rat you out when you went into his tavern to hide as well as the fact that he even agreed to help you out even further.

Behind the Scenes Quest Objectives 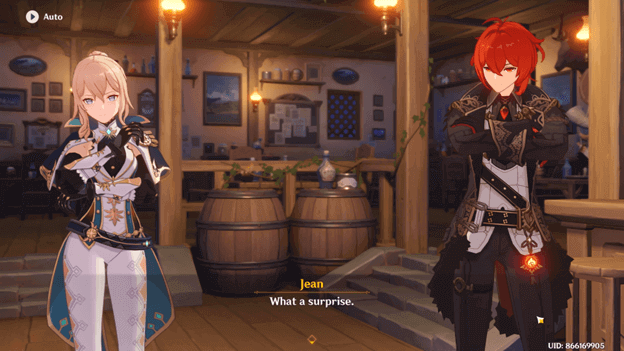 Once the quest begins, you will still be in the tavern and will have to leave before you can continue proceeding to the next step.

Since Diluc has told you that he needs more time to figure out who he will contact, you will need to wait (advance time) to give him the time he needs.

You can advance the time by entering the Paimon Menu and forward the current time until it is anywhere between midnight to 6 in the morning.

3) Go Back to the Tavern

After the current time has reached between 00:00 – 06:00, you will need to go back inside the tavern to find Diluc.

By now, Diluc will already have contacted multiple people and you will find out who he has summoned to aid you with your task.

A cutscene will play once you enter the tavern and later you will find out that Jean is the one who has arrived and she will also be surprised knowing you’re involved.

The cutscene will continue with Jean, Diluc, Venti and you all discussing the current situation and the quest will end afterward.

Behind the Scenes Rewards

After you have completed Behind the Scenes quest, you will receive Character EXP, Adventure EXP, and Mora as well as additional rewards. 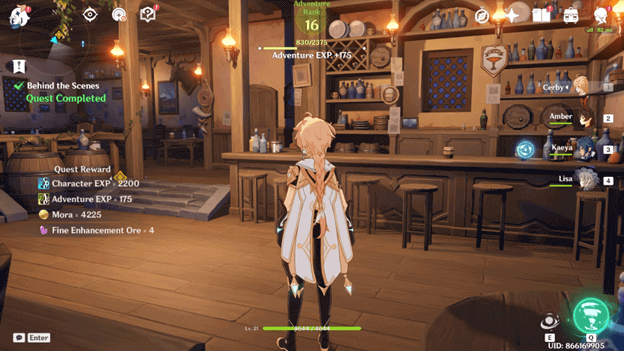 While there was not much action during this quest, a lot more has been revealed, even a little something between Jean and Diluc.

On the more important side, it looks like both Jean and Diluc will now stand by you and help you in your attempt to purify Stormterror.

Next, there will most likely be a plan of action and sooner or later, everyone will play their part in seeing things go smoothly.