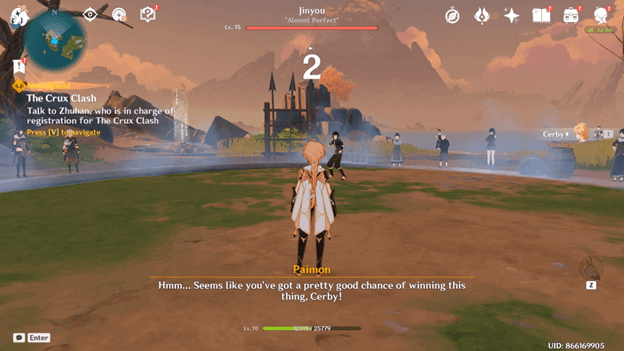 After you have previously accepted to participate in the Crux Clash tournament and for a way to get to Inazuma, you will now be facing three opponents.

During this quest, you will not be able to use any of your elemental abilities, which now makes you rely on the Traveler only and their sword.

It seems that your skills will be tested during this quest, and you will need to win if you are going to continue your journey to Inazuma.

How To Get The Crux Clash Quest?

The Crux Clash quest will put you right in the heat of battle just after you have finished speaking with Zhuhan during A The Path Through The Storm quest. 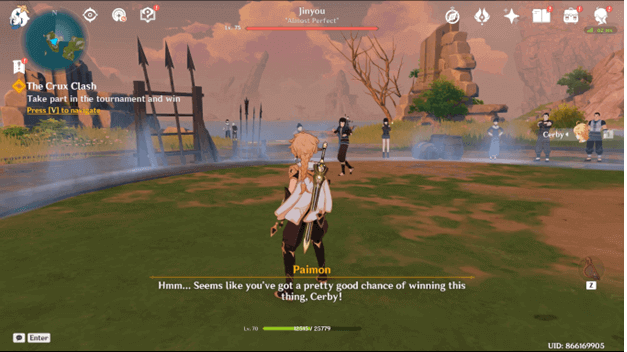 1) Talk to Zhuhan, Who is in Charge of Registration for the Crux Clash

2) Take the Part in the Tournament and Win

Your first opponent will be Jinyou, during this fight, and this will be one easy fight as he pretty much is harmless and will go down in a few sword swipes anyway.

3) Talk to Beidou and Kazuha

Head over to Beidou and talk to her, which will reveal that she has decided to put you straight into the semi-finals as things are too easy for you.

This means that instead of fighting the lower-tier enemies, you will go straight to those who have progressed among the ranks.

4) Talk to Zhuhan Again and Enter the Next Round

Once you have finished talking with Beidou and Kazuha, head over to Zhuhan again to begin participating in the semi-finals.

You can take this time to heal your character or buff them with food before the battle begins to have a good advantage. 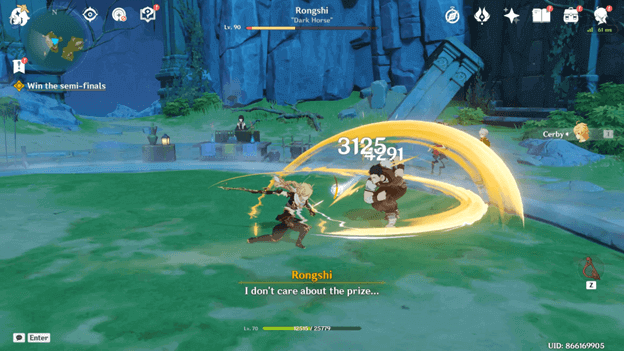 You’ll be fighting against Rongshi, who has similar moves to the Treasure Hunter Pugilists and this time he will be a little tougher than your previous opponent.

Rongshi will be slow, which gives you an advantage and makes it easy to dodge him, which can be done during his charge attacks to land a lot of hits.

After the battle, a cutscene will begin where Rongshi talks to you, where he mentions the reason why he joined the tournament.

7) Ask Around for Info About Your Final Opponent

After talking with Rongshi, you will be up to face your final opponent but first will need to ask around about him by speaking to Uncle Yun.

8) Continue Asking Around for More Info About your Final Opponent

After speaking to Uncle Yun, head over to ask about your opponent again by speaking to Liang who will tell you about his companion, who suffered a hit to the nose.

9) Ask Beidou and Kazuha About Your Final Opponent

After speaking to the other competitors, head over to Beidou and Kazuha and talk to them about the other finalists.

During the dialogue, Kazuha tells you to follow him as he would like to discuss something with you in private, which is later marked by a waypoint. 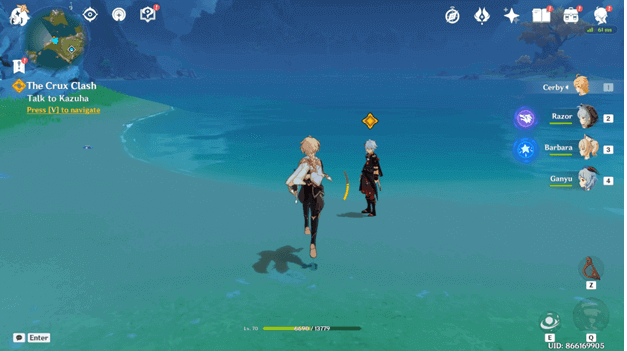 Kazuha will have gone across the island, and you can get to him faster by teleporting to the Domain of Guyun as you make your way to the waypoint.

Once you catch up to Kazuha, head over to speak with him and a dialogue will begin, where he asks you to demonstrate your abilities.

12) Defeat the Monsters to Show Kazuha your Elemental Abilities

During this display of your powers, you will be fighting different Slimes, which you can easily defeat using your elemental abilities.

After fighting the Slimes, speak to Kazuha, who will be impressed with your strategies, and share information about the Shogun God and Inazuma.

Once the scene ends, when you have agreed to go back with him, you’ll end up back at the arena and the quest will be complete.

After you have completed The Crux Clash quest, you will receive Adventure EXP, and Mora as well as additional rewards.

You will also unlock the achievement “Ready, Fight!”. 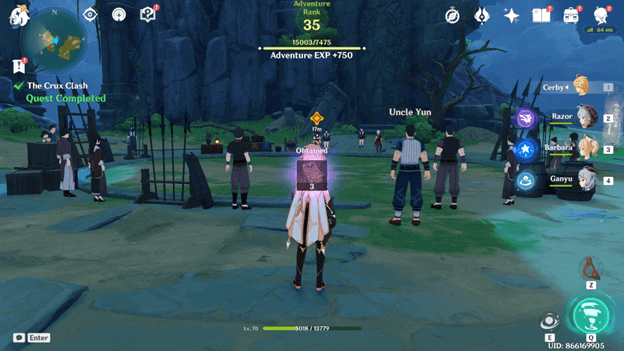 Your participation in The Crux Clash seemed to have impressed a lot of people and you have proven your skill to everyone.

It looks like your abilities were put to a test not only in the tournament without your powers but also during a private display of your skill to Kazuha.

Kazuha was very impressed with how you performed and was able to tell you a lot of things that could later be of help when in Inazuma.