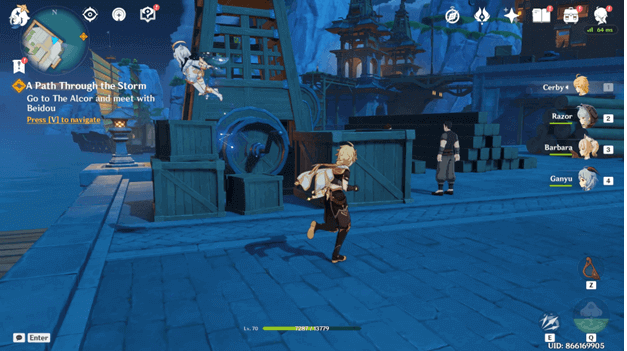 As the new chapter begins, you will still not accept that your sibling has been on the side of the Abyss Order.

During this quest, you must reach the end of your journey to know more about the answer to questions that run through your mind.

You have suggested that you go to Inazuma to find some clues and information about it, and you will find a way to go there.

How To Get A Path Through the Storm Quest?

A Path Through the Storm quest will be obtained once you have reached Adventure Rank 30 and have completed Chapter I Act 4 – We Will be Reunited.

A Path Through the Storm Quest Objectives 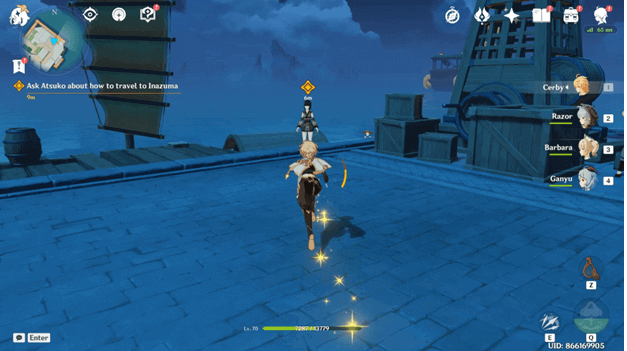 After the previous quest, you will need to head over to Liyue Harbor and can do this by teleporting to the waypoint via the map.

Once you arrive at Liyue Harbor, you and Paimon will go over the events that have happened as well as the fact that your sibling is leading the Abyss Order.

2) Ask Atsuko About How to Travel to Inazuma

Her location will be marked on your map by a waypoint and once you speak to her, a dialogue begins where she suggests finding someone from The Crux Fleet to help you. 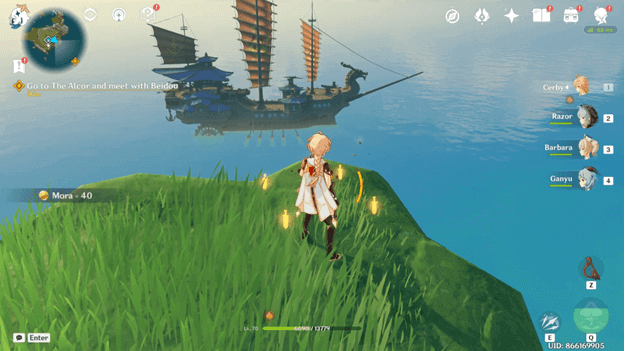 3) Go to the Alcor and Meet with Beidou

The Alcor will be in the ocean but you can get to it by teleporting to the Domain of Guyun, or the Teleport Waypoint nearby.

Once you are on at Guyun Stone Forest, you will need to head to higher ground so that you can glide toward The Alcor.

If you are unable to reach the ship, you can swim towards the rope that will allow you to climb aboard and you can make your way to Beidou.

Once you are aboard The Alcor, a cutscene will begin and you will be hostilely greeted by Juza but afterward, you can head to Beidou.

She will be found nearby and once you approach her, a cutscene will begin where Beidou and afterward, the quest will be complete.

Beidou will tell you about a tournament and later you agree to join in exchange for a ride to Inazuma if you win.

4) Go to the Tournament Arena

After the cutscene, head over to the waypoint that marks the location where the tournament will be held, and you will see a ton of people gathered around.

5) Size Up the Other Competitors

Once you reach the waypoint, you will need to go to each of the competitors and have a short dialogue with each one of them.

Talk to Uncle Yun, Jinyou, and Chai Yi in any order and each one of them will begin to talk about themselves before you can proceed.

6) Talk to Zuhan, Who is in Charge of Registration for the Crux Clash

Head over to Zhuhan, who can be found on the edge of the arena, and talk to her to register for The Crux Clash tournament.

There will be a quick dialogue where she asks you a couple of questions and after you answer them the quest will be completed.

A Path Through the Storm Rewards

After you have completed A Path Through the Storm quest, you will receive Adventure EXP, Mora, and other additional rewards.

You will also unlock the achievement “The Gathering Storm”. 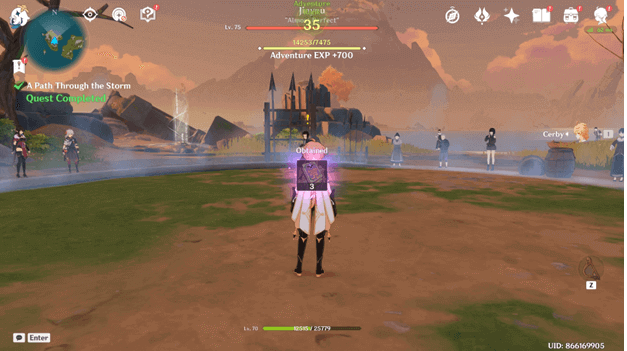 You were successfully able to meet with Captain Beidou with the help of Atsuko and Beidou and have agreed to join a tournament in exchange for a ride to Inazuma.

While other people have joined The Crux Clash for other rewards, you simply chose the prize which will be your ticket to Inazuma.

It looks like you may be facing some experienced opponents in this battle and this time, you will have to face them without the help of your powers.