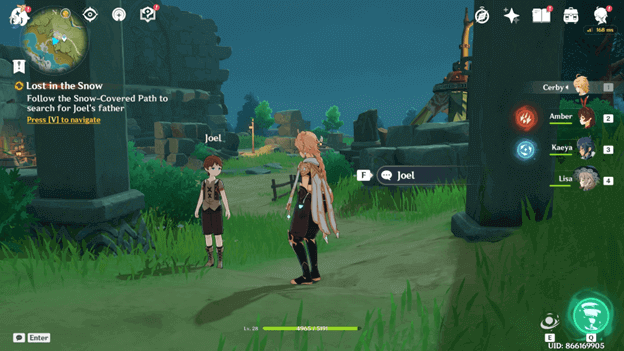 While venturing around in Windwail Highland, you will come across a young boy named Joel who is patiently waiting for his father.

As you speak with the boy, he tells you about his father’s promise to come back but it seems Joel plans on heading to where he thinks his father is located.

During this quest, you will go in Joel’s stead to find the whereabouts of his father to prevent Joel from heading to the dangerous Snow-Covered Path on his own.

How To Get Lost in the Snow Quest?

You will obtain Lost in the Snow World Quest once you speak to Joel who is located at the Dragonspine Adventure Camp in the Windwail Highland.

Once you speak to Joel, he will give you details on where his father is, and the quest will begin.

Lost in the Snow Quest Objectives 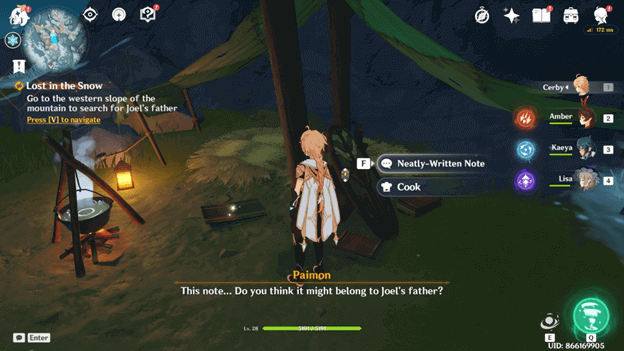 Once you head out to search for Joel’s father, you will need to start at the bottom of the area and make your way toward the waypoint.

Some players get confused and search for the upper area, but the camp is located at the bottom which can be found by gliding down from the Statue of the Seven at Dragonspine.

After arriving at the camp, Joel’s father will be nowhere in sight and there will be a Neatly-Written Note nearby that you must interact with.

The note later explains that he has continued his journey towards the snowy mountain by himself which leads you to the next area.

As you travel around Dragonspine, it would be wise to have Amber or another Pyro character ready to light torches and cooking pots for heat.

The next area will be a short walk away and you simply need to follow the path which will take you to the next camp where Joel’s father should be.

As you approach the next camp, there will be a Frostarm Lawachurl in the area which you may need to fight to safely approach the camp.

There is a chance you can escape the Frostarm Lawachurl and simply take the next note which will be nearby covered in snow.

Use a Pyro character to melt the snow away and you will be able to interact with yet another Neatly-Written Note.

In the note, Joel’s father explains that he will be making a run for the summit and he mentions hill just give it a try and head back if things don’t go well. 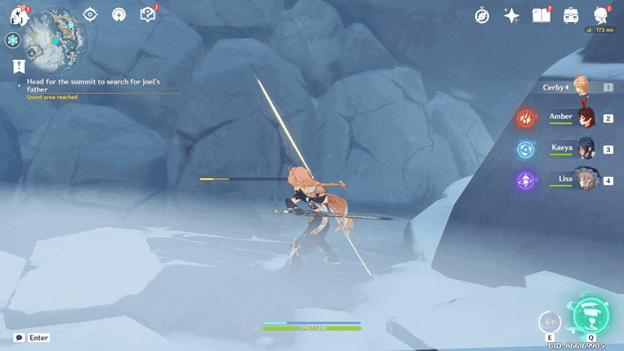 3) Head for the Summit to Search for Joel’s Father

After reading the note, you will need to head to the next area, which is nearby the Statue of the Seven in Dragonspine.

Continue by heading to the marked area and you will see a pile of rocks blocking a path that you will need to destroy.

You may use your normal attacks or skills to damage the rocks and after its health bar is depleted, you will be able to approach the next camp.

At the camp, there will be a note located in the bags which has been left behind by Joel’s father, which tells you about his fate.

4) Report Back to Joel

After you have read the note, there will be no sign of Joel’s father and you will need to head back to the Dragonspire Adventure Camp to tell Joel.

Once you have spoken with Joel, the quest will come to an end and you will be rewarded for your search in Dragonspire.

Lost in the Snow Rewards

After you have completed Lost in the Snow quest, you will receive Adventure EXP, and Mora as well as additional rewards. 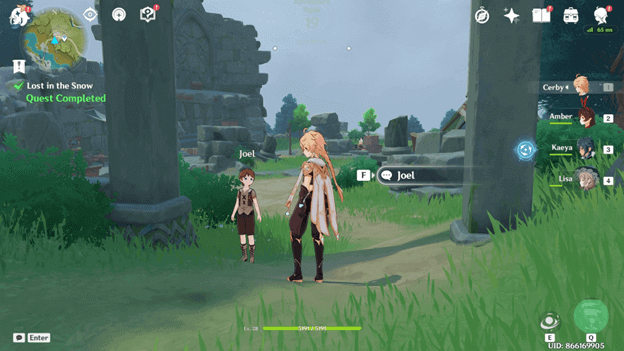 You have followed all of the notes left by Joel’s father, but it seems things came to an abrupt ending and there is no trace of him anywhere.

While Joel is surprised and sad about what has happened, he has not given up and hopes that his father will still return someday.

It is unknown what has become of Joel’s father and at this point, it is unsure whether the two of them will be reunited anytime soon.