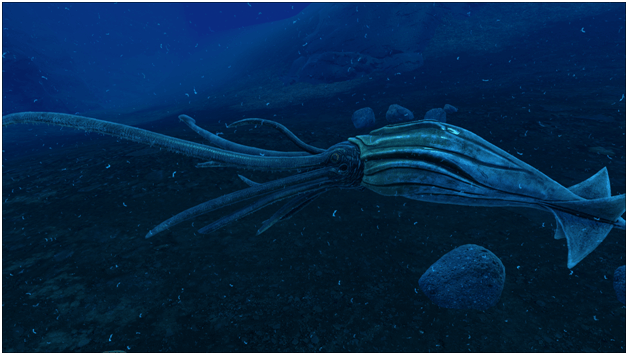 Tusoteuthis Vampyrus is a large underwater creature with a carnivorous diet and a very aggressive temperament that was first seen during the Cretaecous period.

Resembling a squid but with a very massive size, the Tusoteuthis remains to be one of the largest water creatures that have been seen.

These creatures are usually found in the deepest parts of the ocean and prefer to avoid heading to shallow areas as they tend to ambush prey deep in the water avoid letting them escape.

The moment a Tusoteuthis notices a survivor or tame underwater, they will immediately head towards them to begin an attack.

Tribes use the Tusoteuthis for both attacking enemies underwater and for taming other sea creatures but it has been known that these creatures are capable of assisting with assaults on underwater bases. 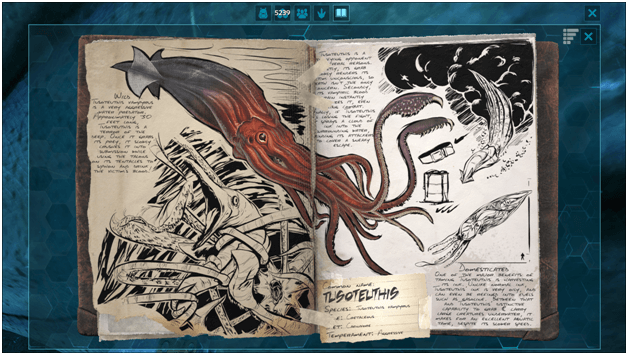 The Tusoteuthis Vampyrus is one of the most aggressive creatures in the water and will continuously follow its prey as long as it senses them within the area.

This creature grabs on to its prey with its tentacles and crushes them until there is no life left but, in the event that it is incapable of fighting, it will escape while leaving an ink cloud to hinder its enemies.

Many fear this creature due to its abilities to weaken those that come in contact with it, whether it be the ink cloud that it can release or the toxin that its tentacles are capable of delivering.

Tribes that are able to tame a Tusotheusis make use of its deadly prowess underwater and also benefit from its ability to produce a special oily ink that may be used in crafting and even converted into fuel. 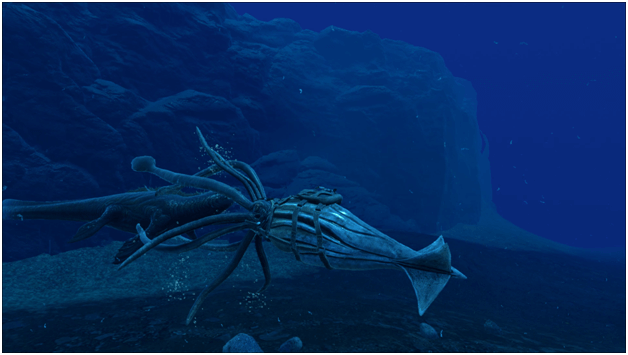 The Tusoteuthis grabs onto its prey and holds it in place and inflicts it with torpor which will eventually kill the creature or survivor into paralysis.

While the Tusoteuthis is holding on to its victim, it may still use its normal attack to crush it, dealing damage and even kill it. 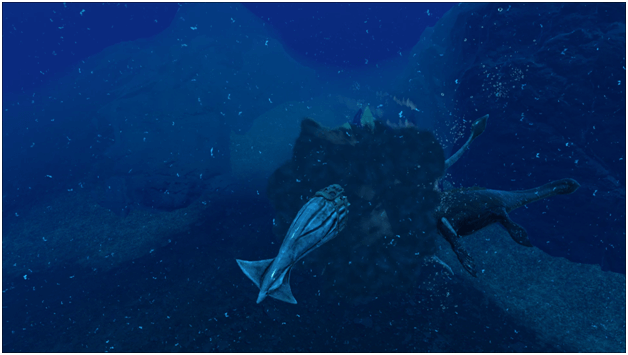 The Tusoteuthis releases a cloud of ink around it which obscures the vision of those that come in contact with it.

Stamina of survivors also becomes drained while they are affected by the ink cloud.

The Tusoteuthis will continuously generate a special oil over time which can be collected from its inventory.

The Tusoteuthis is capable of dealing a large amount of damage with its tentacles and may easily take out single enemies that it grabs or several enemies that are close together.

Being able to grab onto creatures, the Tusoteuthis can easily inflict torpor on its enemies without damaging them, making it easy to tame underwater creatures.

This creature can use its grab ability to either inflict torpor to paralyze enemies or even drag them away in the water and along with its ink cloud ability, it can temporarily blind enemies.

The Tusoteuthis is capable of withstanding a lot of damage which helps when fighting other enemies and when holding on to creatures that may fight back during taming. 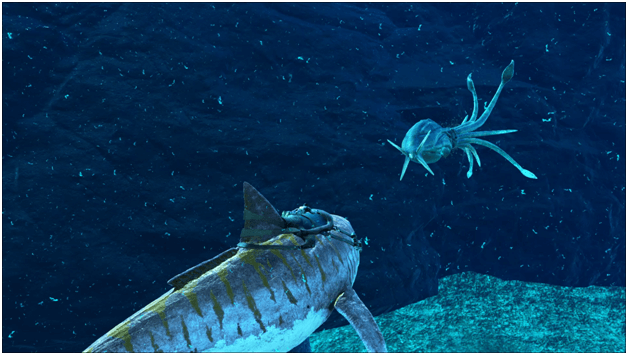 Tusoteuthis are passively tamed and will require that it is holding on to another creature in order for you to feed it the proper taming food. 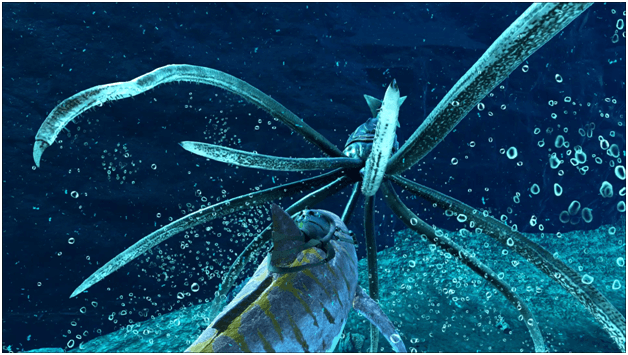 Approach the Tusoteuthis that you wish to tame and allow it to grab onto your mount which will disable your movement but make the creature vulnerable for taming.

Once your mount has been grabbed, quickly dismount and head towards the center of the Tusoteuthis and go between its tentacles where its mouth will be. 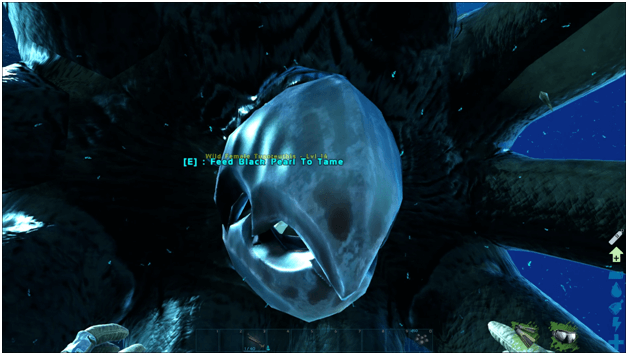 Approach its beak-like mouth and feed it Black Pearls (be sure to have some placed in your last item slot) and repeat this until the taming bar is full.

Black Pearls are fed by groups of 50 so be sure that you have plenty with you before you attempt to tame a Tusoteuthis. 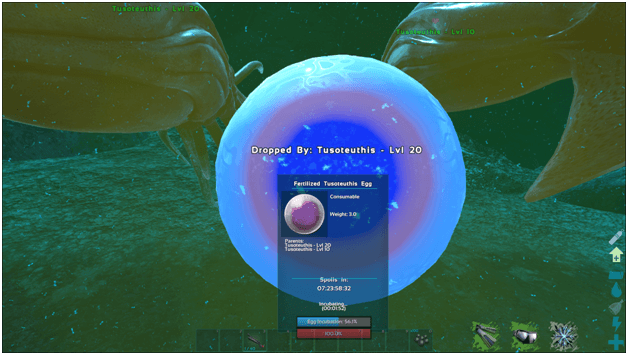 The Tusoteuthis is capable of mating and once it has successfully mated with the opposite gender, the female will release a Fertilized Tusoteuthis Egg.

The Tusoteuthis is found in the deeper parts of the ocean and will not attempt to go to shallow areas.

Maps where the Tusoteuthis spawns:

The following are spawn maps where the Tusoteuthis can be found 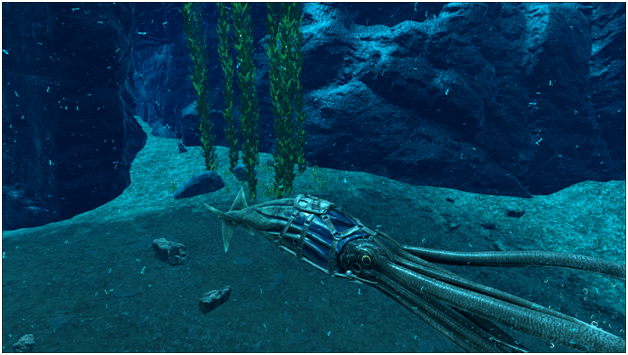 The Tusoteuthis is one of the largest creatures in the water and is capable of holding on to large creatures both underwater and even out of it.

These creatures are known to be very deadly and can easily take out survivors and their tames when traveling alone and unprepared.

Tribes have been able to utilizes these creatures to tame some of the strongest underwater creatures such as Mosasaurus or Plesiosaur and have even been known to be able to lay siege to underwater bases.