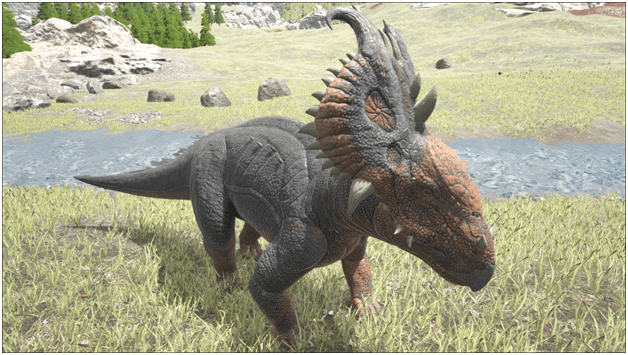 Pachyrhinosaurus Mitisaura are herbivorous creatures with evasive temperaments that were first seen during the late Cretaceous period.

The Pachyrhinosaurus shares a resemblance to the Trike but is unique in its own way, being a more defensive and manipulative creature rather than a straight on tank.

This creature is usually found wandering in plains and other grassy areas where it can feed on bushes and relax in pastures.

These creatures will usually ignore humans and their tames but will respond when threatened and even use their ability to control moods.

Tribes that tamed the Pachyrhinosaurus make use of it when it comes to defenses as well as taming and luring creatures due to its ability to release pheromones. 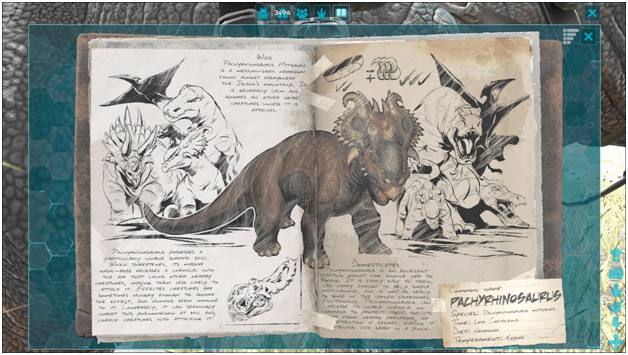 The Pachyrhinosaurus has a unique reaction when it is threatened which is to release chemicals into the air to control the behavior of creatures around it, making them either calm or aggressive.

While these creatures remain abundant in most areas, they usually survive most predators due to their defense mechanism as well as their efforts to fend off enemies together when there are other species of them nearby.

These creatures are great mounts for tribes that are starting off as they can either attract herbivores for easy taming or for hunting as well as hide their presence from predators. 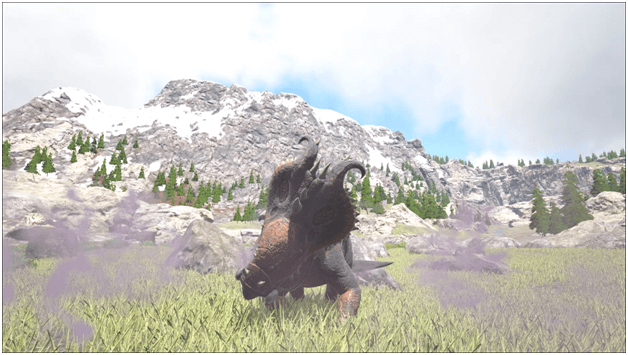 The Pachyrhinosaurus releases chemicals into the air which causes most predators to lose aggressiveness towards it. 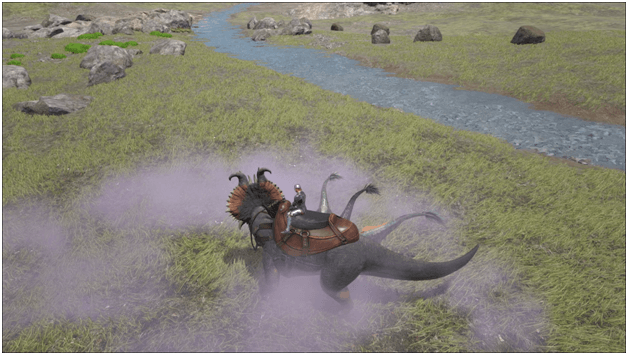 Even if wild creatures are already attacking, once the Pachyrhinosaurus uses this ability, the attacking creatures will stop and ignore the presence. 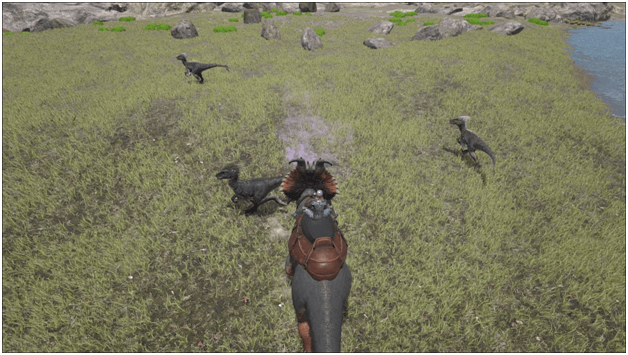 This effect will last for 20 seconds and will cause wild creatures that are affected to ignore you for the duration of the ability. 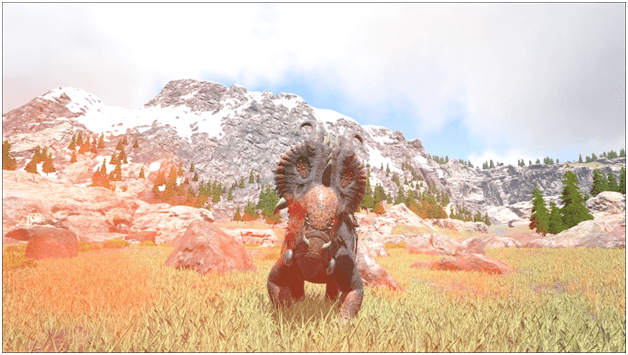 The Enrage cloud differs from the other ability by instead of making wild creatures ignore you, it forces them to attack you. 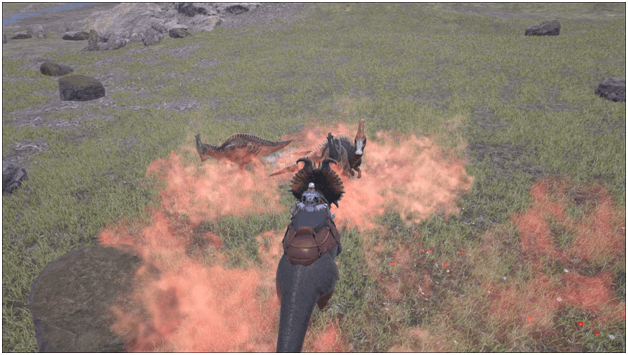 Creatures that are affected will begin to chase and attack you regardless of them being aggressive or docile in nature. 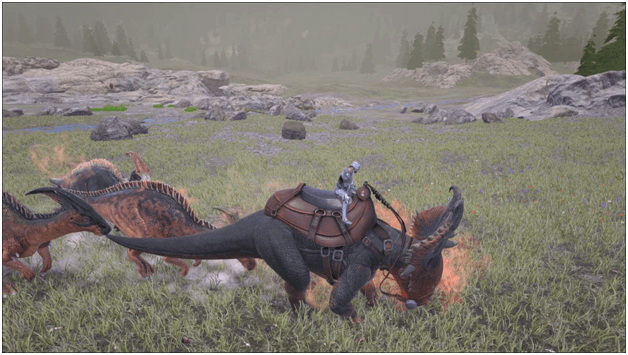 The rage effect will last for 20 seconds and this will cause the affected creatures to continuously chase and attack you until the duration is over.

Not only does the Pachyrhinosaurus have the ability to control enemy behavior but it also can withstand a large amount of damage, especially with a good saddle.

With its fairly decent amount of health and a good saddle, using the Pachyrhinosaurus to tank turrets can allow it to efficiently soak from the front since its face takes less damage than its body and this works very well with a good saddle equipped.

Being capable of knocking enemies back or causing enemies to ignore you for a short amount of time allows the Pachyrhinosaurus to keep you safe for extended periods of time.

Since the Pachyrhinosaurus is capable of making enemies lose aggression and even attracting those that you need to kill, it makes a suitable travel mount for those starting and who are more advanced in progress.

Since the Pachyrhinosaurus can force enemies to attack it, survivors may utilize this when taming creatures that tend to run away so they can easily be tamed or trapped.

How to Tame Pachyrhinosaurus? 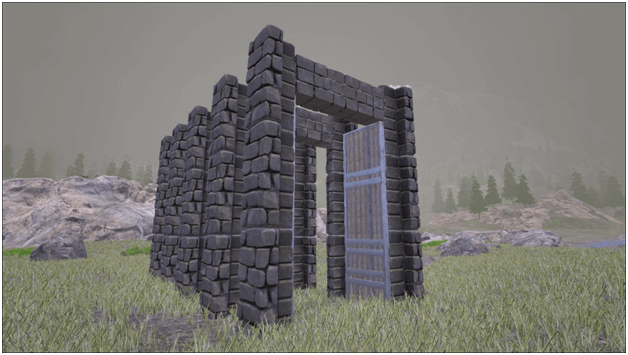 The Pachyrhinosaurus is capable of knocking you back and can sometimes be a nuisance to tame along with its defense mechanism which makes the utilization of a trap more efficient for taming it. 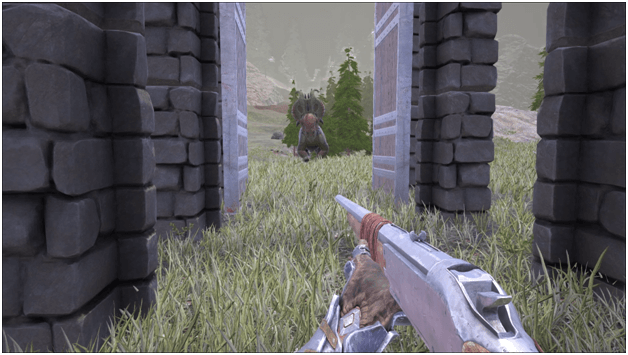 Once the trap is set, get the creature to chase after you by attacking it and lure it inside the trap that you have created. 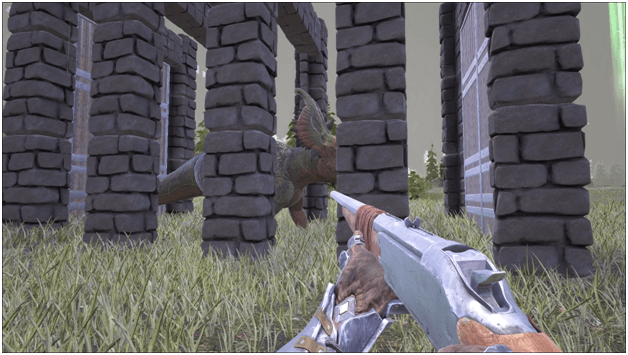 Once the Pachyrhinosaurus is trapped, rush to the other side and close the gate and begin knocking it out with your taming weapon. 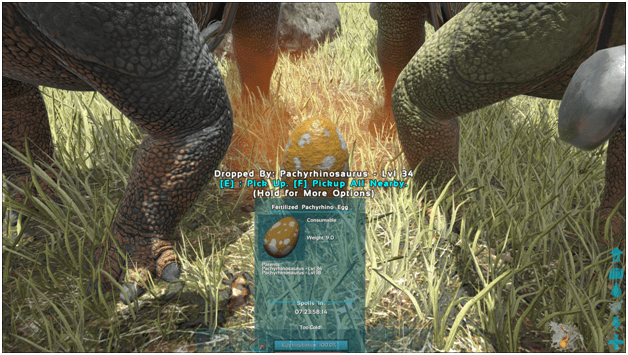 Pachyrhinosaurus can be found all over the maps such as in grassy areas and plateaus where there is room enough to roam.

Maps where the Pachyrhinosaurus spawns:

The following are spawn maps where the Pachyrhinosaurus can be found 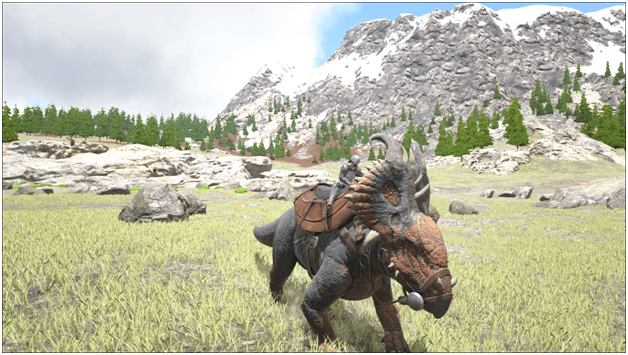 The Pachyrhinosaurus is capable of being utilized in many situations such as taming, hunting and getting past dangerous areas due to its abilities to enrage wild creatures or to hide itself and its owner.

Tribes have been known to utilize its strong skull to shield it and its rider from bullets from turrets when raids are underway.

Whether you need to get through a dangerous area full of predators or simply herd wild herbivores to your location, the Pachyrhinosaurus is capable of doing both and can make such tasks more efficient.

How To Make Simple Kibble in ARK