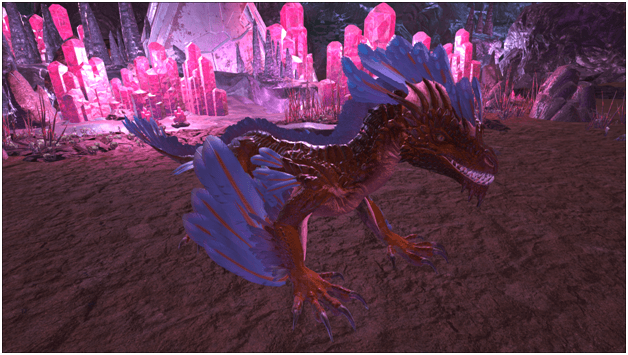 Draconis Obscurum is a carnivore of strange origin from an unknown time along with its aggressive temperament.

This creature appears to be kind of reptile which is covered with feathers that grant it the ability to glide through the air and it also possess an ability which was derived from creatures such as the chameleon which allows it to camouflage itself.

These creatures are usually found lurking around their nesting area, guarding their eggs and searching for prey that it can sink its teeth into.

The Rock Drake does not initially chase from a far distance but once a survivor or other tame comes near it or steals an egg from its nest, it will begin its assault as soon as possible.

Tribes that have tamed the Rock Drake have the opportunity of having one of the best stealthiest scouts as well as deadly assailants that the Ark has within it. 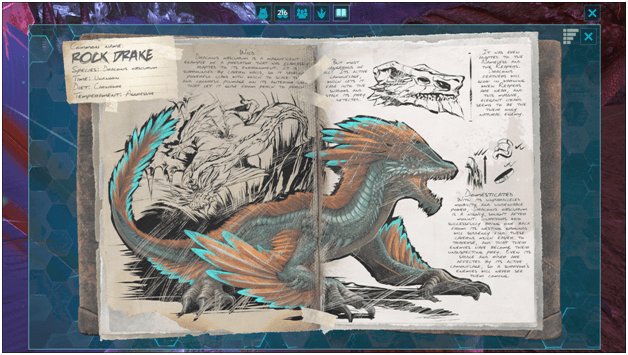 It is shown that the Rock Drake has adapted well to its environment, having claws for climbing, being able to blend itself with the environment and even having developed the ability to glide around caves.

Carnivores that are reckless usually end up getting hurt when attacking the Rock Drake as they are unable to easily kill it and end up getting a heavy hit from its tail.

Its ability to camouflage makes it feared by many survivors and creatures alike as this allows it to stalk its prey.

Due to its excellence when it comes to adaptation, this creature has even found a way to protect itself and those that own its against reapers and the namely as its feathers will begin to glow and stand, showing that the presence of such enemies is nearby. 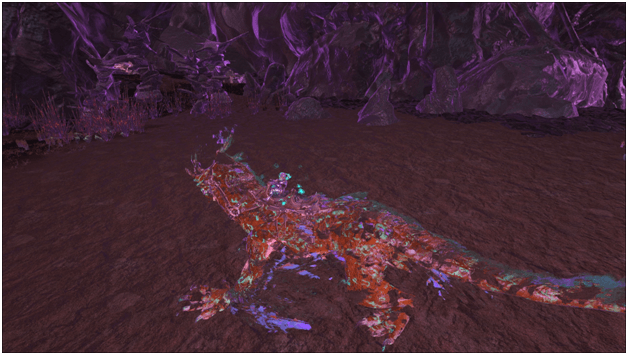 The Rock Drake begins to camouflage itself and its rider, making it harder for enemies to see them and making them completely invisible to wild creatures. 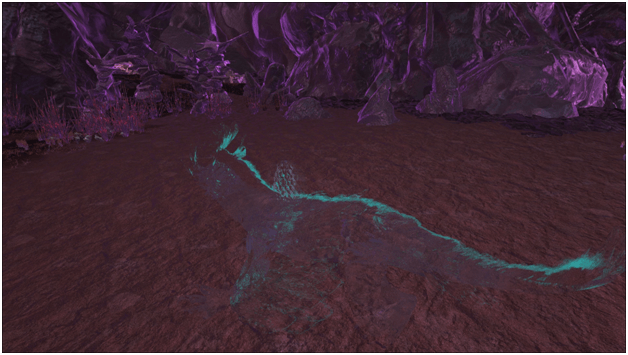 While this ability is active, the Rock Drake will remain camouflaged and its stamina will start to drain over time until the ability is turned off. 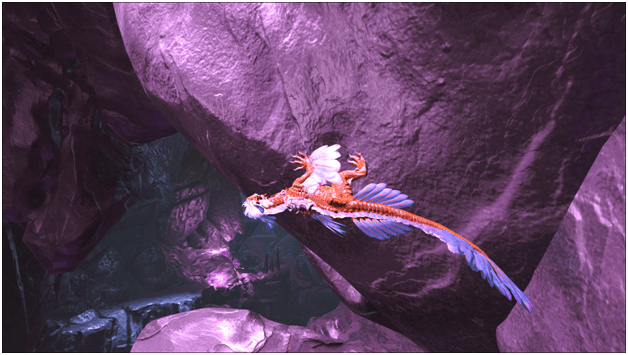 With its ability to climb on top of surfaces such as structure or cave walls and ceilings, the Rock Drake may use this at will.

Rock Drakes may toggle between climbing mode and their regular movement but their stamina will be drained as they are climbing or hanging. 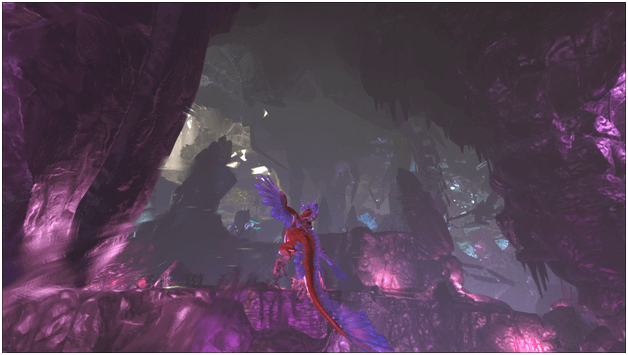 Using its large feathers and unique body structure, the Rock Drake is capable of gliding on a whim whenever it pleases to.

Hold the sprint key while airborne to glide. 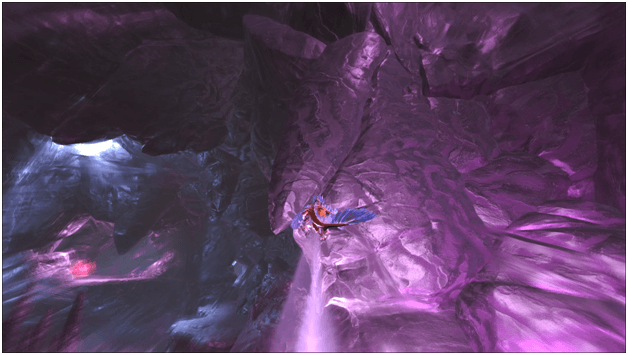 While airborne, gliding or climbing, the Rock Drake may pounce to a surface, damaging enemies and landing quickly to that surface.

If the surface is climbable, the Rock Drake will automatically land there and will be latched on to the wall.

This ability can be used to get to any surface regardless of the angle as long as the surface is within range which is shown when there is a targeting reticle.

While in the air or climbing a surface, a targeting reticle will be displayed as you destination for the pounce. 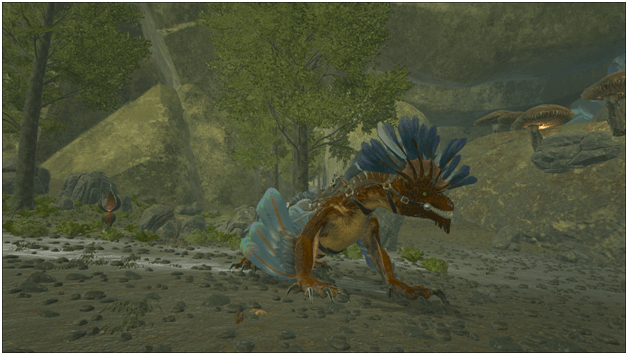 Rock Drakes can sense the presence of Reapers and will show this by appearing very cautious, having their feathers pointing up and glowing while looking around repeatedly.

The Rock Drake can get around anywhere due to its ability to climb, swim, glide and move very fast while even remaining camouflaged, making it extremely safe to travel on.

This creature does provide a good amount of damage and can even be equipped with a Tek Saddle which can cause a lot of damage to both creatures and buildings.

With its ability to camouflage, climb and glide, it can easily get into areas that are heavily protected as they can sneak past defenses with ease.

Being able to be equipped with a Tek Saddle and position itself almost anywhere, the Rock Drake is a very strategic mount to have during raids as it can angle itself while firing projectiles from its Tek Saddle.

The Rock Drake can carry an additional passenger and has a good amount of weight which allows its owners to bring equipment or resources with them and make use of its ability to get around quickly for easy transportation of them.

How to Tame Rock Drake?

Rock Drakes cannot be tamed and instead must be hatched from eggs that have been stolen from wild Rock Drake nests. 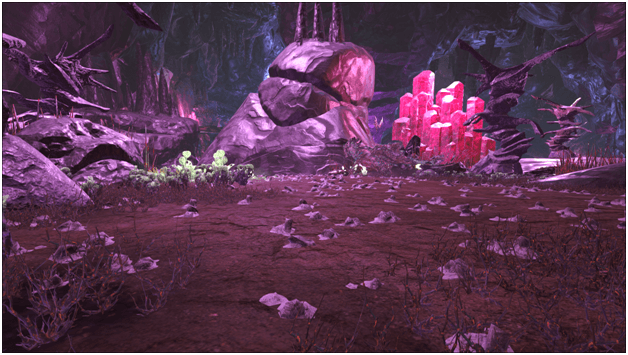 In order to get a Rock Drake, you must steal a Fertilized Rock Drake Egg from one of the nests that are lying around and hatch them later on.

Beware that if you take a Rock Drake egg, they will respond aggressively and attempt to kill you so be sure that you are ready.

Once the Fertilized Rock Drake egg has been taken back to your base or hatching area, you may then hatch the Rock Drake from the egg and later on raise it from being a Baby until it is a full grown Rock Drake.

The Rock Drake cannot be tamed by knockout and a certain kind of food and once a baby is hatched or a fully grown one is owned by a tribe, it will normally eat any kind of meat provided.

The Rock Drake cannot be bred and instead, tribes must hatch multiple eggs in order to obtain several of these creatures.

Rock Drakes are usually found in the deeper parts of the Aberration map, roaming around their nesting grounds.

Maps where the Rock Drake spawns: 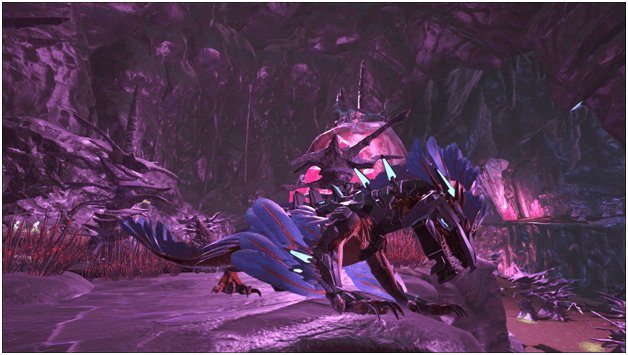 The Rock Drake is probably one of the most versatile mounts that are out there, being able to catch up to anything that it is chasing by means of climbing, gliding or simply outrunning them.

Many questions the origin of this creature but behold its beauty and amazing ability to blend in with the environment which other tribes make use of when in war or special raids.

Having a Rock Drake provides any tribe with a large benefit due to its ability to get around quickly and partake in raids and battles due to its unique abilities.