Keeping your health up is one of the most important things in Ark as it would be best if you avoided dying all the time, especially when you are far from your base.

With a good supply of Medical Brew on hand, you can safely travel around, explore and fight enemies while having the ability to heal yourself.

Medical Brews can easily be made during the earlier phases of the game and later on, it is possible to keep a huge surplus of them.

Consuming a Medical Brew will restore 40 points of your health over a duration of 5 seconds and this can be used multiple times in order to increase it further.

The effects of the Medical Brew will not be canceled if you take damage and will continuously heal you as long as its effects are active.

Using a Medical Brew while you are taking damage over time can significantly counter it, giving you a better chance to survive.

How to Make Medical Brew (Recipe) 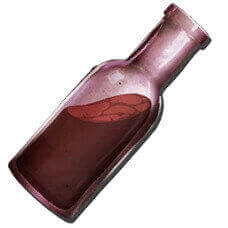 The Medical Brew can be cooked in a Cooking Pot or an Industrial Cooker, which must have a supply of water and fire to cook.

Below are the Medical Brew ingredients:

All of the ingredients required to make Medical brew can be farmed early on in the game and this can help you prepare for when you are exploring later on.

The Medical Brew ID for spawning is: cheat giveitemnum 52 1 0 0

The Medical Brew description is very straightforward, mentioning the following: “This brew doesn’t have any nutritional value, but it promotes healing”

Does Medical Brew Work on Dinos?

Only humans may use Medical Brew and the option to consume them will not be available as well as the item will be darkened when in a Dino’s inventory.

Why Medical Brew is Not Working?

If the Medical Brew does not work, this is most likely due to a bug, which can be sorted out by killing your character and respawning. Sometimes the bug is simply visual and it may only require that you reconnect to your server to fix the issue from happening.

While Blood Packs may seem to be a good way of healing and a cheap way to do so, they are not as effective against Medical Brews.

Blood Packs heal you for 25 health points over 2 seconds, meaning you get 12.5 health per second and this may seem better at first.

What makes Medical Brews better is that you can farm for them in bulk but Blood Packs will take time and require the consumption of your health.

Medical Brews take 2 hours to expire and can be preserved to last even longer, while Blood Packs will expire in 30 minutes.

Whether you are out exploring, delving into caves, or fighting against other creatures or players, Medical Brews come in handy a lot.

These are pretty much what you would consider being the health potion in Ark, which benefits only humans as they do not regenerate as fast as Dinos.

Having a good stock of Medical Brew will be good for the later parts of your progression, allowing you to do more without dying or the need to return to base or farm to heal.