To help your tamed creatures out, you can craft a Mushroom Brew so that they can gain temporary protection against radiation.

This consumable is only consumable by Dinos and was meant to help them survive the radiation on maps such as Aberration.

You can feed a Mushroom Brew to your Dinos or other creatures that you have tamed to grant them 120 seconds of protection from radiation.

While under the effects of a Mushroom Brew, you can safely travel dangerous areas but should be aware of the timer and feed them another one afterward.

While a tamed creature already has the Mushroom Brew buff, you will not be able to feed it again until the 120 seconds are done.

How to Make Mushroom Brew (Recipe) 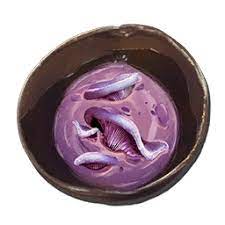 The Mushroom Brew can be cooked in a Cooking Pot or an Industrial Cooker, which must have a supply of water and fire to cook.

Below are the Mushroom Brew ingredients:

“Double, double, toil and trouble, fire burn and cauldron bubble… this is a lovely mushroom brew, a healthy syrup to protect your pets from radiation!”

Does Mushroom Brew Work on Dinos?

Mushroom Brews are intended for Dinos but these cannot be consumed by humans, which means if you want to travel in a zone with radiation, you need Hazard Suit armor.

It would be a good idea if you kept a good supply for your Dinos to make sure when the buff runs out, you can always feed them another Mushroom brew.

Ensuring that your tamed creatures can also survive the radiation is important, especially if you tend to use them as you travel to dangerous locations.

It is important to keep an eye on the timer to make sure your tamed creatures don’t end up getting hurt and feed them the Mushroom Brew again.

With Hazard Suit Armor for your characters and Mushroom Brews for the Dinos, you can travel around radiation zones safely, aside from the wild creatures that lurk around.