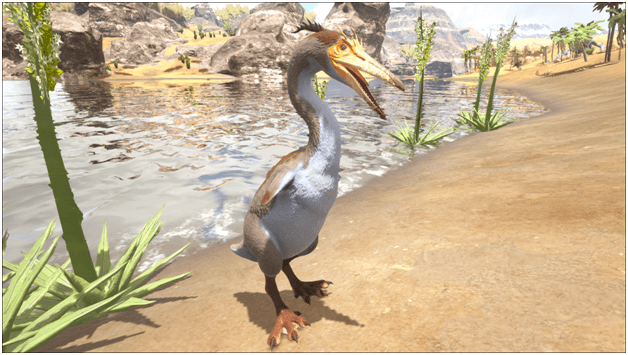 The Hesperornis Avenatantes is a piscivore from the late Cretaceous epoch with a passive temperament.

These cute creatures may appear to be quite harmless and seem to be a good pet but there is no doubt that they can be pesky at times.

Hesperornis can usually be seen near the water, swimming around and catching fish that it loves to eat.

While they initially do not appear to be threatened by anything at most times, a slight sign of aggression may cause them to attack humans that get too close to them.

Survivors have found that these are excellent fish killers and after it has had a delicious fill of its favorite fish, it rewards those who care for it with a rare golden egg that can make almost any creature become experienced in a short amount of time. 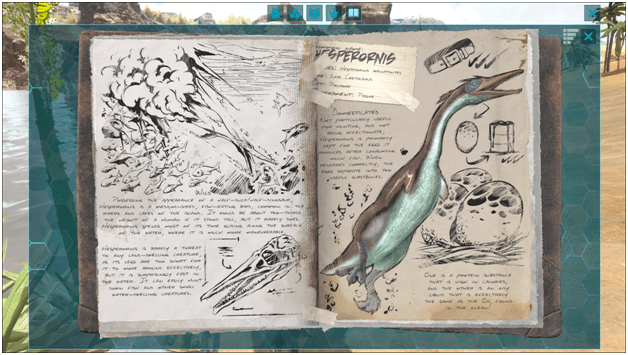 A Hesperornis appears to be the mixture of a duck and a dinosaur and is adept at hunting fish as many survivors have seen it easily kill fish with a single dive.

These creatures are barely a threat to any creature on land as its legs are too short for it to even catch up to anything it chases but it still does attempt to attack when threatened.

Hesperornis are mainly kept for their eggs since they may be utilized for the resources that they can be split into while the other one is capable of making tames grow stronger over time much faster than they normally would. 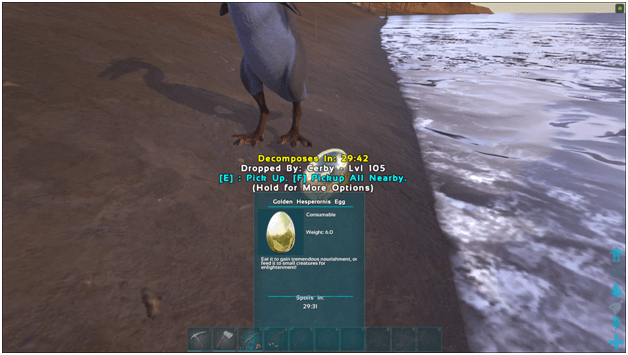 After the Hesperornis has killed and eaten 25 fish, there is a chance that it will lay a Golden Hesperornis Egg which anyone nearby can collect.

Hesperornis are very adept at killing fish that they are capable of killing them instantly with a single dive into the water.

Its golden eggs may be used to feed creatures to give a boost in experience gain while its normal eggs can be cooked into oil.

Due to its ability to kill fish easily, these can provide tribes with an abundant source of fish meat to cook for themselves or to feed their creatures. 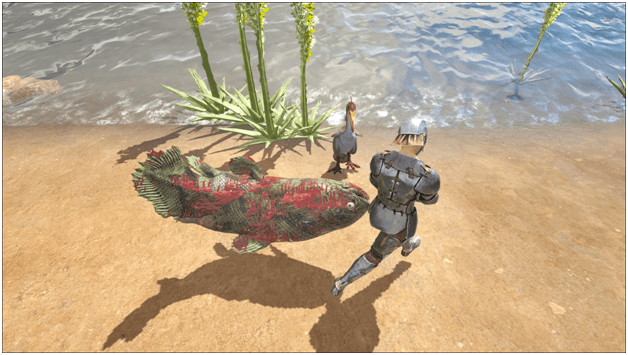 Hesperornis are passively tamed and will eat fish that have been killed which is done by dragging the fish body to them and feeding it.

A fish that has been killed by an Ichthyornis will fill the taming bar faster and result in better taming efficiency.

Dead Fish (Drag towards it to feed)

A Hesperornis is too small to ride and has no saddle for doing such but it can be mounted on your shoulder instead. 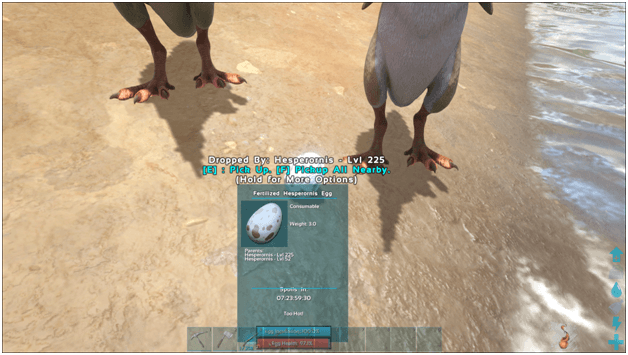 When two Hesperornis mate, the female will lay an egg which is distinguished by its white color with brownish spots on it.

Hesperornis are usually spotted where there are less trees and where they can get a better view such as plains and plateaus.

Maps where the Hesperornis spawns:

The following are spawn maps where the Hesperornis can be found 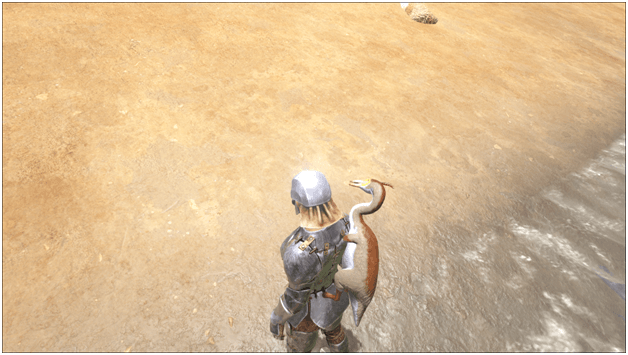 These creatures may appear cute at first but once you get a closer look you would be surprised as its head appears to be that of a mixed dinosaur which most likely helps with its ability to hunt fish.

Hesperornis can be a big help to those who need to level up their tames fast due to the bonus experience from the golden eggs that they lay.

Although these creatures are not powerful enough to kill other tames and survivors, they do make up for it by providing players with essentials, even organic polymer when kept for slaughtering.