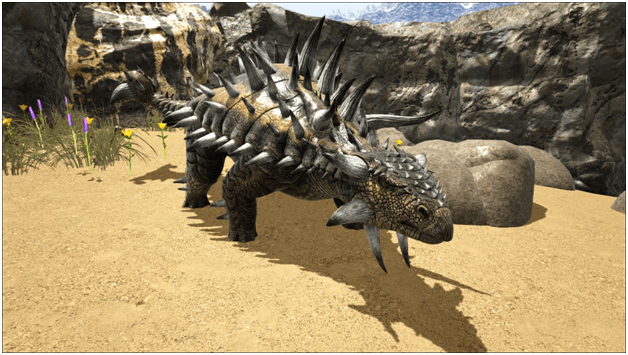 The Ankylosaurus Crassacutis is a herbivore from the late cretaceous period that has a docile temperament.

Despite being a herbivore and calm creature, the Ankylosaurus does not make an easy target when a predator hunts for its prey due to its thick skin and spikes on its back.

Ankylosaurus tend to wander around alone or in smaller groups and may appear harmless but will always respond to threats by fighting back.

Being approached by a survivor will not cause any hostility when it comes to the Ankylosaurus but when threatened, it will use its powerful tail to bash at you until dead.

Tamed Ankylosaurus are one of the favorite choices of tribes due to its ability to shatter ores with its tail, making it excellent for farming different resources from them. 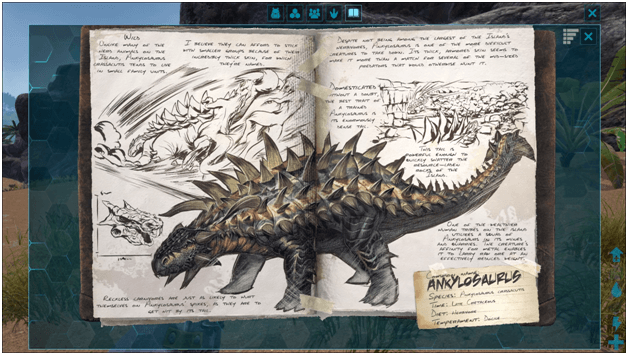 Due to their thick skin and ability to fight back when attacked by predators, Ankylosaurus appear to not have to travel in large groups.

Carnivores that are reckless usually end up getting hurt when attacking the Ankylosaurus as they are unable to easily kill it and end up getting a heavy hit from its tail.

The tail of an Ankylosaurus is so powerful that it can shatter rocks regardless of what resources are inside them.

Since the Ankylosaurus has an affinity with metal, carrying metal ores causes the resource to have a reduction of weight on it. 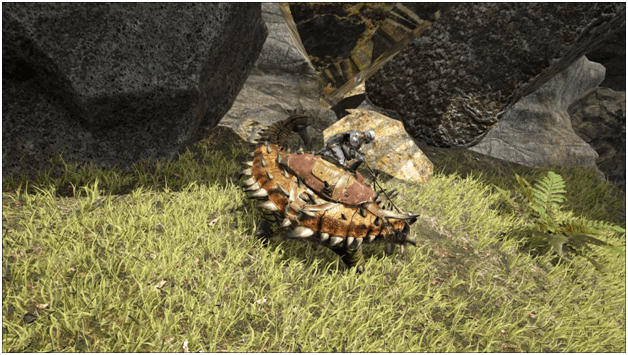 Although it appears to be a regular attack, the tail swing of the Ankylosaurus is done with such force that it knocks enemies back and can shatter different resources such as rock, metal nodes, crystal, obsidian and more.

This makes the Ankylosaurus an important addition to any tribe as it is capable of harvesting large amounts of ore and similar resources.

The Tail Swing animation occurs when facing more to the right side of the Ankylosaurus. 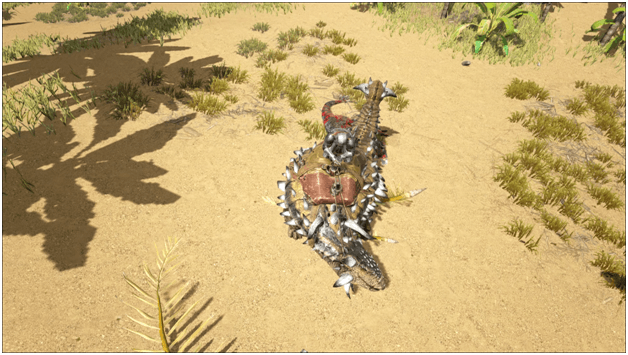 Another variant of the Ankylosaurus’ attack is the Tail Slam which causes it to swing and do a slam with its tail, hitting other areas different from the reach of its normal Tail Swing.

The Tail Slam animation occurs when facing more to the left side of the Ankylosaurus. 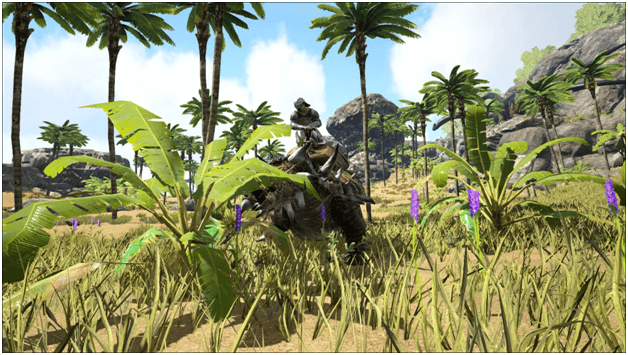 The Ankylosaurus is capable of using its Bite attack which allows it to harvest berries from bushes in moderate amounts.

Being a natural metal harvester, the weight of metal carried by the Ankylosaurus is reduced by 75%

With its ability to destroy ore type sources such as rocks, metal nodes, crystals and obsidian, the Ankylosaurus can effectively gather large quantities better than tools can.

Its bite attack is a great way to farm berries early on as it can harvest in a wide area and collect a substantial amount for tribes.

Ankylosaurus may not deal the highest damage but they can hold a spot pretty well due to their ability to knock enemies back with its powerful tail swings.

Due to its high health and thick hide, the Ankylosaurus is capable of withstanding damage from several sources all at once.

With its thick hide and a good saddle, the Ankylosaurus passes as an excellent turret soaker although it is recommended to drop it from above or command it to move to the turrets as riders will not be well protected.

How to Tame Ankylosaurus? 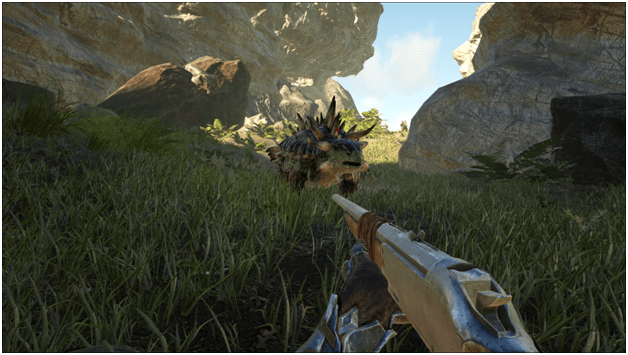 An Ankylosaurus can easily be tamed by shooting at it and running away or more preferably side stepping which allows you to move at a moderate speed while it chases you. 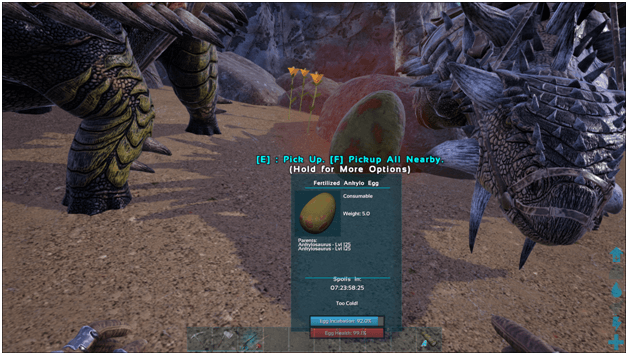 An Ankylosaurus will drop a Fertilized Ankylosaurus Egg that is a yellowish brown color along with brown spots on it once it has finished mating. 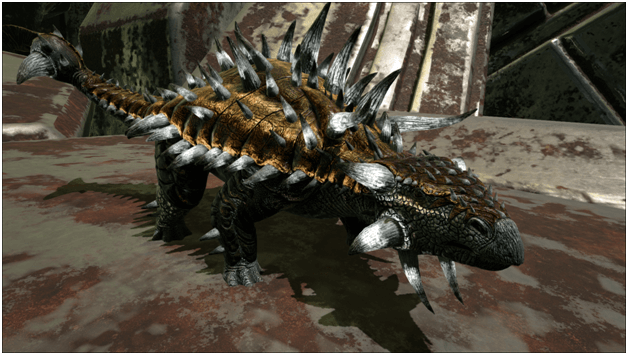 Aberrant Ankylosaurus can be found in the Aberration and Valguero maps.

Ankylosaurus can usually be found wandering in different locations on different maps, mainly in forests and jungles.

Maps where the Ankylosaurus spawns:

The following are spawn maps where the Ankylosaurus can be found 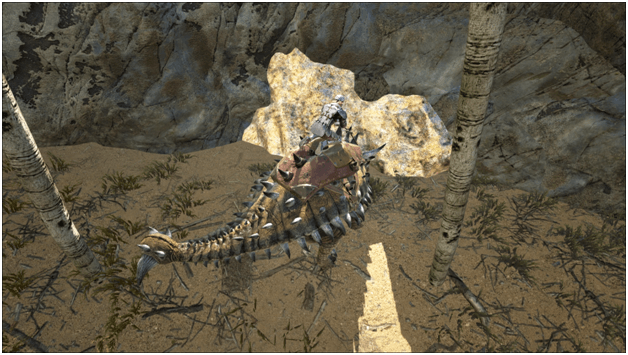 An Ankylosaurus is a top choice for tribes that wish to collect an abundant supply as metal as well other resources such as crystal, obsidian, rock and flint with the addition of also being able to carry a large load, especially metal ore.

The Ankylosaurus can hold its own in a battle as it can knock enemies back along with dealing damage to those unfortunate enough to get within range of its tail attacks.

When it comes to defense, an Ankylosaurus is not a first choice but it does to its part when under attack but its main use is more focused on the gathering of metal ore.