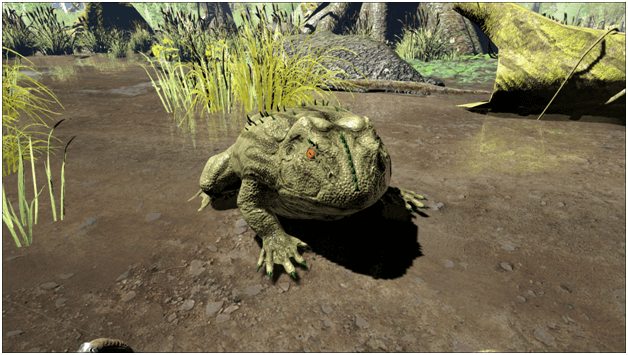 The Beelzebufo Palucocus is a large carnivorous amphibian from the late cretaceous period and has a languorous temperament appearing lazy most of the time or inactive.

Beelzebufo are a species of large frog but instead of being as harmless as they appear, these creatures have a powerful toxin that can cause paralysis at a rapid rate.

They will usually wander around harmlessly but once they are attacked, they will respond aggressively by licking its enemy with its tongue, inflicting damage as well as increasing torpor until they knock out their attacker and eventually end up killing them.

Beelzebufo will ignore players unless they are attacked or other Beelzebufo around them have been threatened, causing them to respond and attempt to turn the attack around. 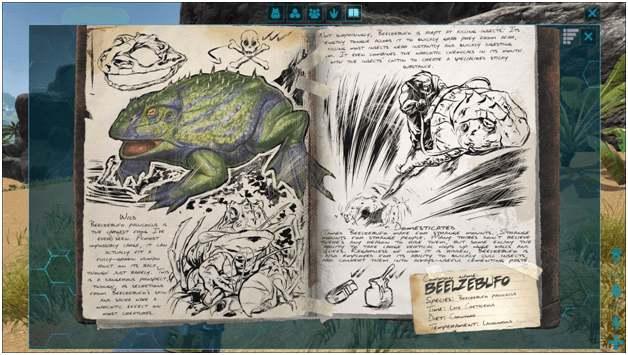 Amongst all of the frogs that have ever been seen, Beelzebufo remain the largest and are even big enough for survivors to ride on.

Similar to many frogs, the Beelzebufo preys mostly on insects, making it adept at killing them and as an addition to this, they can chew up the chitin and mix it in their mouth with their saliva to create cementing paste

Tribes do not usually use Beelzebufo since they appear to be useless but others make use of them to do high vertical jumps to get over obstacles and their ability to create cementing paste form killing insects. 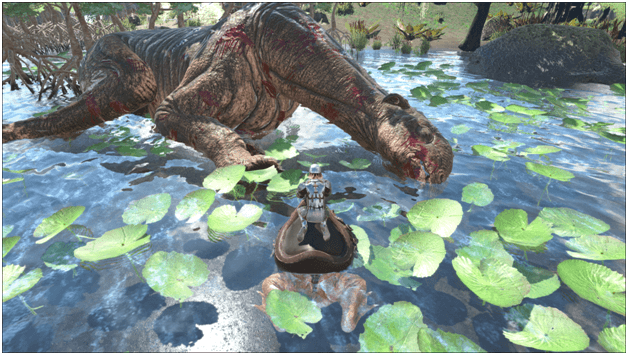 The Beelzebufo’s attacks build up torpor which eventually knock out enemies and repeatedly attacked the knocked down enemies will keep them in their paralyzed state.

Its basic attack is a long reach out forward with its tongue which damages enemies directly in front of it while its secondary attack hits closer but in a wider angle.

The Beelzebufo can assist in taming by knocking creatures out as well as it can do the same to enemy tames and their owners.

Due to its ability to jump, Beelzebufo are capable of jumping on top of enemy bases or over their gates and walls.

By killing insects, it can turn the bodies into cementing paste which can be collected from its inventory.

Beelzebufo can swim in the water, making them a good aquatic mount as well as a good land mount for getting around in different situations.

Wild Beelzebufo do not chase you at a fast pace and can easily be tamed by shooting at it and running away repeatedly until it is knocked out. 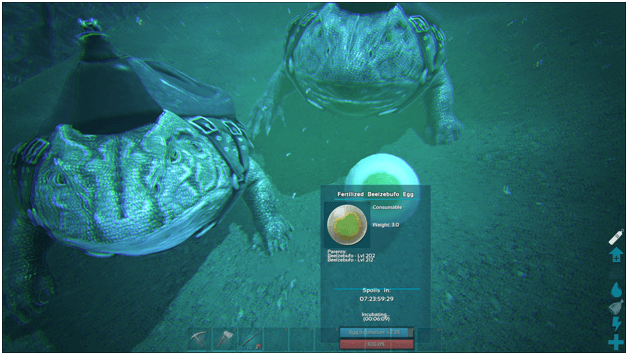 An Beelzebufo will drop a Fertilized Beelzebufo Egg that is a yellowish brown color along with brown spots on it once it has finished mating. 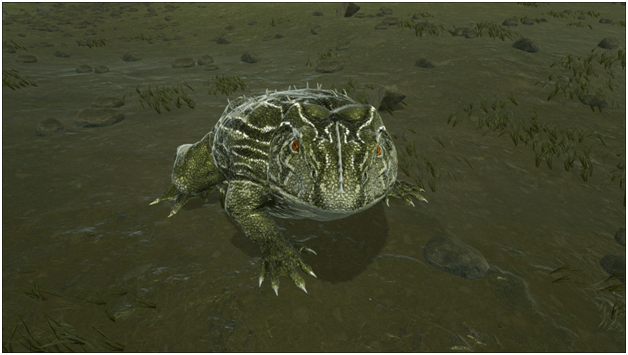 Aberrant Beelzebufo can be found in the Aberration and Valguero maps.

Beelzebufo can usually be found wandering in different locations on different maps, mainly in forests and jungles.

Maps where the Beelzebufo spawns:

The following are spawn maps where the Beelzebufo can be found

Beelzebufo are a good choice for tribes that are in dire need of cementing paste but lack the means to obtain them, especially when there are plenty of spawn locations where insects may appear.

The Beelzebufo’s attacks are incredible strong when dealing torpor and can be used to subdue almost any enemy, including enemy tames which can eventually cause several problems for those that go up against multiple tamed Beelzebufo.

Some tribes leave Beelzebufo on wander in order to take out enemies that wander nearby or to gather cementing paste but these will need to be set on aggressive and may need to be checked from time to time.