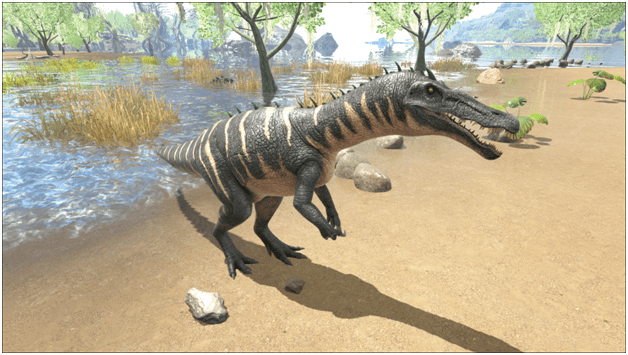 Baryonyx Aquafulgur are piscivores from the late cretaceous period and have an aggressive behavior towards water creature while only sometimes attacking those on land.

A Baryonyx is one of the few creatures around that is efficient in both in the water and on land but slightly prevails more when in the water.

These dinosaurs have a long set of teeth that aid it in hunting under water but also uses it to catch prey on land and if that isn’t scary enough, its movement in the water is seemingly unhindered and it can attack those it catches to an extent where it can even immobilize them.

Humans may not be attacked immediately on land but when in the water, the Baryonyx will make its way towards you to go in for the kill.

Tribes that have tamed a Baryonyx can benefit from its affinity with water, being able to hunt water-dwellers with ease and harvesting their meat with the added bonus of utilizing it for battle due to its prowess when underwater. 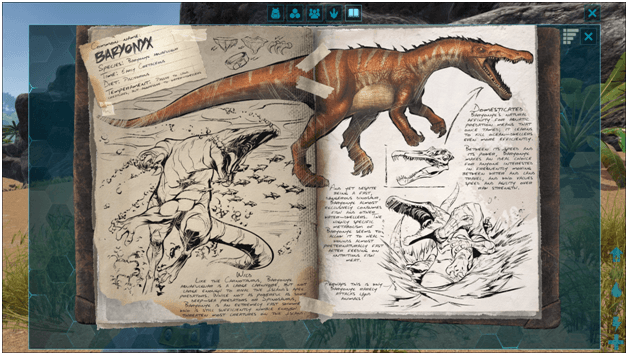 While the Baryonyx is about the same size as other medium sized predators, it is no stronger than most apex predators or powerful sea creatures but has a balance when being on land or in the water.

Even though the Baryonyx would seem to be a carnivore that feeds on all kinds of meat, it actually prefers fish and other creatures from the water and appears to heal quicker after consumption of such prey.

Due to its adept skill in hunting in the water, it has learned to kill creatures that live in the sea or swamps easily and can gather from them efficiently.

Having a good combination of speed and power which it utilizes in the land or water, the Baryonyx is considered a good choice for those who casually travel in both. 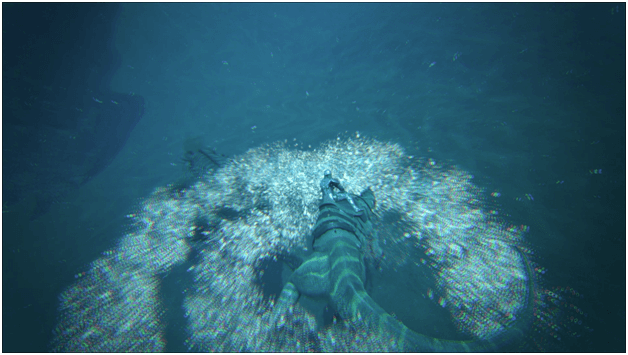 Performs a quick tail spin attack when in the water which stuns enemies and dismounts any nearby enemy survivors from their mount regardless if they are in the water or not as long as the are hit by the attack. 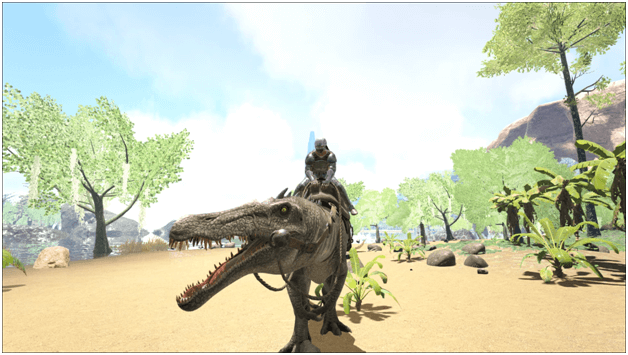 The Baryonyx is capable of performing a taunt which basically doesn’t really do anything but can still bring a few giggles to you, your tribe and even enemy survivors.

Consuming fish meat will allow the Baryonyx to regenerate its health over time.

The Baryonyx is capable of harvesting large amount of meat from underwater creatures and also gives survivors the opportunity of using tools while mounted, allowing them to farm underwater while mounted.

Although the Baryonyx is quick on land, it is even better in the water and this allows survivors to traverse through water easily.

Since players may equip weapons while mounted on the Baryonyx, they can utilize this to fire weapons underwater or tame such creatures with ease.

Being an adept hunter in the water, the Baryonyx is capable of dealing an increased amount of damage towards certain water dwellers.

Utilizing the tail spin attack of the Baryonyx can stun, dismount and slow both wild creatures as well as enemies.

How to Tame Baryonyx? 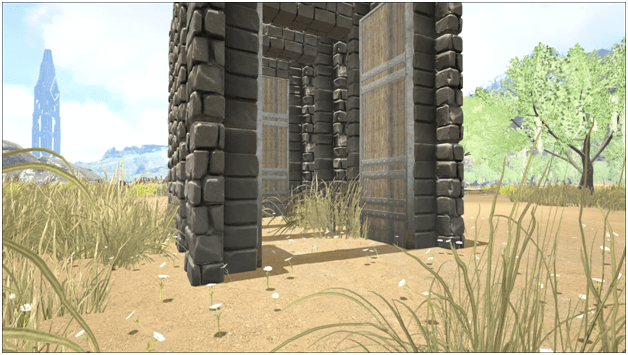 Baryonyx can be quite deadly, especially when they are in the water which makes it wise to lure them out and bring them inside a trap.

A set of gateways with gates on each side can make a suitable trap for the Baryonyx which you can lure inside, allowing you to slip out in the process and close the gate. 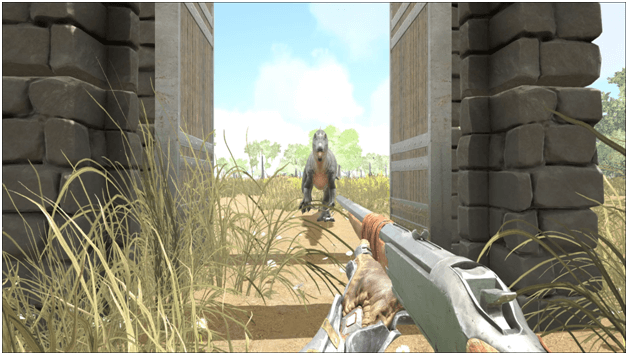 A Baryonyx will run towards you once you have been targeted and will chase you into the trap you have made.

The moment the Baryonyx enters the gateway, slip out the small space between the gateways and head around to close the gate. 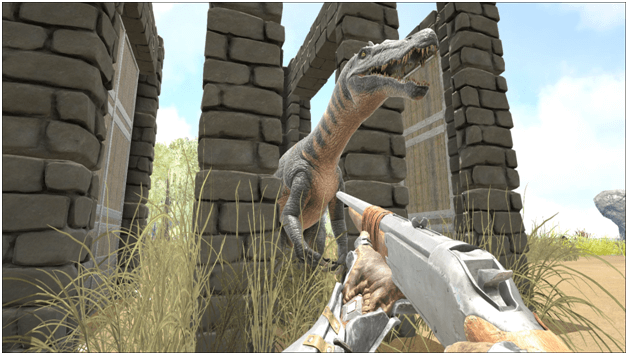 Once the Baryonyx is trapped, you and your tribe will be able to safely tame it but do keep in mind that it will only eat regular kibble or varieties of fish meat. 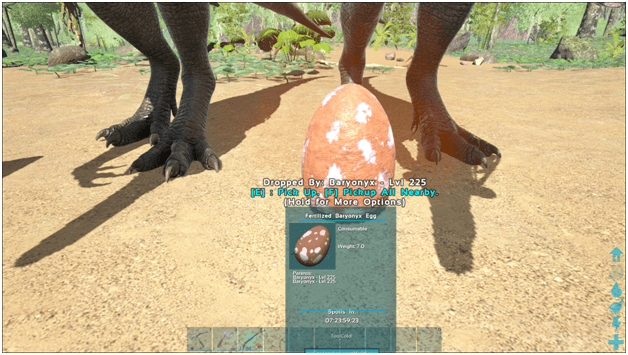 A Fertilized Baryonyx egg is dropped by the female after a pair breed which can be identified by its red color with white spots on it. 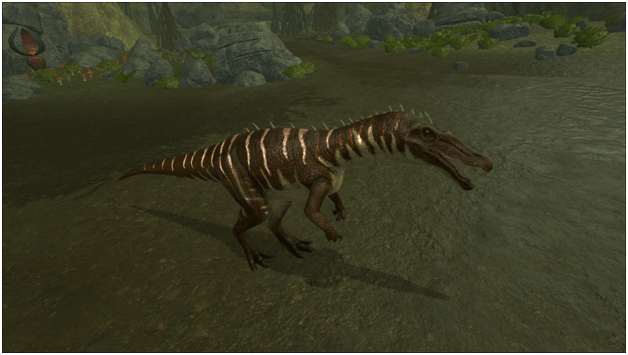 The Aberrant Baryonyx can be located in Aberration and the Valguero maps.

Baryonyx are usually spotted near water where there is fish as they tend to hunt often and come out to wander on land.

Maps where the Baryonyx spawns:

The following are spawn maps where the Baryonyx can be found 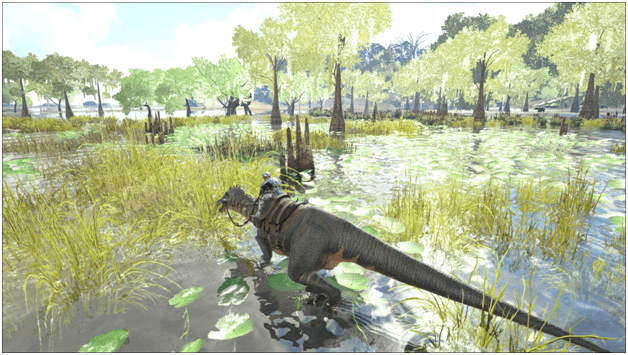 Baryonyx may not be the easiest dinosaurs to tame for beginners but for those that do tame them, the benefits of this all-around mount can prove to be quite beneficial.

When it comes to fighting other creatures, the Baryonyx proves to have its advantages due to its speed and the damage it can deal, especially if the Baryonyx is in the water and able to use its tail spin attack.

Although these may take more effort to tame, the rewards vary depending on how the Baryonyx is used since it can be utilized in both the water and on land to assist tries in several ways.