The Index is a mission on Neptune where players are pit against Corpus units in an Arena-like battle where the teams must kill opponents from the opposing team, collect index points and bank them during the amount of time they have during the match aiming to hit the target points to win resulting in a large sum of credits to be rewarded. 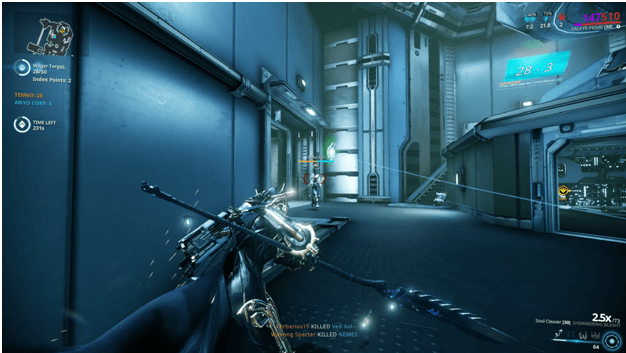 The player first experiences The Index during a mission called The Glast Gambit where the player fight against NefAnyo’s team.

The Index is considerable one of the best and easiest ways to farm credits due to the fact that each match can be finished in around 5-10 minutes depending on the players in regards of skill, builds, team composition and strategy. Players can earn up an average of 300,000 to 1,000,000 credits in around 10 minutes which may vary depending on the gameplay of the player and or their team.

The match begins pitting the Investors (Players in a squadand or AI Specter to substitute if there are no other players available to fill in the slots for the squad members)against the Brokers (Enemy AI of the opposing team consisting of Corpus units that increase in level during the duration of the mission). The objective of the mission is to kill members of the opposing team, collect their index points and to bank them in to score targeting a specific amount of Index Pointswithin a certain amount of time. Failing to do so will result in in either the player’s points being refunded (if time runs out and players have more points than the opposing team) or defeat and loss of initial investment (if time runs out and opposing team has more points than the players).

To begin the mission an investment is required (fee to start the mission depending on mission being low, medium or high risk which must be paid by each of the players joining the mission) which will determine the reward gained on each round. Investment is returned upon winning the match along with the reward determined by which level of risk is chosen. 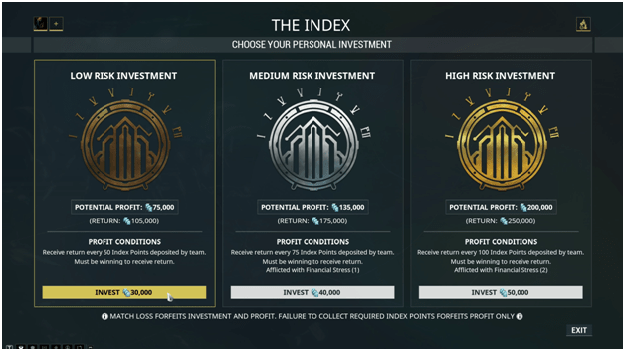 Upon death, players or NPCs (regardless of what team) will drop an index point(visually shown as a glowing green object dropped on the ground) along with any other points they have collected during the match. To collect a point, players or NPCs need simply walk over the index point and it will automatically be picked up and can be seen hovering around the them, thus visually indicating the amount of points either the player or NPCs have. Take note that all points will drop once a player or NPC is killed regardless of the source of damage and can be picked up by anyone. 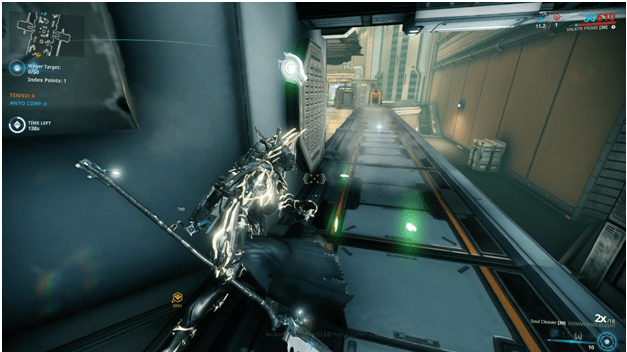 Holding on to multiple index points will give a bonus to the overall score once a player will turn it in. This can be seen on the upper left showing the points the player is currently wielding along with the bonus points they will yield when banked. Bonus points start from a minimum bonus of 2 points while holding 5 index points increasing up to a maximum additional 10 points upon holding 20 index points. Carrying more than 20 points will not increase the bonus beyond 10 points. Upon carrying multiple points, players will be debuffed with Financial Stress (Reduction to max Health and Energy along with energy being drained) depending on the amount of points the player is holding. Once the player has banked their points, the Financial Stress is removed.

Once a player has collected an index point, they may take it to the drop off which is shown by a marker along with any other points they have collected. Upon reaching the marker the player will be teleported back to the starting area of their team as the points are visually removed and added to their overall score. The game timer is increased by 10 seconds per point that the players score to prolong the duration of the match, however when an enemy on the opposing team scores this will deduct 10 seconds per point as well. Turning in points is called Banking. 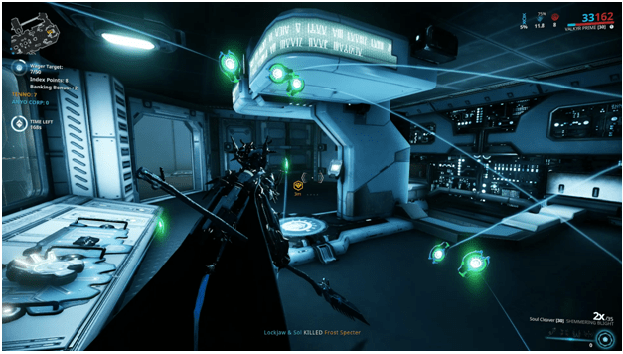 In order to win the match, the investors must be able to reach the intended target of points before time runs out or else the mission may end in a victory with refund (match ends with investors having a higher score but not hitting the target) or defeat (enemy has higher score and time is up). To prevent the timer from going down, the investors must bank in their points as well as prevent the brokers from banking in their points.

Players may choose any Warframe they like to use as long as they own it regardless of the level. However, not all abilities act as they would in normal missions. Some abilities will deal damage but will deal damage and not do their intended effect such as stunning, freezing, burning, etc. It is recommended to try low risk when practicing builds to test out Warframes and their build before deciding to take on higher risks.

Operators may be used during the match and will apply their passive abilities depending on their school. This can be very strategic to avoid death and to move around easier. It is best to choose a school that will aid your current selected Warframe to increase your chances of success.

Primary, Secondary and melee weapons are all allowed to be equipped without restrictions but Companions and Gear are unavailable and will not appear or be accessible during the match.

During the match players may pick up Health and or Energy orbs which replenish the said bar. Enemies will not drop resources and instead have a chance to drop Endo or mods.

Players in the squad participating in the match are called investors this can be noticed during the match as the announcer speaks and makes comments. Investors will be a group of four players, given that there are no players to fill up the slots, Specters (AI controlled NPCs using a random frame) will join the squad. If a player joins, then they will replace the Specter.

Enemies on the opposing team consisting of Corpus units which may include robots, infantry and heavily armored units with high shields and later on an increasing amount of armor. Each of the brokers has their own modification which separates them from their normal ingame counterpart such as skills, weapons and a unique name. During the match multiple units will appear from a selection of four groups all increasing in level as the match lengthens gaining higher stats as creating difficulty for the investors.

There are four groups of Brokers that each contain four different elite Corpus units. Below is the list as well as info:

To know more about the above mentioned brokers click here

Players in The Index won’t be fighting against battalions of enemies therefore just need to focus on taking out enemies one at a time or in small groups. Knowing that the enemies are Corpus units, it would be wise to mod weapons using the following elements:

A combination of Magnetic and Radiation are advised for best results as well as status procs they may inflict.

Depending on your role during the match if you’re on a team or if going solo, it is important to consider what kind of Warframe to use and what build you are going to play with.

Warframes that can take on damage are suggested for running points due to either their defensive stats or abilities. Having a large health or energy pool can guarantee survivability during the process of collecting points and turning them in.

Warframes that can deal a high amount of damage play a big part on taking out enemies for the Banker to collect easily and speed up the match. Having themselves using builds that deal high damage can quickly shred enemies and make gaining points faster.

As in any game there are also support positions available. Using a Warframe to act as support is not always necessary but can be a big help such as using abilities for defense, healing or buffing the team making things easier.

Playing as a Team

It is important for a team to coordinate in missions especially The Index. Having players running around all trying to grab points denies the team of bonus points and can cause tremendous chaos. Playing a role is not always an obligation, but playing as a team is important and knowing what to do and when to do it can change a horrible loss into a great comeback. It is wise to let one or two people collect and let the others deal damage for a quicker match since going free for all can make the match longer.

When playing solo it is important to keep in mind that the Specters will be there, collect points and occasionally die. You need to be sure you have a Warframe that can handle its own in terms of survivability and damage.

Players may use their operators, be sure to equip a school that will benefit your frame or adjust to your gameplay. This can be effective in escaping or setting up an attack. Use everything available to achieve victory.

There is no right or wrong equipment when carrying out The Index matches, as a matter of fact there is no right or wrong equipment for any mission. It all depends on you, your playstyle and what is fun for you. There is no best build and no useless build. However, it is good to make sure that the equipment you choose will suit you on your mission and you know what to do once you begin instead of going in with a random weapon or Warframe and not planning ahead. Strategy and Skill are keys to success in many missions. 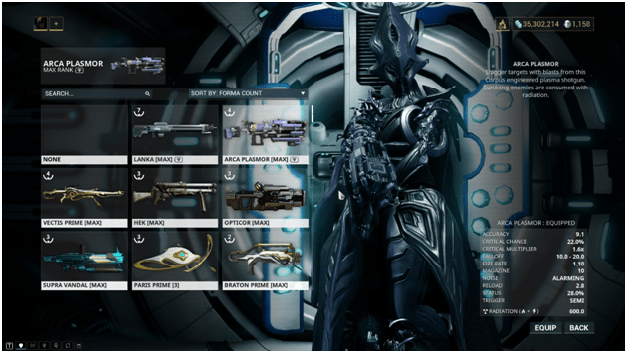 Be sure to use Warframes that may benefit to the current strategy you have in mind as well as the build you make for them. Knowing what to do can be a real time saver and playing out new and different builds can be a lot of fun rather than jumping in with a Warframe equipped with random mods and no strategy which could lead to frustration and worse, defeat.

Make sure to mod your equipment before entering a mission to not only prepare you for the battle ahead but to also make it easier for you to go for the goal. Being set up and ready for any battle can save a lot of time as well as be rewarding in several ways from kills leading to multiple drops to experience gained from excessive kills. 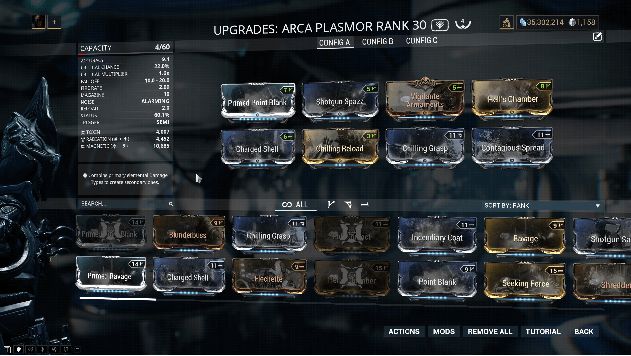 Good Luck Out There Tenno!