If you have been to the Tangled Shore, you might have come across Spider already in his hideout, but in case you have not, he’s quite easy to find.

Spider offers a lot of bounties that can provide you with useful rewards such as XP, Glimmer, and even Enhancement Cores depending on which bounty you take.

While most think Ghost Fragments are not that easy to obtain, you can easily farm a good amount of them to acquire all the bounties you need for farming other items.

Where to Get Ghost Fragments?

Ghost Fragments are a currency that you can obtain by doing activities on the Tangled Shore and are limited to only that location.

You will need to participate in the activities that are found on the Tangled Shore for a chance to obtain Ghost Fragments.

How to Get Ghost Fragments?

There are activities such as patrols, public events, and Lost Sectors that you can complete for a chance to get Ghost Fragments.

Patrols are one of the fastest ways to obtain Ghost Fragments and since there are many lying around, you can obtain several in an hour or less.

Public Events can reward a bit more than Ghost Fragments but may be time-consuming while Lost Sectors seldom give them. 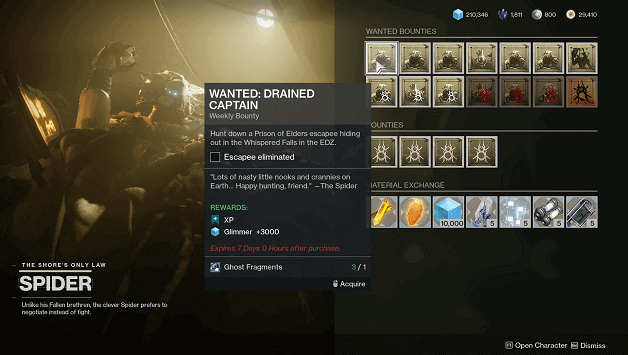 Ghost Fragments are mainly used to obtain bounties from Spider, allowing you to choose certain ones which may vary in cost.

Each bounty has specific rewards, some may have the same while higher-tier ones may offer more such as Enhancements Cores.

Some of the most valuable resources in the game may be farmed from such bounties and can prove useful later on when you want to do some upgrading.

Ghost Fragments can only be stored at a maximum of 20 pieces in your inventory but this is more than enough to get a whole set of bounties.

It is best to obtain as many bounties as you can or just the important ones before farming Ghost Fragments so the rest do not go to waste.