PVP is a great way for players to let off some steam and earn some pretty good rewards, especially when such rewards improve your character.

The Iron Banner Token is an uncommon redeemable which allows you to increase your reputation with Lord Saladin.

Where to Get Iron Banner Tokens?

Aside from this, you can obtain them through bounties which can be picked up from Lord Saladin at the Tower.

How to Get Iron Banner Tokens?

Iron Banner Tokens are rewarded when you participate in the Iron Banner event which is a monthly PVP event when it is active, which is available once a month during the first reset week.

The Iron Banner is an alternate Crucible playlist that rewards players with unique items and is mostly fixed in certain ways, requiring players to get used to it. 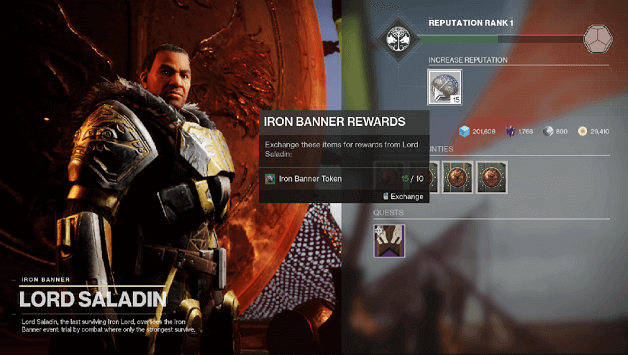 Iron Banner Tokens are redeemable items that can be exchanged once you open up Lord Saladin’s interface, showing what he has to offer.

As your reputation with Lord Saladin increases, you will gain reputation ranks which reward you with an Iron Engram every time the level goes up.

You can obtain several different items this way that are not available through farming or any other means of gear acquisition.

Turning in Iron Banner Tokens is available during the Iron Banner event and will increase your level for every 20 tokens that you exchange.