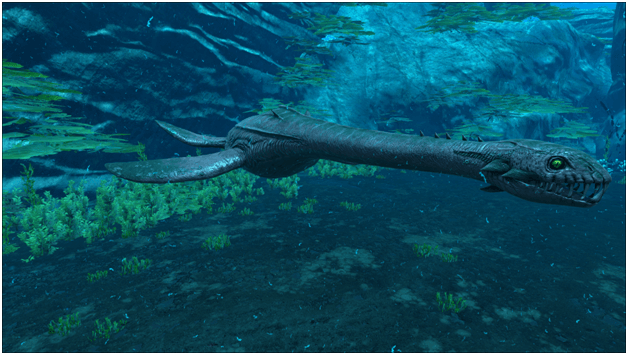 The Elasmosaurus Remuspissa is a carnivorous underwater creature that was first seen during the late Cretaceous period and has a very aggressive temperament.

This creature has a long neck and a mouth full of sharp teeth that allows it to accurately take large bites at its prey when on the hunt.

These creatures are usually found swimming around in the deeper parts of the ocean where survivors fear to venture, chasing after prey that it can sink its teeth into.

Humans and their tames are most likely to be attacked by these creatures the moment they head to deep as Plesiosaur will immediately chase after them even if they are far away.

Tribes that have been able to tame Plesiosaur utilize such creatures for their speed and ability to deal damage underwater along with the benefit of building structures on its back. 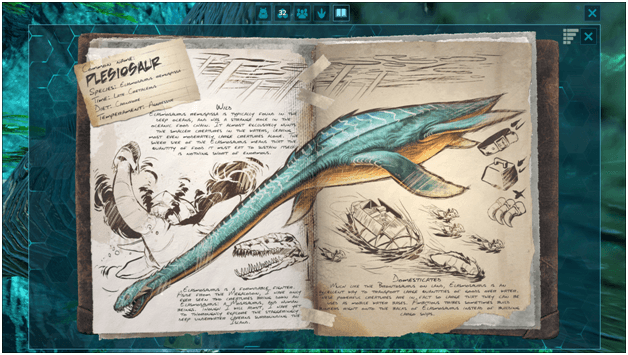 Plesiosaur roam the deeper parts of the ocean, hunting for smaller creatures which it can easily chase after in order to sustain their large bodies.

These creatures are capable of fighting against many of the underwater creatures that exist in the Ark and are formidable when engaging in underwater battles with other tribes.

Its large body allows those that have domesticated it to build structures which work as mobile underwater homes to store goods, making it an excellent all round tame.

Tribes may utilize having a platform saddle equipped so that structures may be built on its back to serve as a portable underwater home.

Due to its large amount of health, the Plesiosaur can withstand a significantly larger amount of damage unlike most underwater creatures.

With its powerful bite and fast attack speed, the Plesiosaur is capable of delivering a large amount of damage in mere seconds.

Being a large creature as it is, the Plesiosaur can handle a substantial amount of weight and make transporting items or resources from one place to another quite easy for a tribe.

The Plesiosaur is a fast swimmer and can be used to get around quickly underwater which makes it a good choice for scouting the depths.

How to Tame Plesiosaur? 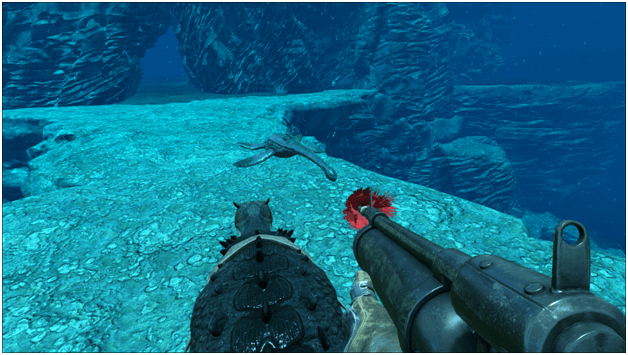 Plesiosaur can do a large amount of damage, its best to have a mount which can swim underwater such as a Sarco which you can shoot from while taming the Plesiosaur.

Making a trap consisting of behemoth gates is possible but its much easier to have a mount and fire straight from its back to speed up the taming. 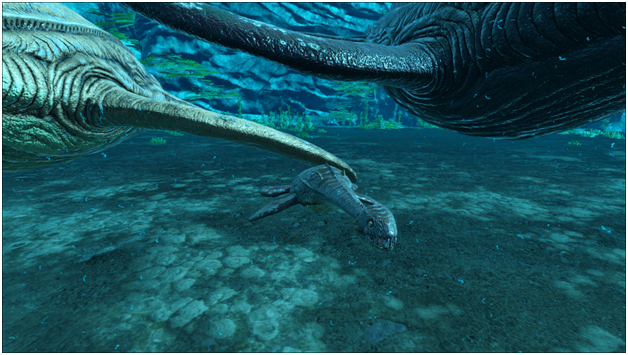 Although Plesiosaur are considered to be reptiles, when two of them mate, the female will gestate and later on give birth to a Baby Plesiosaur.

Plesiosaur are commonly found in the deeper parts of oceans surrounding the Ark.

Maps where the Plesiosaur spawns:

The following are spawn maps where the Plesiosaur can be found 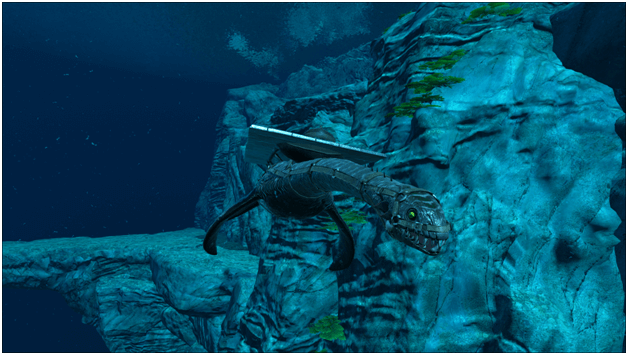 Plesiosaurs are very versatile water creatures and can help those who travel in the water in several ways which makes them worth the effort to tame.

Most survivors have trouble fighting wild Plesiosaur because of their high targeting range, being very aggressive and aiming to kill their prey as soon as possible which makes them even deadlier once tamed.

While the Plesiosaur does not have the highest amount of health, they are very fast and can do a lot of damage along with being a good mobile base for survivors on the go.