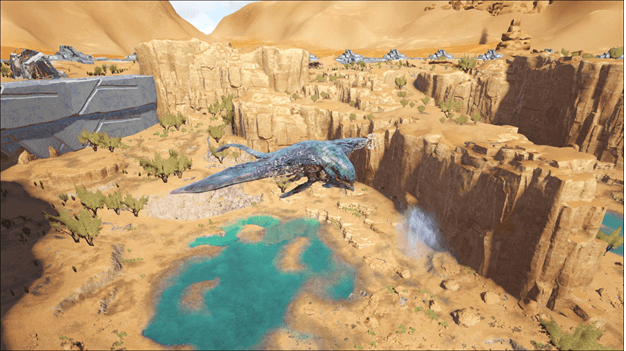 This boss is a large flying creature that flies around the Desert Biome, capable of causing lightning strikes to hit its enemies and can send out flocks to defend itself.

Since the Desert Titan does not land, you will need to utilize flying creatures as others would fall off or not even be able to land on the boss.

How to Summon Desert Titan?

The Desert Titan can be summoned by heading into the Desert Cave (87.4 – 70.4) and heading for the terminal within to use the tributes.

There is only one variant of the Desert Titan, no other difficulties for this boss will be summoned aside from the default one.

The Desert Titan attacks by summoning Desert Titan Flocks that chase and attack, possibly dismounting you, making it dangerous if you do not have ways to safely fly or slow your fall speed.

Another attack of the Desert Titan is the use of its lightning strikes, which will target where you are, allowing you to escape before getting hit.

Flyers are the best way to fight the Desert Titan as it does not land and will continue to fly around where it spawns.

Using a few or several Argentavis may make killing the Desert Titan easy or you can always resort to Wyverns to deal high amounts of damage.

You can land on its back and use weapons but you should still watch out for the flocks and the lightning that may kill you.

Watch out for melee “slap” attacks that the Desert Titan may do which may cause you to fall off or may hit you when you are on foot. 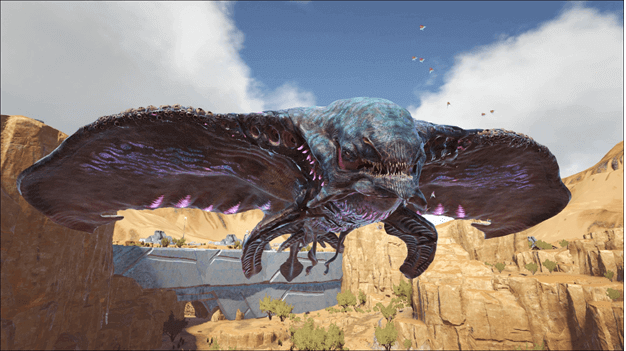 The Desert Titan appears as a large reptilian creature with traits similar to a Manta that continuously flies around due to some kind of corrupted power.

The Desert Titan can drop many rewards, many of them are selected at random and include the following:

How to Tame Desert Titan?

To tame the Desert Titan, you will need to get on its back and force it to use lightning strikes on the nodes on its wings and tail.

Once lightning has struck the nodes, you can start dealing damage to them to reduce the health of the Desert Titan.

When enough damage has been dealt with the Desert Titan, you will be able to claim it as it floats idly and once you do this, it will automatically be equipped with a saddle.