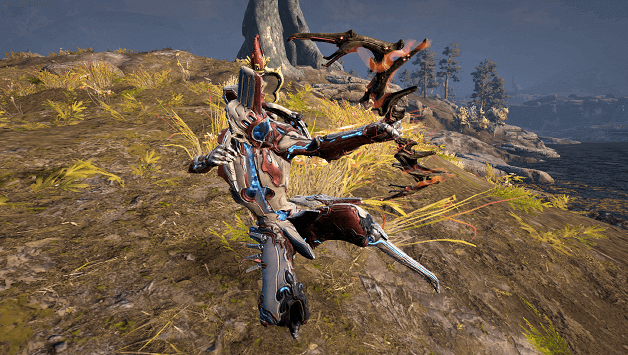 The New War did not only introduce a whole new part of the story with Warframe it also gave us a lot of new goodies to use as we continue playing.

Some of these items may already be obtained if you have completed The New War quest but others may require a bit of grinding to get.

Nevertheless, getting your hands on all of these items is not only good for your collection but some of the new items are pretty good and are worth the effort.

You may have already known about Caliban due to one of the previous devstreams where he was showcased.

Known as the Sentient Warframe, Caliban is capable of summoning his own Sentients to fight alongside him (Lethal Progeny), boosting his shields in the process.

Caliban has a passive Adaptation ability which also affects his allies, so this guy is pretty good on his own or with a group, capable of improving everyone’s survivability.

He has the ability to become a spinning vortex of death (Razor Gyre) and when you use it along with his disable ability (Sentient Wrath), you can deal even more damage.

When you want to go full-on chaos, his Fusion Strike ability creates two beams spread out wide which focus in the center, causing a blast afterward, talk about mayhem!

Completing The New War alone already grants you some goodies as these are the weapons that you use during the quest (which you obtain – no spoilers) and others you can later on farm.

These are some of the rewards, mainly weapons that are given to you after completing The New War quest.

These are the weapons that you can obtain from the Narmer Bounties which become available in Cetus (Plains of Eidolon) or Fortuna (Orb Vallis) once you complete The New War.

The Venato, also known as Caliban’s Signature Weapon is a Sentient scythe that grants Caliban a 50% chance to gain additional melee combo points when fighting.

To get this weapon, you will need to have it researched in the Tenno Lab in your dojo to replicate its blueprint.

There are 3 Archons that you face during The New War quest and they each have a set of Archon Mods which you can, later on, obtain from Narmer Bounties.

Each of the Archon Mod Sets has different bonuses and can alter some of your builds for more unique and even better gameplay.

The Archon Mod Sets available from Narmer Bounties include:

How To Get The New War Weapons?

Aside from the weapons rewarded for completing The New War quest, their rest can easily be obtained from Narmer Bounties.

This does not include the Venato as it is researched and replicated from the dojo but the Archon weapons all can be obtained from Narmer Bounties.

Every time there is a cycle (same bounty appearing once on Cetus and once on Orb Vallis) the reward table will change, making it important to check the rewards first.

If you miss out on a bounty on Cetus, it will be the next one that appears on Orb Vallis, followed with a new set once a new bounty appears on Cetus.

During the day on Cetus a Narmer bounty will be available but at night, Fortuna will have a bounty.

Pretty much the only new and slightly important resource that you can get from The New War update is the Narmer Isoplast but there has also been a new use for the Anomaly Shard too.

Other Rewards from The New War Quest

A lot of goodies come along with The New War and most of them are weapons, which means there are dozens of builds that you can start making, especially with the different specialties.

The Archon weapons are sure to impress anyone and those who are creative enough to look past any difficulties in making builds will surely end up with unique and creative ways to dish out damage.

One of the best things about The New War items is that all of them can be farmed by doing the same thing, so you are bound to get everything one way or another.