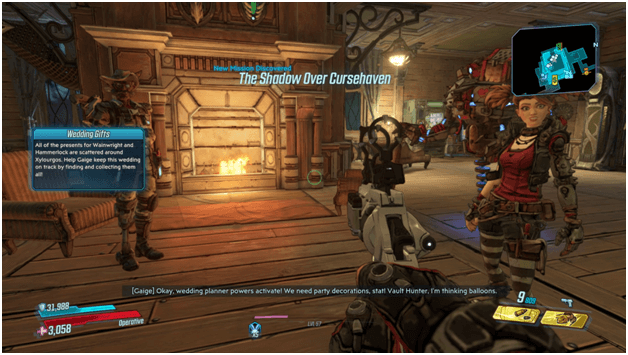 After arriving at The Lodge to meet up with everyone for the wedding of Wainwright and Hammerlock, Gaige asks you to help her set up the place but Wainwright later on needs your help with something else.

Wainwright needs your help with something and he will contact you and ask you to keep it a secret, resulting in you heading out after him while everyone is minding the wedding preparations. 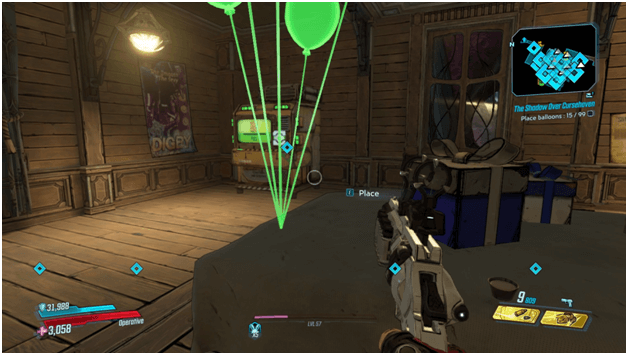 After you finished the The Party Out Of Space mission, this mission will begin and Gaige will ask you to help her set up some decorations for the party but don’t worry you do not have to put up all of them regardless if it has a counter reaching 99 balloons placed. 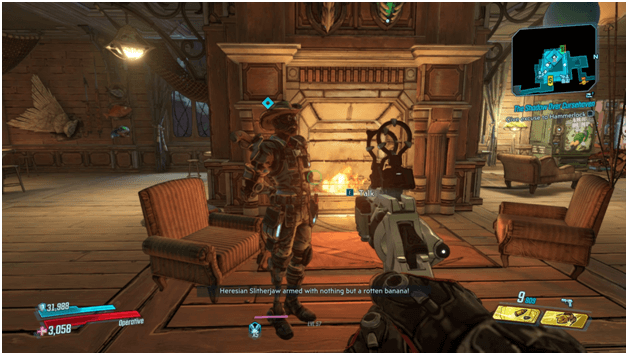 Wainwright will contact you while you are placing the balloons and will ask you to go to him in town but to first make up an excuse to tell Hammerlock.

Head over to Hammerlock after Wainwright contacts you and talk with him to give him an excuse and continue. 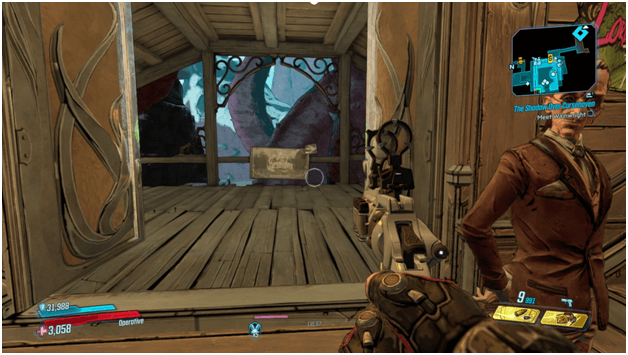 Once you have given Hammerlock an excuse, the door at the side of The Lodge that leads to another gondola will now be open. 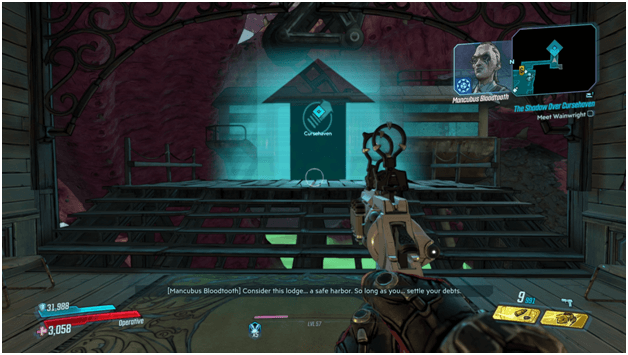 Head outside of The Lodge and make your way to the gondola so you can use it to get to the city where Wainwright will be waiting. 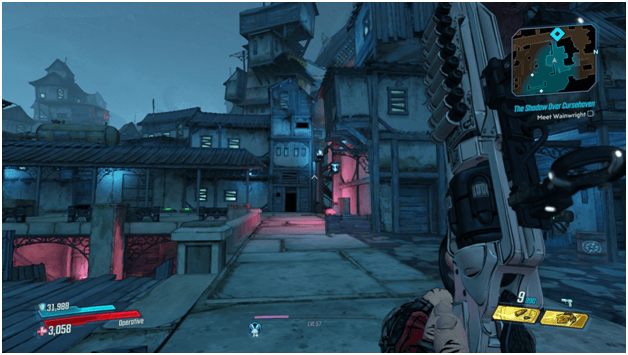 Once the gondola has brought you to the town, make your way towards the waypoint that depicts where Wainwright is located. 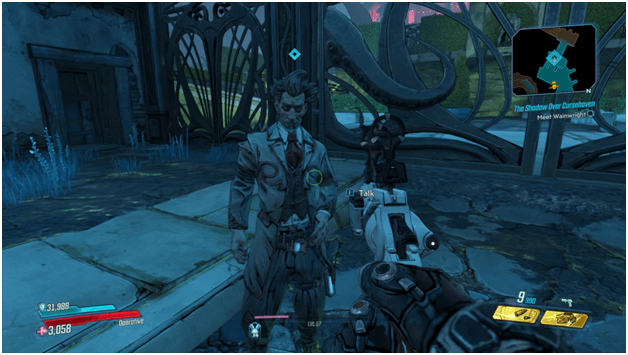 Wainwright will be waiting by a large gate and apparently wants to take a peak into the venue but since it is locked, the two of you will need to find another way. 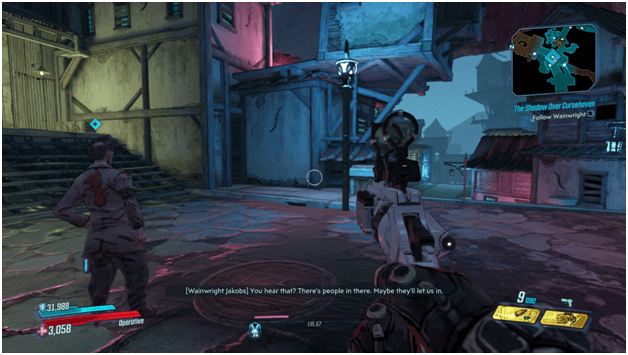 Wainwright will decide to look in town to see if there is another way to get through since the gate is currently unpassable and the two of you end up heading into town and finding an underground passage. 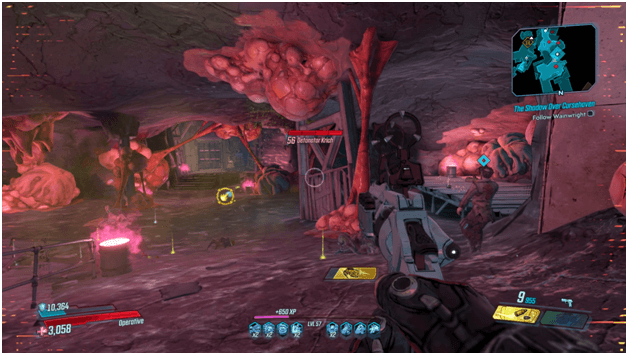 The passage is full of infestation and creatures that you and Wainwright will fight through as you push forward through the underground passage.

Upon reaching the end, there will be a console that Wainwright will destroy to open up a large gate that is blocking your path. 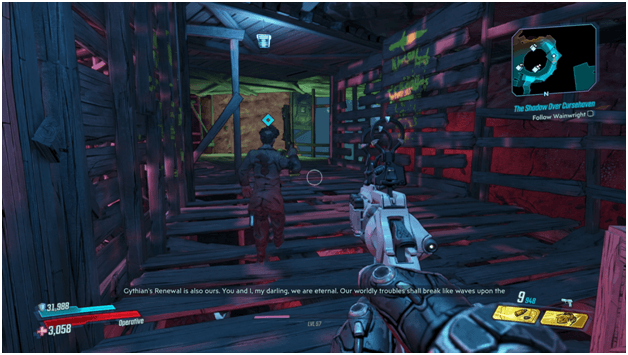 Follow Wainwright through the path that has opened up until you find yourselves in front of another locked gate. 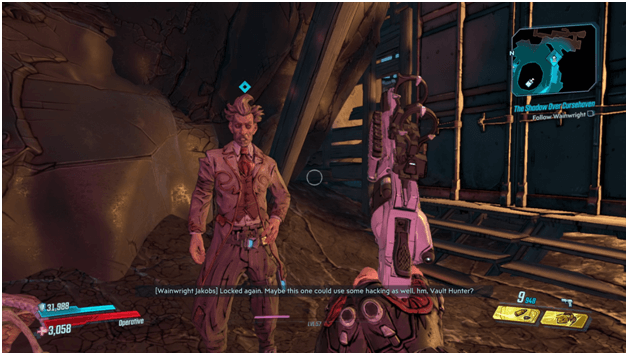 Wainwright will pause and ask you to find a way to get inside, referring to also destroying a console that might be nearby. 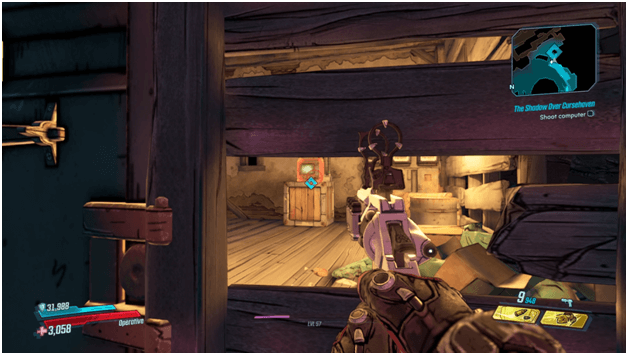 Take a peek through the wooden boards that the gate is next to, and shoot at the console that is visible and marked by a waypoint to open up the gate. 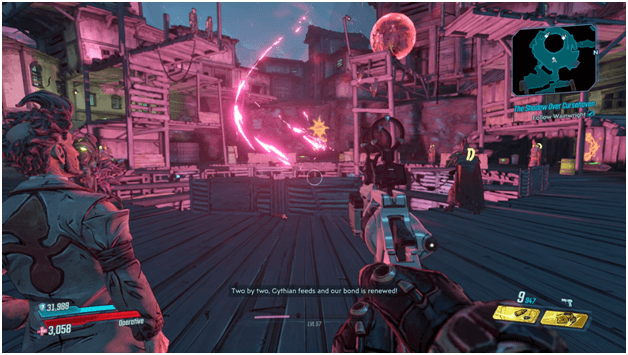 You and Wainwright will bear witness to what appears to be a sacrificial ritual where people are being tossed into a pit.
This shocks Wainwright and forces him to call out to what seems to be a couple that is tossing people into the pit. 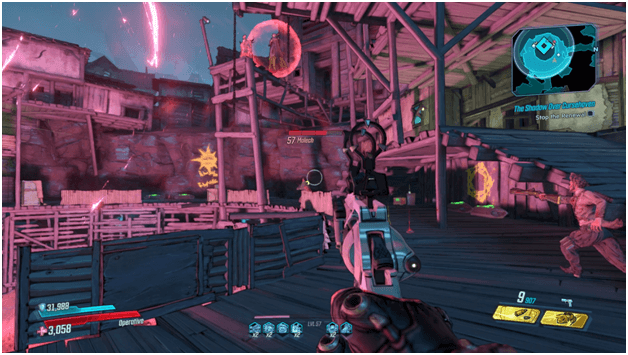 As you both are noticed, the couple who are later identified as Vincent and Eleanor will send their followers to attack and you and Wainwright will end up having to fight them off. 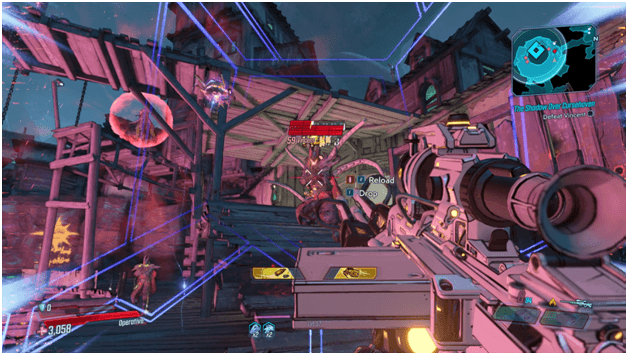 During the fight, Wainwright will taunt the couple and Vincent will descend to attack which ends up with you and Wainwright defeating him. 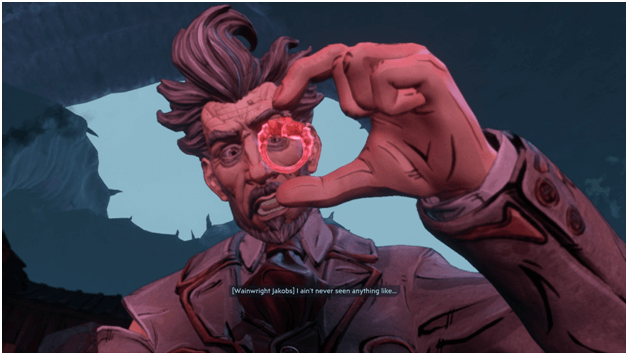 Once Vincent is defeated, a cutscene will play and Wainwright will pick up a ring dropped by Vincent, later on ending in the ring having an effect on him. 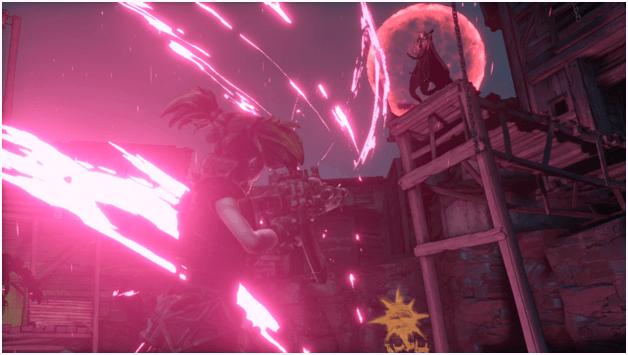 Gaige will appear in the cutscene and later on the four of you will end up retreating back to The Lodge along with Wainwright who is unconscious and carried by Deathtrap. 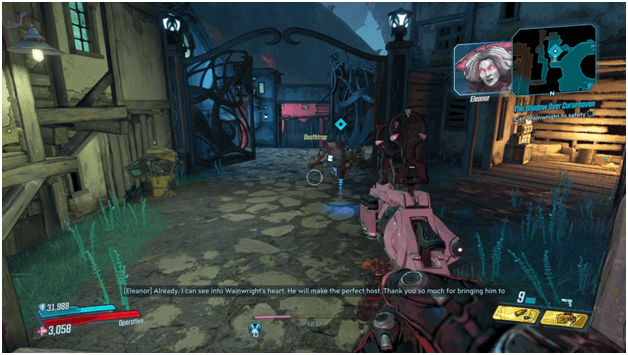 Follow Gaige and Deathtrap as they head back to the gondola in an attempt to return to The Lodge with Wainwright still unconscious. 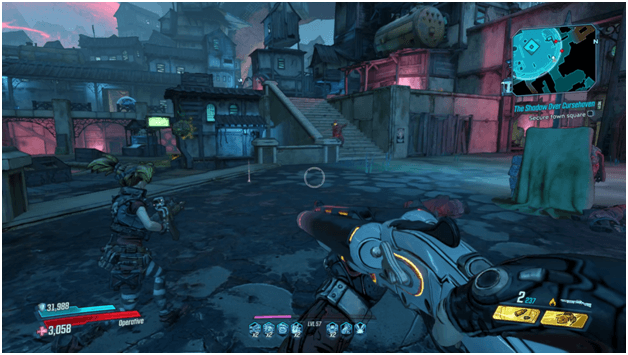 On your way to the gondola, more cultists will arrive and attempt to stop you from reaching the gondola and you will need to secure the town square before continuing with your retreat. 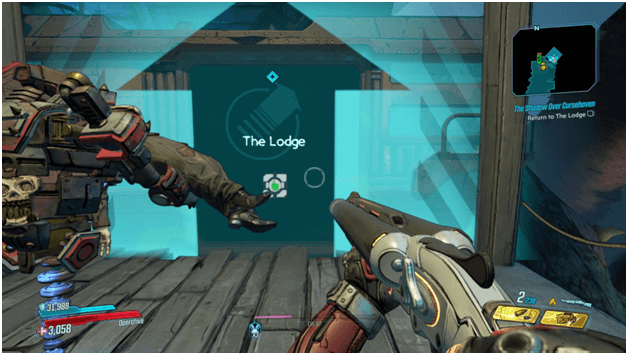 Continue to follow Gaige until you reach the gondola and take it back to The Lodge so you can meet up with everyone there. 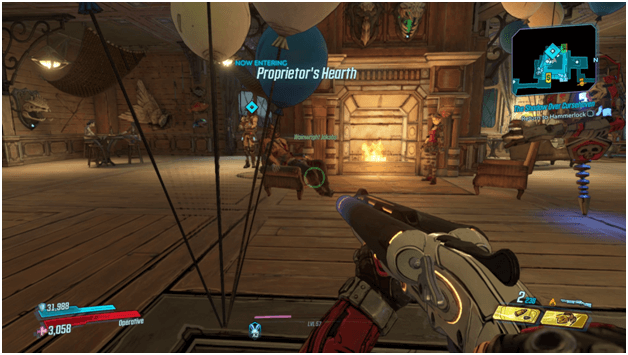 Once you arrive at The Lodge, Wainwright will already be sitting down and you will then approach the group as they are all checking up on him. 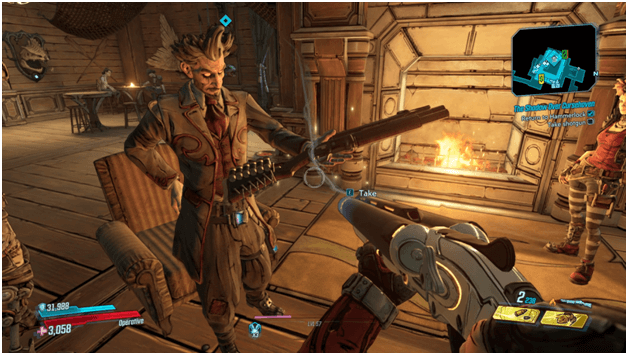 As Wainwright regains his consciousness, he will ask you to hold on to his gun for him as he is not himself at the moment.

Take the gun from him in order to complete the mission.

The Shadow Over Cursehaven Rewards 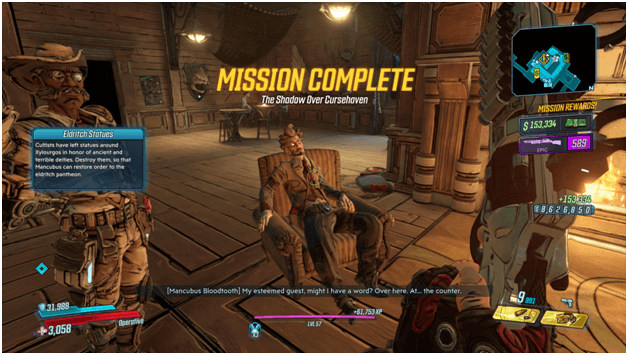 Completing The Shadow Over Cursehaven will reward you with 153,334 cash and the “The Cure” epic shotgun.

After completing this mission, the mission called The Case of Wainwright Jakobs will start. 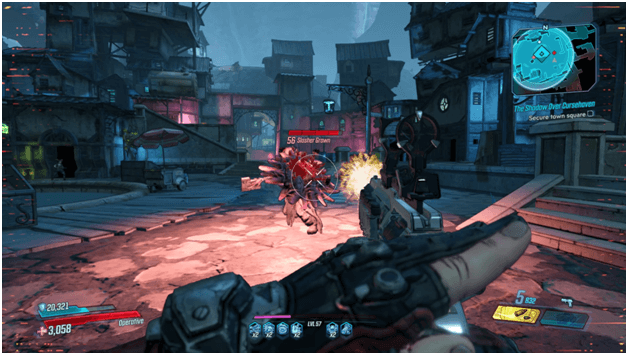