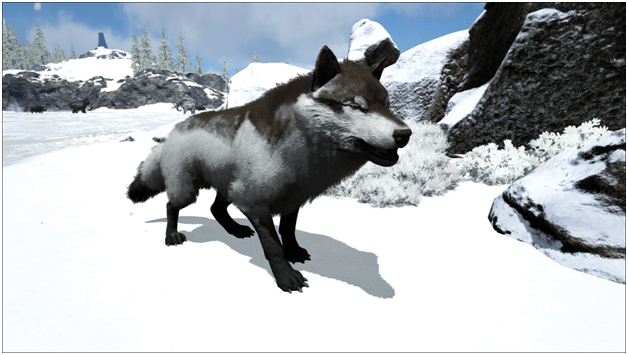 Direwolves for my tastes are the starter mount of choice since they do not need a saddle to be mounted after being tamed.

Getting them and making your wolf pack for added protection in resource runs or riding the alpha with its pack into battle against the dangerous things of the land. I would say that the dire wolf and its pack is a survivor’s best friend.

Hunting these animals for Pelt or Capturing them is quite a task but not too difficult for the average survivor.

Be wary though meeting one when gathering resources is a problem because when you see one its pack will not be far so take utmost care survivor when approaching these beasts.

They are territorial and will attack you once your presence is detected, resulting with it along with any nearby members of its pack to chase you indefinitely unless you find a way to escape. 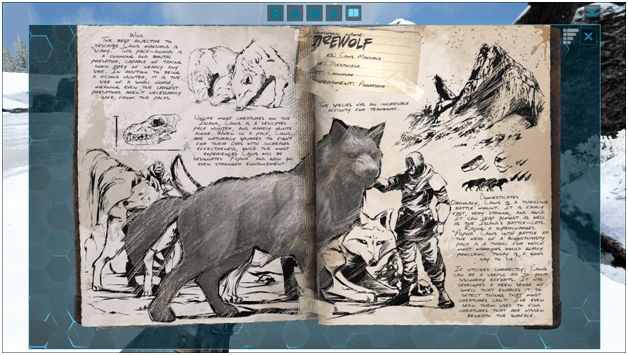 In the dossier, Direwolves are described as scary which is not only because of its incredible size but also its capability to take down larger creatures, especially when in a pack.
Direwolves will rarely be seen hunting without a pack as they are more effective in a group and when there is an appointed alpha, the pack appears to have a boost in morale.

With a combination of strength and agility, the Direwolf is one of the best battle mounts there are and along with its ability to jump, these creatures can chase down any prey in sight.

Direwolves have keen senses, allowing them not only to detect enemies hidden from plain sight but also to track down the wounded, making it almost impossible for its prey to escape. 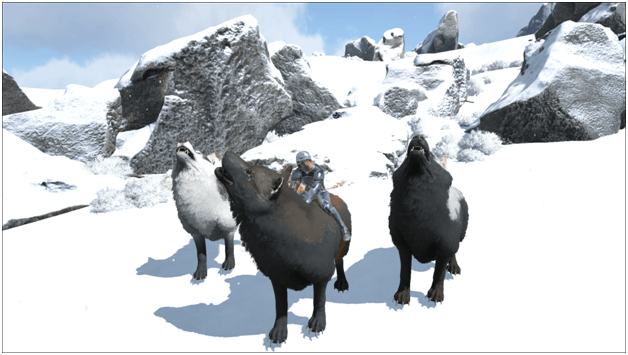 When there are two or more Direwolves, the alpha (highest level Direwolf in pack) may use This ability to grant all pack members a 50% damage boost and 25% damage reduction. 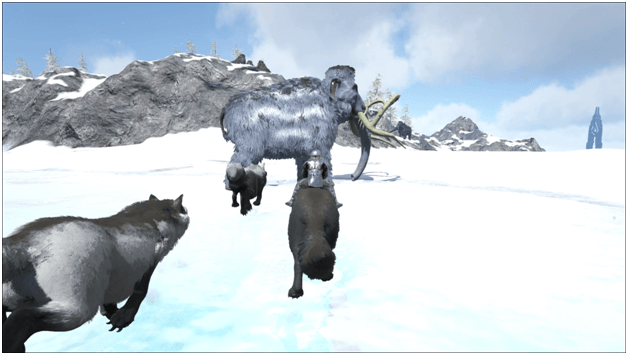 Direwolves have strength in numbers and gain a boost when there are other nearby which gives them 5% bonus damage for every other Direwolf nearby.

This stacks up to a maximum of four while having at least 2 or more Direwolves appoints the stronger one as the alpha, granting it the usage of its Howl ability. 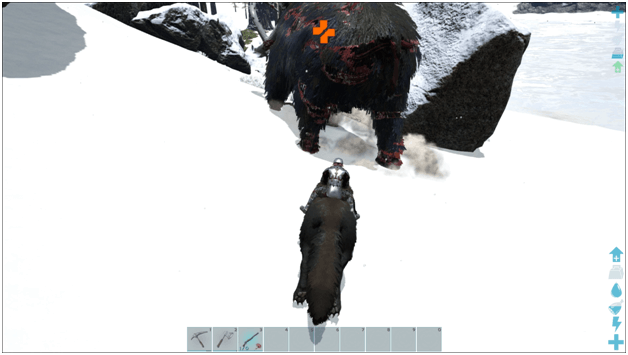 The Direwolf is capable of sensing when an enemy is near death and will be able to detect the percentage of health that enemies or wild creatures have.

Health percentage is shown by an indicator which transitions from yellow to red with yellow indicating around half health and red indicating near death.

A white cross shows that a target is deceased and can aid in finding bodies of enemies.

Direwolves have incredible speed and agility, making them excellent tames when travelling on land along with their ability to jump over obstacles.

The direwolf leader can buff it’s pack while the survivor can give commands to the other members of the pack.

Being pack hunters, Direwolves together can easily take down enemies that are even larger than their own size and along with the buff provided by the alpha, they can make quick work of their enemies.

Their keen senses allow them to detect enemies that are mortally wounded, allowing its tribe to easily locate any stragglers that remain after a battle or help when hunting down certain prey.

How to Tame Direwolf? 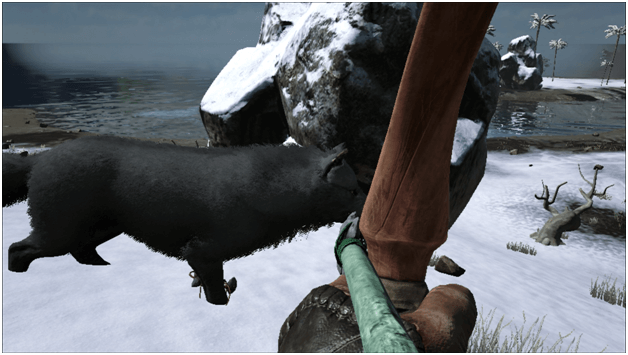 Direwolves can be immobilized with bolas and knocked out with tranquilizing weapons or even a club to knock them out but be sure to remember to hit the wolf from the sides or the back because it will still attempt to bite you if it is given the chance. 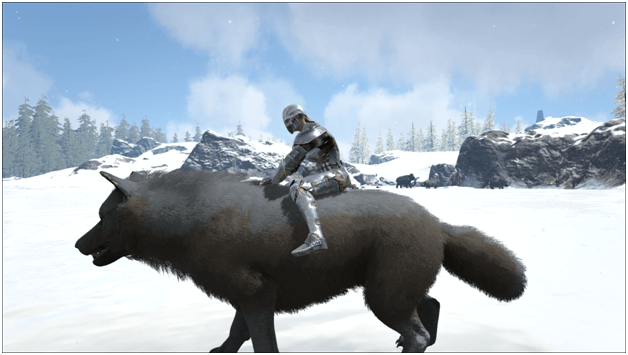 The Direwolf does not require a saddle may be ridden right away after being tamed which also makes it a great starting tame since no additional resources are required to craft a saddle. 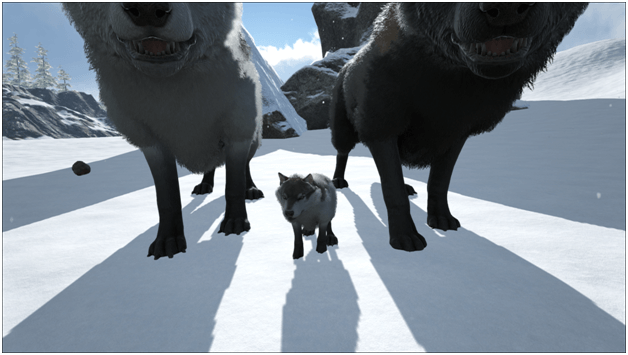 Direwolves are mammals and the female will gestate after mating before giving birth to a baby Direwolf.

Most Direwolves can be found roaming in packs around snowy mountains and other cold places where the temperature is low.

The following are spawn maps where the Direwolf can be found 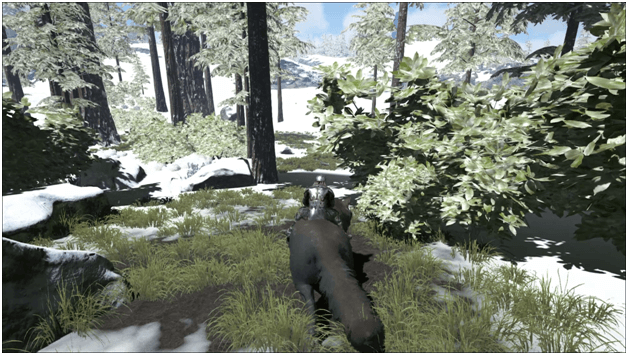 Tribes may gain an early advantage of having Direwolves tamed due to their versatility and strength in numbers when multiple have been domesticated.

They are moderately difficult to tame since one of them alone can be quite challenging while a whole pack can turn things around and end up with the demise of those attempting to tame them.

Direwolves are capable of protecting a tribe, especially during the early stages where they have just begun to settle into a new base or when they are exploring.

You can’t go wrong with multiple of these creatures tamed as they are considered one of the best early mounts if the survivor can handle taming them.

Breeding them to make a strong bloodline for your tribe comes in handy later on as they can defend your base from predators or serve as a deterrent for unwanted guests.