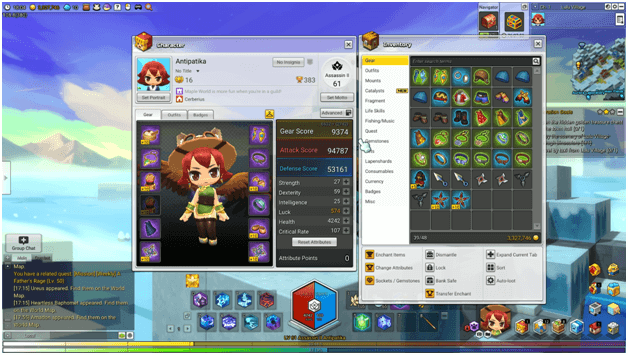 As you progress through MapleStory 2, you’ll find that eventually you will need higher gear that can help you conquer your enemies and move on throughout the story and face tougher challenges in the game.

Getting higher gear mean getting gear that has a better rarity which is categorized as normal, rare, exceptional, epic and legendary.

The higher the rarity, the higher the stats of the gear and along with the rarity, enchanting the gear makes it more proficient and gives you a better edge and helps improve the overall performance you character has.

Gear Score is a requirement when entering certain dungeons where you may go to find higher gear so progressing to getting endgame gear takes a step by step approach where you reach the right gear score levels before getting the best equipment. 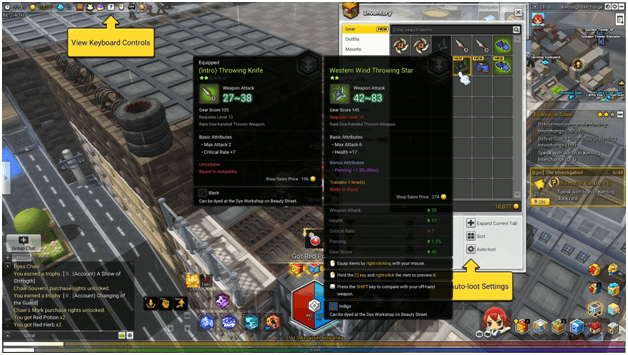 When leveling up from 1 to level 50 you will come across missions which will give you gear that helps you as you level up.

These different kinds of gear make easy additions to your equipment so that you can easily do the following missions required for you to progress throughout the story.

You will either pick up gear from defeating enemies or receive them as rewards from missions or from doing dungeons that you need to go through as you progress with the main quest. 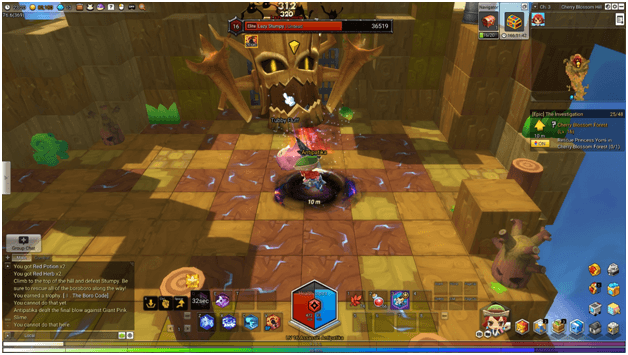 Normal Dungeons are required to be finished as you progress when doing your quests and these can reward you with different gear at the end of each dungeon.

This is however not considered worth farming for most players as these are relatively low when it comes to level so people usually do not grind dungeons repeatedly when leveling from level 1 to 50. 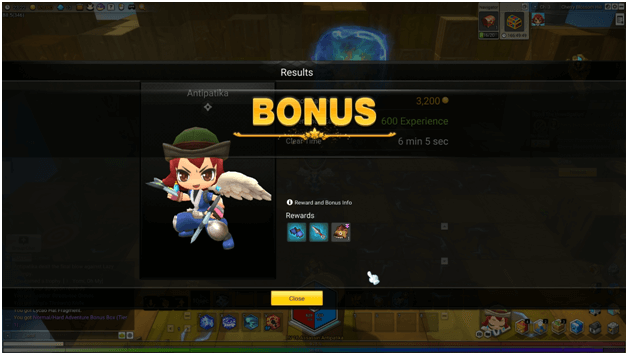 You can still farm these dungeons if you want to get a good amount of gear or increase your gear score as you proceed but by the time you do this, your character may already have a higher level than the gear that is provided.

Instead you may farm a certain dungeon once you reach level 50 as this is the point where going to level 60 becomes a bit challenging for most players, especially if you plan on fighting world bosses or killing mobs for experience. 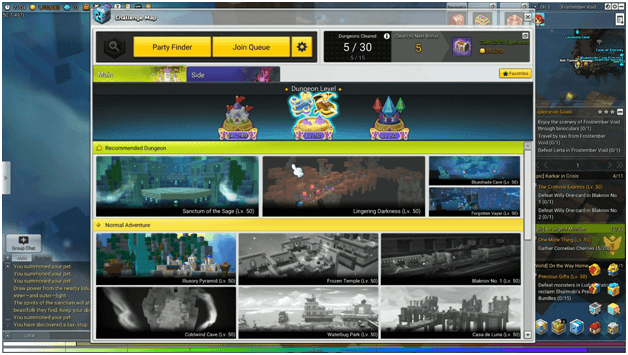 As your level progresses you will be able to do certain challenge maps or dungeons where you can get higher gear for you to use when you progress with the story and level up.

Some of these dungeons are easier if you have a party but doing them solo is still viable as they are still somewhat easy for the most basic of gear.

From here on you can farm the gear you need that you will use until you reach level 60 but if you do not feel like farming, you may stick with traditional leveling methods such as farming, fishing, playing music and exploring as these do not require strong gear. 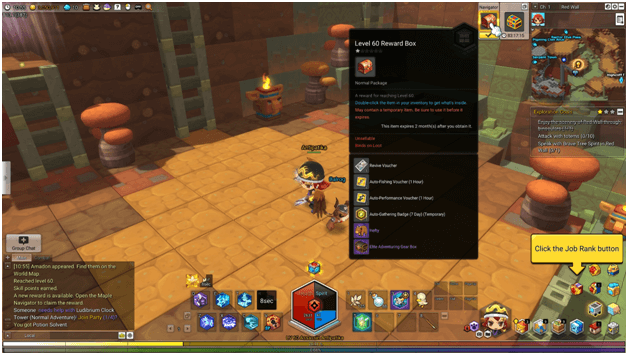 Reaching level 60 is pretty much a turning point in the game as this is where you get to your second job rank as well as receive an Elite Adventuring Gear Box which contains epic gear and +10 enchanted equipment for you to use.

Once you hit level 60 you get this reward from the navigator reward box and may use it while making your way to level 70, taking along other challenges on the way. 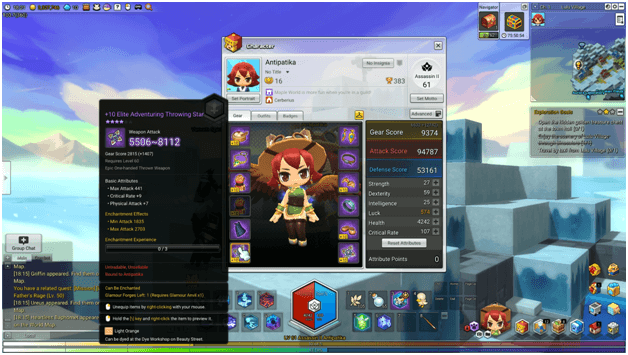 This will pretty be your gear until you can handle the higher dungeons and this will help you pass the gear score required for entering the other hard dungeons that you will need to head to upgrade your gear. 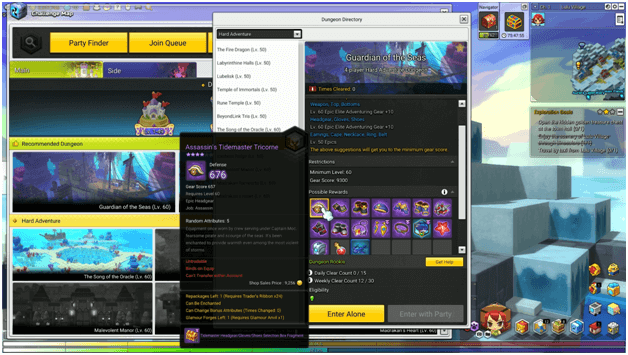 Once you equip the epic gear from the navigator rewards, you are recommended to hunt for the next set of gear for you character which is located in the next dungeons that your gear score allows you to enter.

If you just reached 60 then most likely your choices are The Song Of The Oracle or Guardian Of The Seas hard dungeons which will drop better gear that you may then equip once you have acquired them.

Your next step is to get your gear score to 10,000 so you may proceed with the dungeons that follow which are capable of dropping even stronger gear. 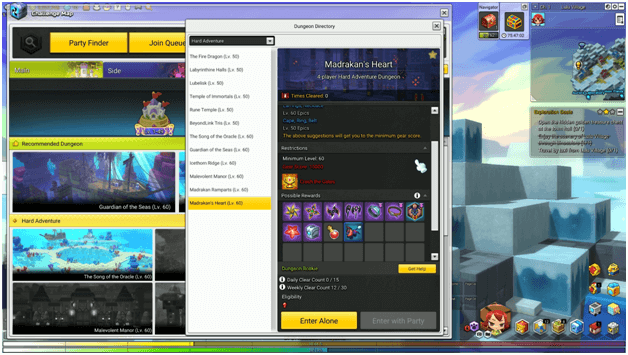 Once you have a gear score of 10,000 by upgrading your gear from farming the dungeons and enchanting your gear, you will be able to access Malevolent Manor, Madrakan Ramparts and Madrakan’s Heart which drop the higher stat epic equipment. 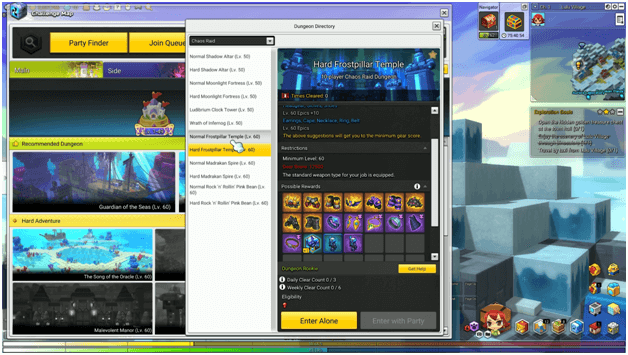 Your next step is to reach a gear score of 12,500 so you can finally access chaos raids which are dungeons that allow 10 players to join up and defeat the dungeon and its boss.

This is harder than the other dungeons you face so having upgraded gear is advised and playing with a group is recommended to be successful and to speed up the process.

You continue on by farming legendary gear from either Normal or Hard Frostpillar Temple so you can replace your epic gear with the possible legendary gear, further increasing you gear score. 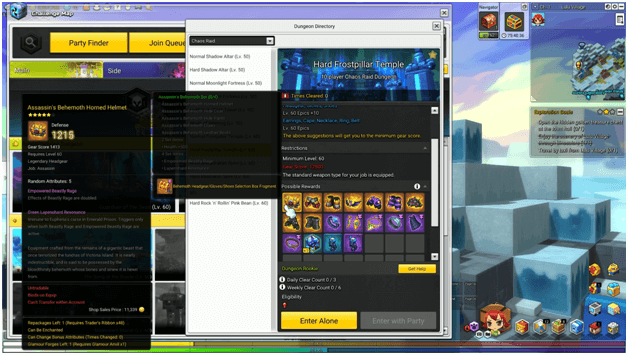 Legendary Gear is the next rarity following after epic which is considered endgame gear for most players and these provide more than just stat bonuses.

There is a bonus provided when you have more parts of a set that grants different stats and other passives that will further make your character stronger. 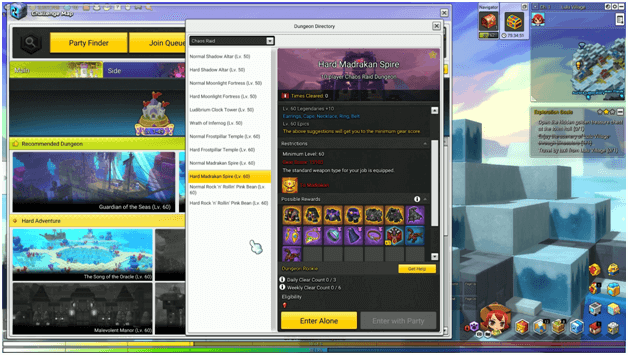 Eventually you will want to reach a gear score of 12,500 to be able to farm your first legendary gear sets so you may proceed with the Normal and Hard Madrakan Spire which requires a gear score of 15,100 to farm a stronger legendary set. 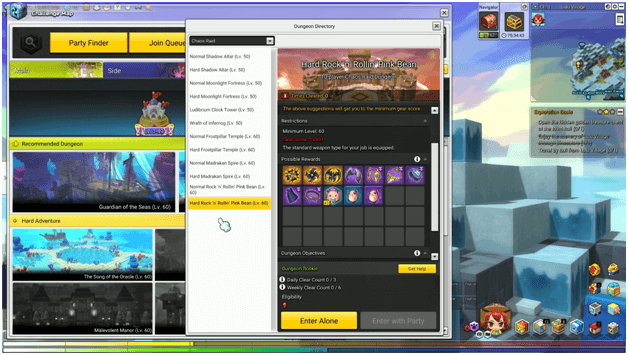 Your next target after farming Madrakan Spire is the Normal or Hard Rock ‘N’ Rolls Pink Bean dungeon where you will need to have a gear score of 19,300 and will be able to acquire stronger gear, including a new legendary weapon.

From here on you should already have a strong legendary set and farm for your legendary weapon which you will use to proceed to the next gearing phase. 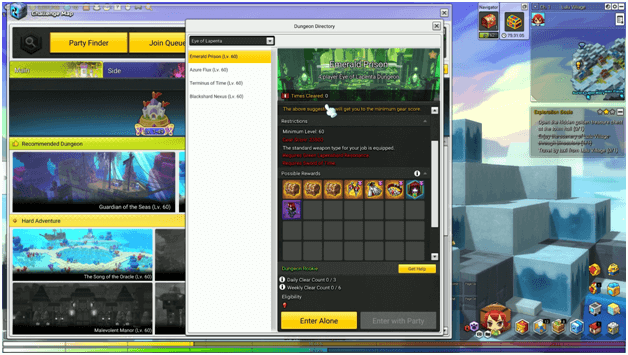 If you have tried to follow your quests, you will realize that the Eye Of Lapenta Dungeons can’t be done unless you have a gear score of 23,500 which comes after following the previously mentioned steps.

You will choose between either Emerald Prison, Azure Flux or Terminus of Time which each have slightly different rewards which you must carefully choose based on the bonus they give to your character. 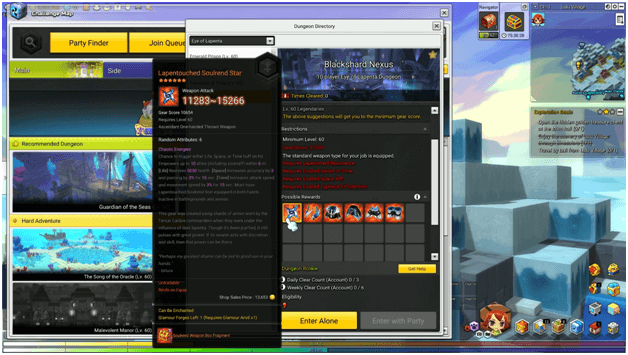 Once you upgrade to the gear from the Eye Of Lapenta Dungeons you should have a higher gear score which allow you to access the final and strongest dungeon of all, Blackshard Nexus.

The Blackshard Nexus requires 33,100 as a total in gear score and has ascendant gear as possible rewards which becomes your end game gear.

This will be very challenging and it is recommended to be with a party.

Once you have reached ascendant gear, you pretty much are in the endgame and have become one of the strongest players in the game.

After acquiring all the gear that you need, it’s time to enchant everything and reroll for the stat bonuses you want. 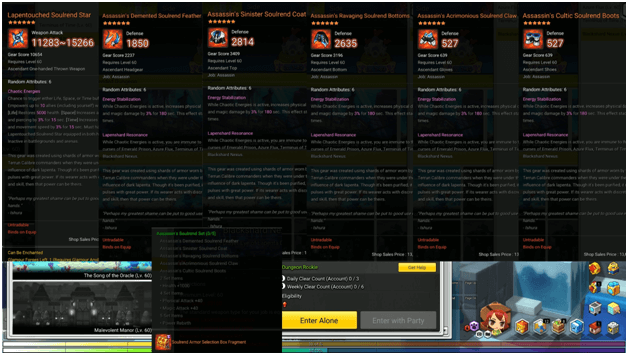 Acquiring endgame gear is probably one of the biggest achievements in MapleStory 2 and from here on you can revel in your victories, join PVP and explore the rest of what the game has in store for you.

It may seem complicated at first but once you get the hang of it, the simple steps to gearing up in MapleStory 2 focus more on increasing your overall gear score and unlocking the next tier of gear.

Following the previously mentioned steps will get you on the right track to being one of the strongest players in the game.