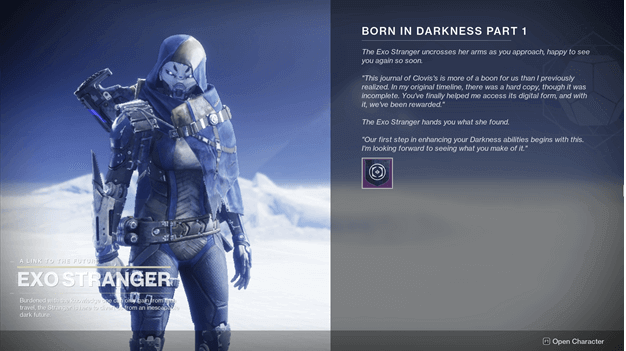 The power of Stasis was first introduced during Beyond Light and along with it, the Exo Stranger was introduced, who has ties going way back and from another darker future.

With clues of what Clovis Bray has left behind, The Exo Stranger wishes to figure out more about the secrets of Europa and needs your help.

A Skeleton Key was left behind by Clovis which needs to be empowered, which then will allow it to be used. 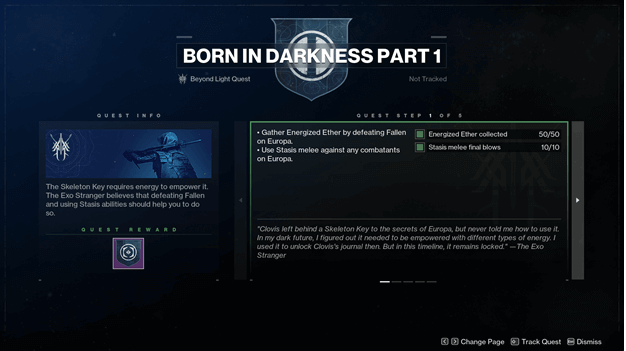 Step 1: Gather Energized Either and Use Stasis Melee Blows

The first step in the Born of Darkness Part 1 Quest requires that you complete the following to empower the Skeleton Key.

Step 2: Use Stasis Subclass in Strikes

The Skeleton Key still requires empowerment and The Exo Stranger suggests a new approach, focusing on taking out several enemies in strikes.

There is a Fallen Captain who has been causing trouble in one of the exoscience buildings, you will need to head to Eternity and defeat them.

Eternity can be found in the Bray Exoscience Lost Sector, head over there and use your Stasis abilities to remove the barrier leading to the location and defeat the platoon.

Step 4: Bring The Skeleton Key to the Exo Stranger

The Exo Stranger will be waiting for you in the Bunker E15 Lost sector, which you can head to by fast traveling to the Eventide Ruins.

You will have to complete the lost sector to unlock the way into the room where the Exo Stranger will be waiting.

Once you arrive, the Exo Stranger will start talking to you and will ask you for the key, which you will place on the table by interacting with the table.

Step 3: Regroup with the Exo Stranger

The Exo Stranger takes the key and disappears, you will need to meet up with her back at the campsite in Beyond.

Head over to Beyond (use the waypoint to get there faster) and speak with the Exo Stranger to accept your rewards and complete the quest.

You will be able to acquire the Aspect of Control quest, which will complete Born in Darkness Part 1 and add new quests to your list.

The Exo Stranger has not found exactly what she has been looking for but appreciates the help that you have given during this quest.

She explains that the main goal is not figuring out who Clovis is, but instead, to gain what he found experimenting with the Darkness Stasis.

Time is needed by the Exo Stranger and she will let you know more once she has decrypted a journal accessible now thanks to the key.