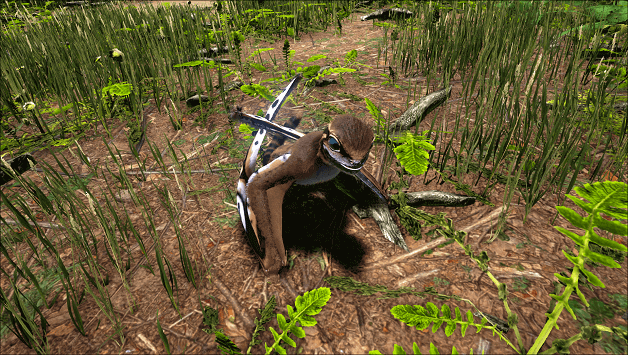 One of the later more adorable known to be introduced to Ark is the Sinomacrops, a flying critter introduced along with the Lost Island DLC.

This creature, although small in size, is more than capable of holding the weight of some creatures that are larger than its size.

Players have been able to befriend these creatures and travel with them, even being able to perform amazing maneuvers in the air to safely cross distances. 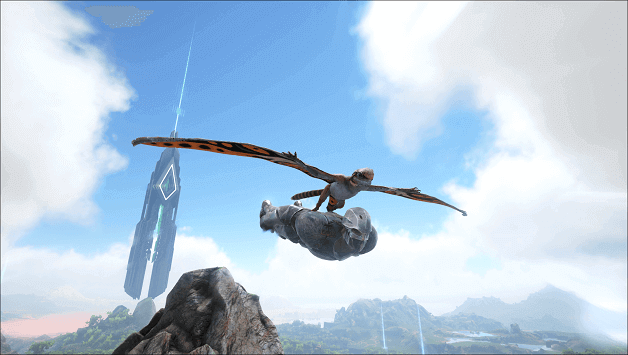 The Sinomacrops let out a shriek that scares away smaller creatures, those with a Drag Weight of 80 will be affected, causing them to run away.

This ability can be set to be used automatically when a potentially hostile creature approaches and can be accessed in a menu that you can open with:

You may also set one of your emotes to the “Clap!” emote which will cause the Sinomacrops to use the scream ability when performed.

Similar to how a Glider Suit works, the Sinomacrops can spread its wings and allow you to glide over long distances.

This is activated after jumping or when you are in midair.

The Sinomacrops raise their wings to form a parachute-like shape to reduce falling speed, making you descend safely from higher altitudes.

This is activated after jumping or when you are in midair.

Holding down the jump button will cause the Sinomacrops to constantly flap their wings, causing them to fly upward while it holds on to you, allowing you to fly.

This can be done from the ground or in midair.

Similar to a Tek Chestpiece, you can perform a jump that boosts you into the air or perform an additional jump when you are already in the air.

Perform this action by tapping the jump button twice.

Being able to grant you the ability to fly, the Sinomacrops is a game-changer that can make your character more versatile and help you traverse uncrossable ground.

No longer will you need to make Glider Suits if you have your living glider, the Sinomacrops is more than capable of gliding you over long distances.

Parachutes can take up space and add weight, a good thing the Sinomacrops can act as one, allowing you to avoid taking unnecessary fall damage or to help with moving around.

With its scream, the Sinomacrops can protect you from annoying wild creatures that may be potential threats.

How to Tame a Sinomacrops? 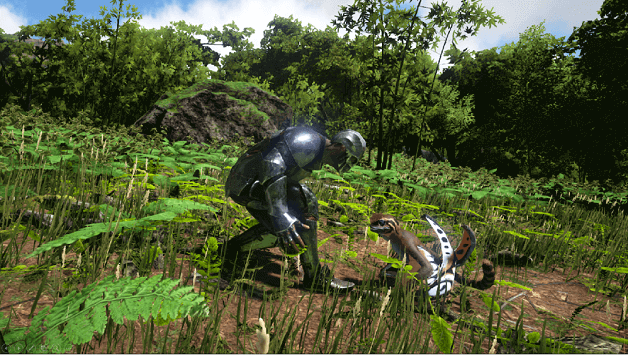 The Sinomacrops can be tamed passively by approaching it and feeding it Chitin from your last Hotbar slot once it approaches you.

Sinomacrops will cluelessly approach you and will show floating hearts above their head, signaling that you can feed them.

Once you have fed the Sinomacrops, it will fly away and you will need to follow it until it lands, repeating the process until it is tamed.

You must not sprint or jump as this creature will become startled if you do so, slow and steady will keep it calm and avoid trapping it as it won’t be tameable.

Sinomacrops are tamed with Chitin and will also require it as food to replenish its stamina, making this its main food source that you must keep plenty in stock.

The Sinomacrops is a shoulder mount and does not require a saddle, it simply sits on your back and acts as a parachute or glider whenever you need it to.

Sinomacrops can mate and once they do so, the female will drop a Sinomacrops Egg which is distinguished by its pinkish color with blue spots.

You can find Sinomacrops in several areas on the Lost Island, most of these are outer areas near the shore or water sources.

Some Sinomacrops spawn locations and rough coordinates include: 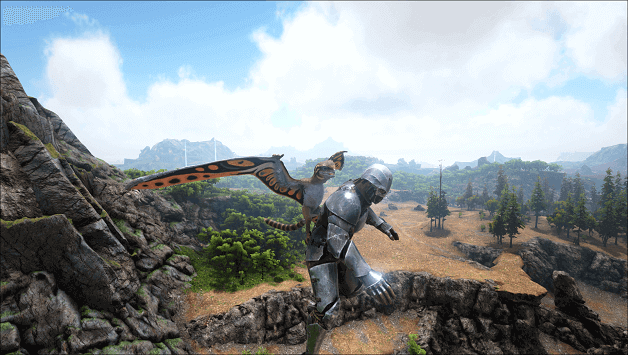 A Sinomcacrops can be a pretty useful best friend to have with you in Ark, especially with all the rough terrain and many dangers.

With this adorable creature, you can easily get out of trouble, travel across long distances, and even infiltrate enemy bases.

Nothing beats a 3 in 1 parachute, glider, and flying tame that only requires Chitin to munch on to restore its stamina, the Sinomacrops.