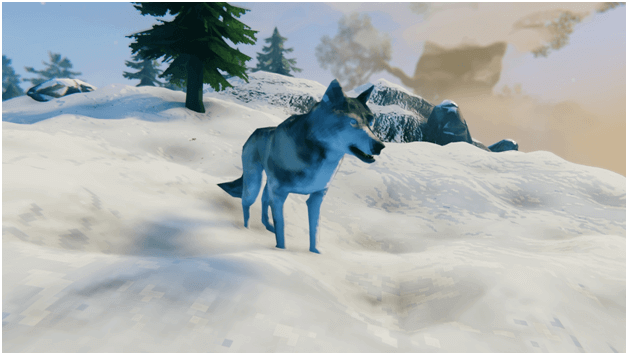 Wolves are some of the most elegant yet deadly creatures that you can find in Valheim, and owning one would provide you with several benefits.

These versatile creatures run fast, deal deadly damage, and are capable of taking down even the largest of enemies.

Taming a Wolf may prove to be a challenge to most players, but with the right strategy and knowledge, you can make these beasts loyal and fight alongside you.

What Can You Do with Wolf?

Taming a Wolf has many benefits for players, and one of them is their ability to fend off and kill other creatures in Valheim.

A Wolf has a powerful bite and is quick enough to chase down any enemy that it sets its eyes on, and it will go for the kill.

Players who have tamed a Wolf will be able to interact with them, causing the Wolf to follow them wherever they go.

If you have more than one Wolf, you can breed them to increase their population at your home or fortress.

Wolves provide great defense when your home is under attack and can swarm enemies and kill them within seconds.

You can also use wolves as livestock as long as you have at least 2 left whenever you decide to kill them for their resources.

Also read the other taming guides in Valheim

How to Tame Wolf in Valheim? 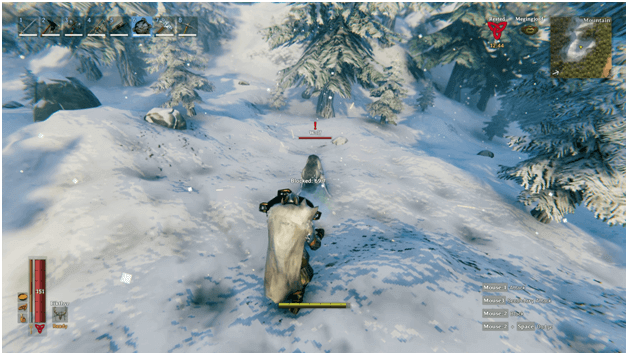 To tame a Wolf, you will need to feed it Raw Meat or Sausages while also being undetected, as the Wolf should not be aggroed.

A Wolf that does not sense you or has stopped being aggressive towards you will attempt to eat any of its taming foods nearby.

In order to feed the Wolf, you will need to throw the food item that it prefers on the ground and wait for it to eat it.

Once the Wolf has eaten the first bite, its status will change from hungry to Acclimatizing, and later on, a Tameness percentage will be displayed.

Once your Wolf reaches 100% tameness, it will be tamed and now be loyal to you and your allies.

As of now, Wolves will only eat during the day or night depending on when they were spawned or lured, and the taming process will be halted until that time-of-day returns.

How to Make a Wolf Trap?

There are different ways to trap a Wolf, but these two are the best ways for you to capture and tame one.

Stealth will be required, and you should avoid getting detected once it is trapped, or it will halt the taming process and even allow it to attack and destroy your trap. 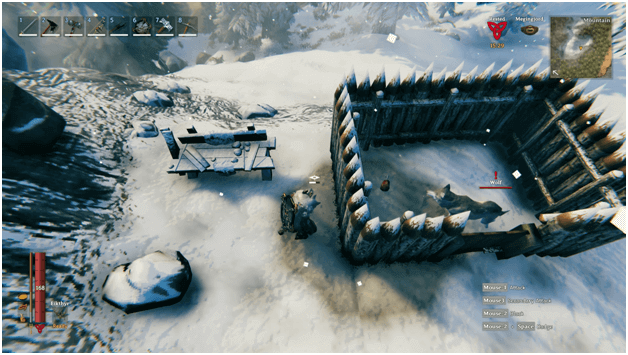 The Stakewall Trap is easy to make; you simply need to create a wall of about 2×2 or 3×3 with one wall replaced by a door.

Once the Wolf chases you, run inside the Stakewall Trap and prepare to block the Wolf’s attack with a parry.

Parrying the Wolf will cause it to be stunned for a short duration, enough for you to run out and shut the door.

It is best to leave meat inside the trap before you lure a Wolf inside, as it may become aggressive if you throw it over the door.

Once the Wolf has been trapped inside, make sure you do not allow it to detect you by staying hidden behind the stake wall and sneaking if you are nearby.

If the Wolf attempts to destroy your Stakewalls, use your hammer to repair them but avoid running around as this will cause it to detect you. 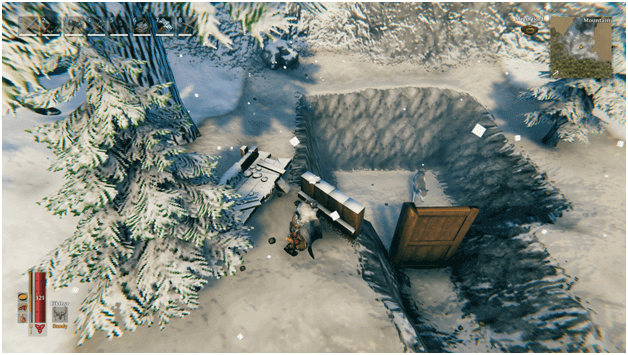 The Pit Trap is used to ensure that the Wolf cannot break out of most of the sides and only leaves a door or gate remaining for you to close and open.

Dig two or three blocks down and form a square or rectangle (any other shapes will do) and make sure that there is a pathing for the Wolf to enter.

Place a door and open it before you go out to find a Wolf (leave meat behind as well, so you don’t have to toss it later on) and lure it into the trap.

Once the Wolf is in the trap, parry its attack to stun it or simply run out and quickly shut the gate or door behind you.

You can get a good view of the Wolf from above, but it may be necessary to put at least a wall or half a wall to prevent it from seeing you.

Wolves currently only eat Raw Meat and Sausages, but these two seem to have the same taming rate, so it is best to use Raw Meat.

You can throw multiple stacks of either Raw Meat or Sausages and wait as the Wolf will eat them one at a time until tamed.

The following can be fed to Wolves:

Wolves spawn in the Mountains biome and will usually be deeper within it or at the side of the mountains located in the biome.

It is possible to tame Wolves at an earlier time in the game by running to the Mountains biome to lure a Wolf to a nearby trap.

Wolf Despawn usually happens when the time-of-day changes, and this also means that if you leave a Wolf in a trap, it can despawn after a while, so you need to stay close by to tame one.

Like most creatures in Valheim, a Wolf will drop certain items by chance and may have guaranteed drops as well.

The following are dropped by Wolves: 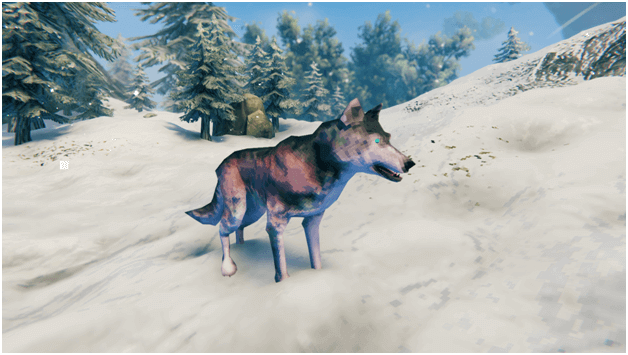 The higher the Wolf’s level, the larger it will be in size, and it will have a ting of red about its fur, making it appear scarier than its weaker relatives.

An increase in both health and damage comes with each of the Wolf’s levels which put its stats as the following:

It seems that there is no Wolf weakness in Valheim but they can be easily killed after a parry as they take a long time to recover.

How To Breed Wolves? 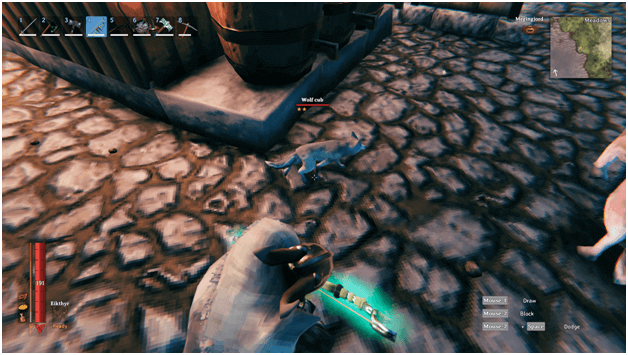 You can start Wolf breeding when you have two or more of them that have already been tamed, and different level Wolves can breed with each other.

To breed Wolves, you simply need to feed both Wolves, and they will mate if they stay near each other long enough.

A good technique for making Wolves breed is to make a pen and toss a stack of Raw Meat or Sausages, and they will continuously breed even if you are away.

Only a certain number of Wolves can be in an area if you want them to breed, and the larger the pen, the more breeding will happen.

After two Wolves mate, a Wolf Cub will be born and will start to grow into a fully grown Wolf, retaining the level of its parents.

Breeding Wolves with different levels will make the Wolf Cub have a random level from one of its parents.

Wolves will breed even if they are following you, and you can use this to your advantage to prevent them from wandering if you do not have a breeding pen made. 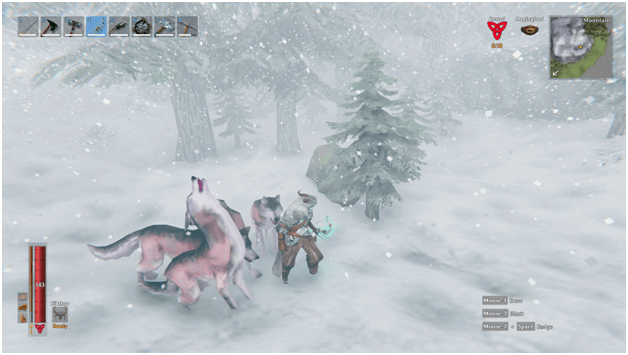 Wolves deal slash damage which does extra damage to enemies who are weak against it, and with each level, this damage becomes greater.

Currently, you can only get Wolves to follow you as the other tameable creatures in the game will wander around only.

Wolves make great travel companions and help defend your base when you are busy or currently away from keyboard.

It takes about 3 ingame days to tame a Wolf, and this is because they will not eat at their opposite time of day.

Always breed your Wolves before releasing them or else you could lose them forever and avoid getting too far when taming as they will despawn.

There is no Wolf portal traveling and instead of following you to your destination, it will be left behind on the other side.

You can make Wolf armor with the resources farmed from Wolves including the Wolf Cape.