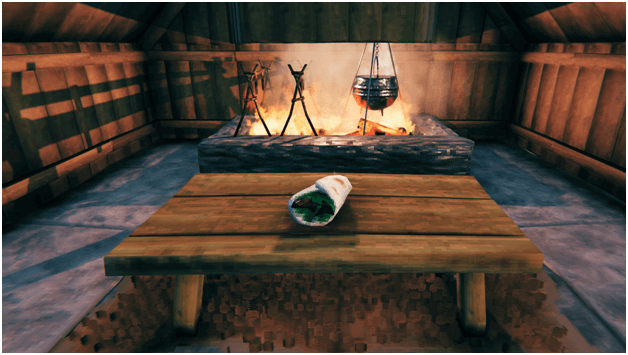 Fish Wraps may appear more like a delicacy in Valheim and looks much like a burrito somehow, but it is also one of the highest stamina buff items in the game.

Of course, Fishing will be a necessity for Fish Wraps, and the effort to get the fish to craft this item is worth it.

Fish Wraps provide your character with a massive boost in stamina as well as a considerate amount of health and regeneration.

Fish Wraps weigh an amount of 1.0 per piece and can be stacked up to 10 per item slot, making each stack of it weigh 10 per slot.

While stamina is significantly increased when Fish Wraps are consumed, players also benefit from a good amount of health and health regeneration during the item’s buff period.

Fish can be obtained by Fishing, obviously, and you will need to cook the fish at a Cooking Station before you can use the Cooked Fish for making Fish Wraps.

For more info on Cooked Fish, check out our guide on How To Make Cooked Fish in Valheim.

Barley Flour can be obtained in the late game and used once you have defeated Moder (Fourth Boss), allowing you to build the Artisan Table and later on a Windmill.

To understand more about Barely Flour, you can learn more with our guide on How To Make Barley Flour.

The Windmill is necessary for producing Barley Flour using Barley, which you obtain first by taking from Fuling settlements on cultivated land that you can farm later on by planting.

How To Cook Fish Wraps?

The Fish Wraps recipe can be cooked once you have obtained Fish and Barley, but you will need to process Barley into Barley Flour first, which becomes available after defeating Moder.

Once you have all the ingredients for Fish Wraps, you can cook this food item in the Cauldron.

Each time you craft this food item, you will receive 1 Fish Wraps per 2x Cooked fish and 4x Barley Flour.

If you prefer a lot of stamina, you can use Fish Wraps and other food items that buff stamina, but this also goes well with other late-game items for a good combination of health and stamina.

Players who prefer more stamina will use Fish Wraps to allow their characters to perform more actions, last longer in combat and sustain movement in Valheim.

Not only does Fish Wraps provide a large amount of stamina, the decent amount of health and health regeneration make it all more worth the while.

Players may have a harder time getting fish in Valheim but things can get easier if you check out our Valheim Fishing Guide.