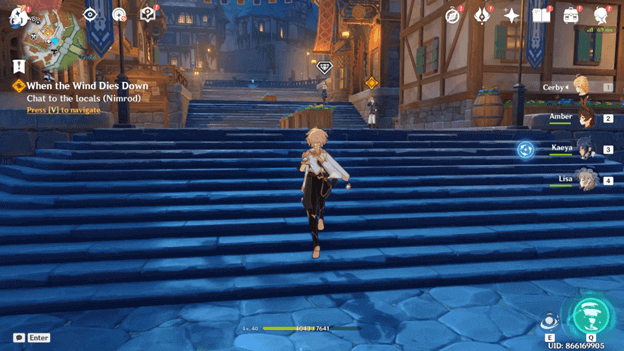 After the long fight with Dvalin and all the other tedious tasks that came before that, you finally return to Mondstadt City.

It appears that while you and the team were out solving the Stormterror issue, a lot had been going on in the city.

Amber greets you near the entrance of the city and offers you a meal later after you have checked in with the locals.

How To Get When the Wind Dies Down Quest?

After you have completed A Long Shot and have saved Dvalin, When the Winds Die Down quest will be started immediately after the cutscene.

When the Wind Dies Down Quest Objectives 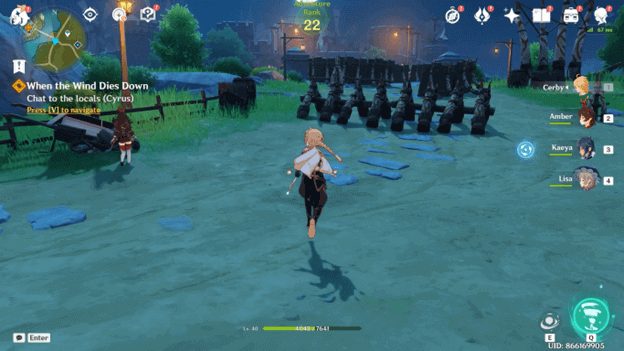 Once you return to Mondstadt, Amber will greet you and there will be a bit of talk about what has happened during the team’s absence.

It appears that the Hilichurls have gotten more aggressive but Amber was already one step ahead of this and the city was prepared for an attack.

After talking, Amber invites you to have a meal at Good Hunter and tells you to wait for her there but first, you will need to make a few stops.

This objective will trigger if you destroy one of the Hilichurl barricades and after that, you will need to destroy 13 barricades in total.

After destroying the barricades, head over to Otto, who will thank you for your help in clearing out the battlefield.

He will reward you with the following:

As you make your way to Good Hunter, you will need to speak with the locals, starting with Cyrus, who will be near the steps as you enter the city.

Speak to him and he will tell you how he is disappointed to have missed out on the action and the Acting Grand Master’s speech.

5) Chat to the Locals (Nimrod)

After speaking with the disappointed Cyrus, head over to Nimrod, who will be nearby Cyrus up ahead near the With Winds Comes Glory Souvenir Shop.

Nimrod will be happy about your success and will be glad that the trade routes are now finally open and things can get back to the way they were.

The last person you will need to talk to before meeting up with Amber is Grace, who will be across from where you talked to Nimrod.

Grace will be thankful for what you and the team have done and will be happy that in the end, everything worked out fine.

Kaeya will be honored to be in the presence of Mondstadt’s hero and will tell you about what he has discovered regarding the Abyss Order and their leader is known as “The Princess.”

As you are talking, Kaeya notices Amber approaching and quickly scurries off as he thinks she may be angry with him for his absence during the attack on the city.

Amber begins talking to you about Kaeya for a bit and afterward, she orders Sticky Honey Roast for everyone to enjoy. 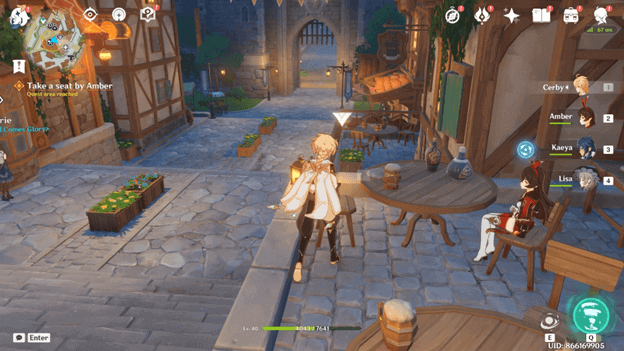 After Amber has made her order, you will need to head over to the chair near Amber and take a seat, which will cause a cutscene to begin.

You, Amber, and Paimon will be enjoying the delicious meal while also discussing what plans you have after the whole Stormterror ordeal.

After enjoying the meal and conversation with Amber, she bids you farewell and lets you know that Jean is waiting for you at the Cathedral.

When the Wind Dies Down Rewards

After you have completed When the Wind Dies Down quest, you will receive Adventure EXP, and Mora as well as additional rewards. 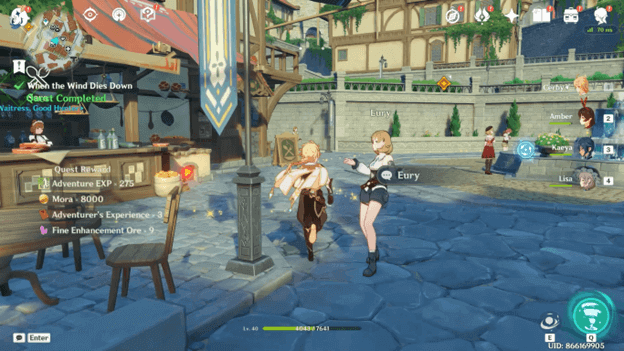 After all the trouble you went through with Stormterror, things have finally become a bit more peaceful in Mondstadt City but there is still more to do.

It appears that the Abyss Order had a big role to play in the ordeal that involved Dvalin and they are up to even more schemes based on Kaeya’s investigations.

Amber finally was able to treat you to a nice meal of Sticky Honey Roast but it appears Jean needs to talk to you and is currently waiting to have a word.