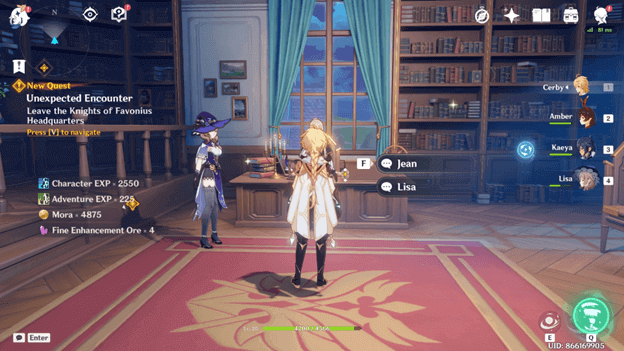 After recently being granted the title of Honorary Knight and being asked to further help out with the Stormterror issue, you keep an eye out for clues.

As you leave the Knights of Favonius headquarters, you will stumble upon someone who is a familiar site from before.

During this quest, you will pursue the mysterious person who seems to have a connection to the Stormterror issue and will need to find out more.

How To Get Unexpected Encounter Quest?

The Unexpected Encounter quest is the second quest that you will obtain during Prologue Act II – For a Tomorrow Without Tears. This quest begins shortly after you have finished the Shadow Over Mondstadt quest, setting you out to search for more clues about the Crimson Crystal. 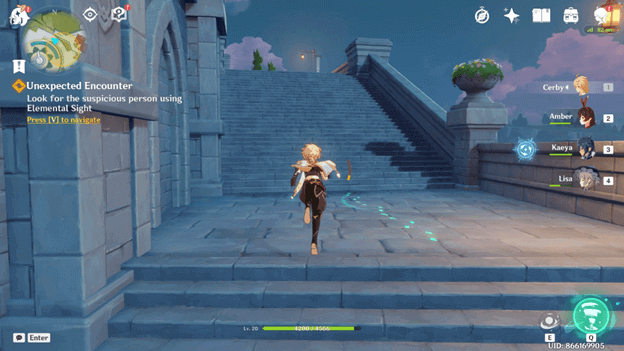 1) Leave the Knights of Favonius Headquarters

After your conversation with Jean and Lisa in the Knights of Favonius Headquarters, you will need to exit the building and head outside.

Once you are outside of the headquarters, Paimon will have gone ahead of you and will be nearby waiting to talk to you.

Go to Paimon, whose location will be marked with a waypoint and will only be a few seconds away from the exit.

Once you start speaking with Paimon, she will start talking about something you did not mention, which later on is the mysterious person.

As the both of you are talking, it will appear that the same person is in Mondstadt, and was just seen by Paimon.

3) Look for the Suspicious Person

After realizing that the person who was just seen was the person that was in the forest Stormterror, you decide to search for them.

The person was last seen running below and you will need to head to the last location he was seen, which will be in a marked area.

Once you arrive in the area, Paimon will say that he has disappeared and tells you to use your elemental sight, which reveals the mysterious person’s footprints.

While using your Elemental Sight, you will need to track down where the mysterious person went which eventually leads to a wall.

You will need to climb up the wall and continue your search for the mysterious person, who will, later on, be in an area crowded with people.

The quest here will end at this point and you will immediately receive a quest called That Green Fellow afterward.

After you have completed the Unexpected quest, you will receive Character EXP, Adventure EXP, and Mora as well as additional rewards. 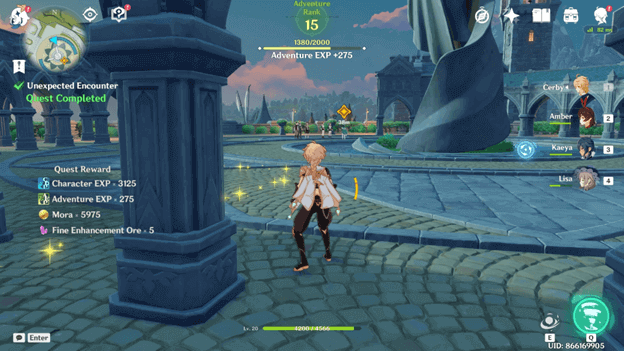 The chase is over and it seems our mysterious person did not really run from you at all and was instead merely roaming around Mondstadt.

In the end, it turns out he is not eluding anyone, has simply stopped in front of a crowd and seems to even be performing in front of them.

It looks like this time you will be able to figure out what his connection with Stormterror is and this might reveal more for the Knight of Favonius to come up with a solution.