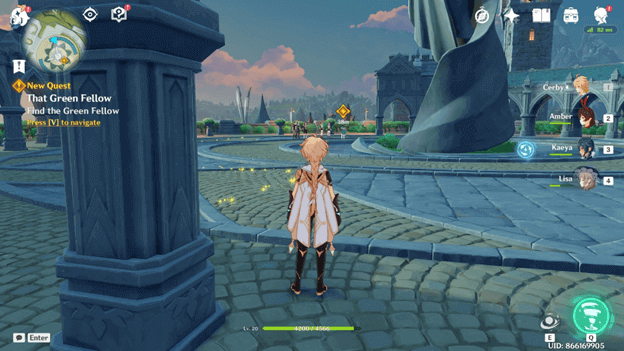 You have previously seen the person in green fleeing around the city who is the same person you saw with Stormterror in the forest.

Now that you have tracked him down using your elemental sight, you have spotted him nearby in a crowd performing.

This will be your chance to find out who the person is and figure out what his connection to Stormterror might be.

How To Get That Green Fellow Quest?

Following shortly after you have completed the Unexpected Encounter quest, the quest called That Green Fellow will be obtained. This will be the third quest that you will be doing during the Prologue Act II – For a Tomorrow Without Tears. 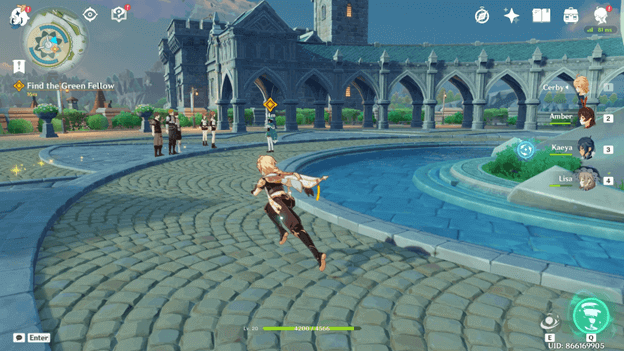 Following previously where you left off during the Unexpected Encounter quest, you are now near the green fellow.

He will be amongst a crowd of people performing in front of them and you will need to head towards him and speak with him.

2) Listen to the Bard’s Performance

Once you reach the mysterious person’s area, a cutscene will begin and this will be his performance telling the tale of Stormterror.

During this performance, the mysterious person who is now seen to be a bard speaks of Stormterror and a bard, who later on is revealed to be himself.

The bard tells the tale of how Stormterror was corrupted by another dragon which caused it to fall into a heavy slumber and awaken in the state he is now.

It is during this cutscene that you learn about the Crimson Crystal, which is a tear from Stormterror. 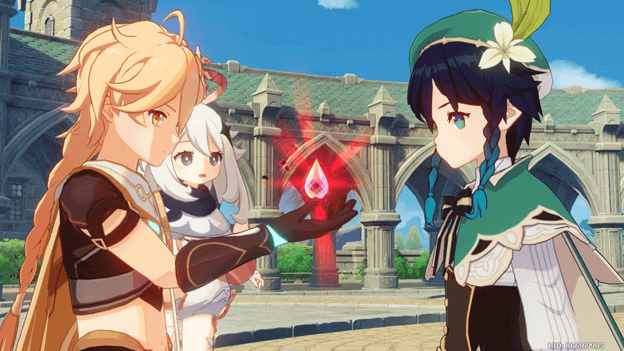 3) Talk to the Mysterious Bard

Once the bard has finished his performance, the bard will introduce himself during a cutscene and is later on revealed to be Venti the Bard.

Venti greets you without a single bit of fear and a bit after, you show him the Crimson Crystal which appears to have changed.

To everyone’s surprise, as you hold out the Crimson Crystal, it is no longer red but it is now purified for some reason and later to be revealed as a Teardrop Crystal

Venti hands you another Teardrop Crystal, which is also purified once it comes in contact with you, and later on leaves, completing the quest.

After you have completed the That Green Fellow quest, you will receive Character EXP, Adventure EXP, and Mora as well as additional rewards. 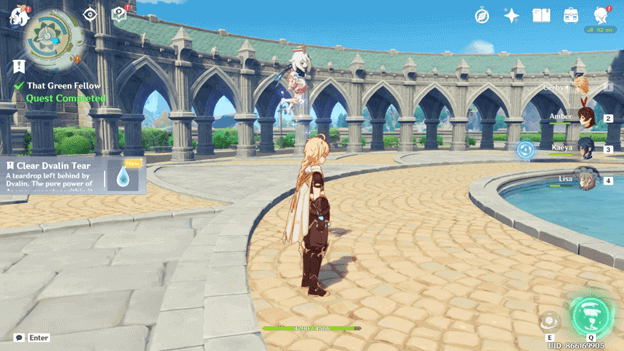 Things have started to come together and it looks like Venti is somewhat tied to Stormterror, knowing much about its past and why it has become so angry.

The Crimson Crystal known now as a Dvalin Tear was purified by you in a way that nobody seems to understand.

While Venti has run off again, it looks like he will play a big part in figuring out how to solve the whole Stormterror issue in Mondstadt.