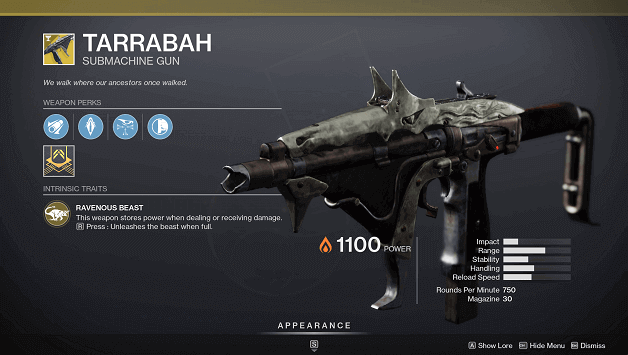 We walk where our ancestors once walked.

The Tarrabah is a ravenous Exotic Submachine Gun that seems to consume enemies to empower it as well as its wielder.

This Exotic Submachine Gun is capable of firing 750 rounds per second or 900 when its Ravenous Beast ability is active and has a magazine that holds 30 rounds.

Killing enemies can fill the Tarrabah with power which allows its user to unleash a buff that provides several bonuses, turning the Tarrabah into a “beast”.

The Tarrabah was a reward for completing the Crown of Sorrows raid but now this is unavailable and you can instead purchase the Exotic Submachine Gun now.

You can now obtain the Tarrabah by purchasing it from the Exotic Archive at the Monument to Lost Lights.

The following are needed to purchase Tarrabah:

The Tarrabah has a weighty barrel extension.

Rounds fired from Tarrabah cause extra damage to combatants’ shields and overpenetrate targets.

Tarrabah is optimized for recoil control.

The Tarrabah stores power when dealing or receiving damage, which can be released once it has been fully charged, unleashing “the beast”

Thanks to the Bottomless Appetite trait, you can prolong the ability, which lasts 7 seconds by dealing continuous damage.

There is currently no Tarrabah Catalyst at the moment and it is not confirmed if one will be added in the future.

Like most Submachine Guns, the Tarrabah may have a lower amount of damage but this is made up for because of its Ravenous Beast trait.

All you need to do is kill a few enemies and you can store enough power to provide yourself with an insane buff that makes it easy to kill enemies.

Since the Bottomless Appetite perk extends the duration, you can go on a killing spree by prolonging it by dealing damage to enemies.