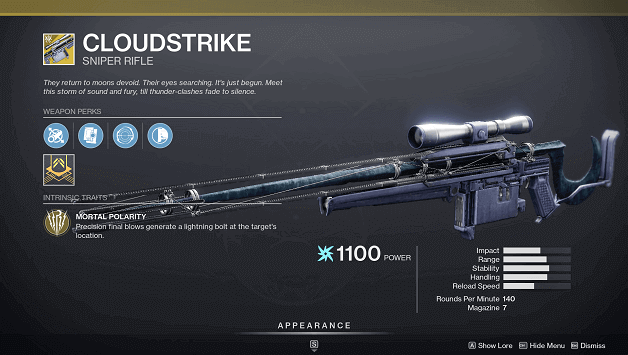 They return to moons devoid. Their eyes searching. It’s just begun. Meet this storm of sound and fury. Till thunder-clashes fade to silence.

It appears lighting actually does strike twice and the Cloudstrike especially, is just the Exotic Sniper Rifle that can prove it.

This Exotic Sniper Rifle can fire off 140 rounds per minute and has a magazine capacity that holds 7 rounds.

The Cloudstrike is famous for its ability to cause lightning to strike areas when precision hits are dealt or precision kills occur.

Cloudstrike is different from other Exotic Weapons when it comes to obtaining it, requiring that players grind Empire Hunts.

Empire Hunts can be obtained from Variks and these are eventually unlocked as you progress through Beyond Light.

Unlocking Empire Hunts requires that some missions on Europa are to be completed, which eventually happens when you follow the main story.

Cloudstrike is equipped with an ultra-light barrel.

Cloudstriker reloads faster when its magazine is empty.

Dealing rapid precision hits with the Stormbringer creates a lightning storm at the point of impact.

The Cloudstrike is optimized for recoil control.

Mortal Polarity is great for taking out enemies that are close to each other and with the addition of Stormbringer, a lot of damage can be done with Cloudstrike.

There is no Cloudstrike Catalyst and it is unsure whether there will be one added in the future but the Exotic Sniper Rifle is quite powerful without one.

The damage dealt by Cloudstrike alone is powerful and if you add the lightning strikes and lightning storms that it summons, it gets even deadlier.

The technique with Cloudstrike is to always focus on dealing precision hits to get precision kills, summoning lightning strikes.

If you are accurate with this weapon, you will be landing lightning strikes along with lightning storms, causing excessive damage in an area.