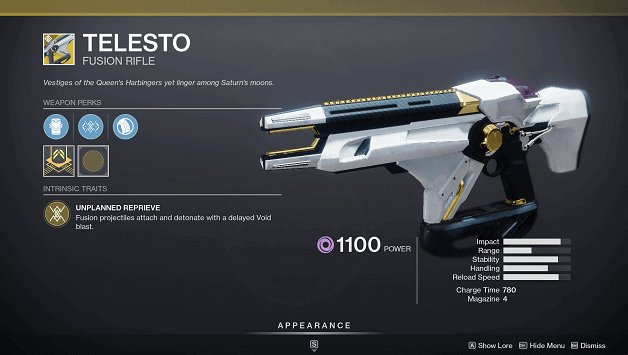 Vestiges of the Queen’s Harbingers yet linger among Saturn’s moons.

The Telesto is an Exotic Fusion Rifle that has a habit of firing projectiles that stick to enemies or surfaces before exploding.

This Exotic Fusion Rifle has a charge time of 780 and a magazine capacity that hold 4 rounds before it needs to be reloaded.

The sticky projectiles that it fires tend to explode after a short amount of time, dealing more damage to enemies in an area.

How To Get Telesto?

While it is believed that the Telesto is only available as drops from certain missions or Lost Sectors, there are multiple ways to obtain the Exotic Fusion Rifle.

You may obtain Telesto from the following sources:

Multikills with Telesto immediately reload your equipped Kinetic and Energy weapons from reserves.

The Telesto’s grip is made of lighter material.

Fusion Projectiles attach and detonate with a delayed Void blast, causing extra damage to occur to enemies or in a small area around the explosion.

This makes your shots stick to surfaces or enemies for a short amount of time before exploding, dealing Void damage to enemies in range.

You can use this to easily plan out where you want to fire, especially if enemies are moving, thus allowing you to shoot ahead to get them with the explosions.

The Telesto Catalyst provides the Exotic Fusion Rifle with the Deeper Pockets perk, which increases its ammo reserves.

You can do a lot more with the extra ammo since it is quite addicting to launch volleys of its sticky projectiles to blow up enemies with Void damage.

The Telesto plays well with other weapons, reloading them when multikills are done, which is quite helpful when switching between weapons.

This Exotic Fusion Rifle is capable of dealing a lot of damage, especially when its projectiles are focused on one area.

You can use the Telesto to take out bosses or large groups of enemies since the damage and explosion are good sources of damage and can hit multiple targets easily.