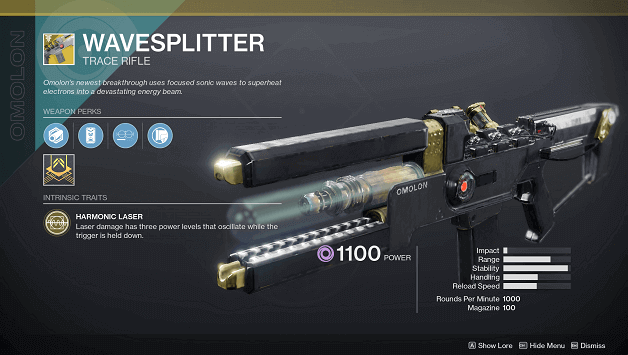 “I couldn’t afford to miss. Not when it was his life on the line.” –Marin Mansanas, Tangled Outrider

This Exotic Trace Rifle is capable of firing 1000 rounds per minute and has a magazine capacity that holds 100 rounds.

The harmonic beam that this weapon fires changes from low to high and back as the weapon’s trigger is held down.

You may obtain Wavesplitter from the following sources:

The Wavesplitter has a barrel optimized for recoil reduction.

The Wavesplitter has a strong battery life.

Collecting an Orb of Power grants a short period of maximum power that starts with an automatic reload.

The stock of the Wavesplitter makes it stable but heavy.

Laser damage has three power levels that oscillate while the trigger is held down, changing the amount of damage between intervals as the beam is fired.

This makes it important for you to be accurate with the beam in order to maximize the amount of damage that can be dealt.

When you collect an Orb of Power, there will be a short duration where this damage is at maximum power.

The Wavesplitter currently does not have a catalyst and there is no evidence of it being added anytime soon.

While seemingly one of the stranger weapons, Wavesplitter is capable of dealing an immense amount of damage as long as its traits are considered.

Harmonic Laser can be quite challenging if you cannot keep the beam focused and continuous when targeting enemies but if you can, the damage can be outstanding.

Using abilities is a great way to generate Orbs of Power to maximize the Harmonic Laser, which should be done often for the best damage output.